10 Tourist Places In Italy That Are Sinfully Gorgeous 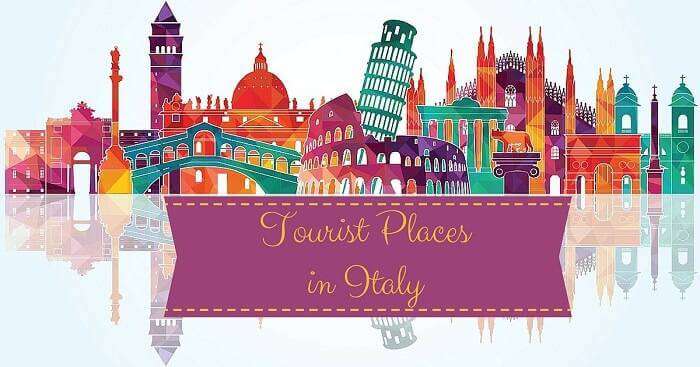 Italy is a beautiful country, globally loved for offering an eclectic blend of tourist attractions. Tourists, on one hand, love to enjoy amazing the Roman ruins of Pompeii, Rome, and Herculaneum, and on the other, can’t resist visiting Venice and Tuscany for their romantic appeal.

The country is also known for its natural attractions and scenic landscapes that transport you to another world. They are enchanting, captivating and dumbfounding to say the least. Actually words don’t do justice at all. You got to see them to believe us. But we won’t let you get lost in the maps!

10 Places To Visit In Italy

Here are the top 10 cities, which are also the top hubs of tourist places in Italy, that are sinfully gorgeous. You just can’t resist their seduction!

Before we go to the details, a quick look at the grandeur of top tourist places in Italy!

Image Source
Tuscany has always been the center of business, art, and politics in Europe. Among the most beautiful places to visit in Italy, the city also gained a lot of prominence as a major city of the Renaissance Period. Amazing work of art can be seen and enjoyed by the art lovers coming to this city. Tuscany is also known for its amazing crafts. Materials used to create amazing craft items are wood, metal, leather, marble, wool, and more.

Key attractions: The Gallery of Uffizi known for its amazing museums, treasures, palaces, and churches; amazing views of Siena and the Palio; the famous Leaning Tower of Pisa and Piazza dei Miracoli for their unique architecture; beautiful villages; and the scenic vineyards of Chianti.

Image Source
Naples, located within the Campania region, is nestled amidst the Phlegraean Fields and the volcanic region of Mount Vesuvius. This city is not only known for its stunning locales, but also famous for its rich history and culture. Among the best toursist attractions in Italy, the city has the maximum number of architecturally renowned churches.

Best time to visit: September – October and March – May

Suggested Read: 7 Day Trips From Rome To Take In 2018 To Savour The Timeless Charm Of Italy !

3. Italian Lake District – The city of lakes and fashionistas

Image Source
Located in Italy’s Northern Region, the Italian Lake District is known for its beautiful lakes. This region has been one of the famous Italy tourist placessince the Roman times. Every year, a large number of tourists visit this stunning destination to admire and enjoy its beautiful scenic locales, Lake Garda and Lake Como. The destination is also known for its authentic Italian cuisine, and is frequented by fashionistas to explore the boutiques.

Best time to visit: September and May

Must Read: The Travel Account Of His Trip To Italy Is A Real Inspiration For Travelers

4. Sicily – Wandering in the ruins is fun too!

Image Source
Sicily is most popular among the tourist places in Italy for its ancient Greek ruins. The destination has been ruled by Romans, Vandals, Byzantines, Arabs, and Ostrogoths. The glimpses of their rule can be still seen in the ruins. The remains of the amazing architectural achievements of the Norman Era also attract a large number of visitors. The period architecture is the major attraction in the city and is appreciated by visitors who wish to know more about the bygone era and its triumphs.

Suggested Read: 10 Day Trips From Florence To Satiate Your 2018 Wanderlust!

Referred to as “The Five Lands”, Cinque Terre is one of the prettiest must see places in Italy. Beautiful vistas on the rugged coastline of Sicily are worth admiring. The five fishing villages are connected through walking trails and exploring them is a great idea. Moreover, this entire region has been declared as UNESCO World Heritage Site. The marine coastline is protected and conserved to ensure preservation of marine life as it has been since centuries. if you are looking for sightseeing in Italy, then this is a must-visit!

Suggested Read: 14 Fascinating Things To Do In Naples – An Italian City That Lives Art

Amalfi Coast is one of the most exotic European destinations, known for its ecstatic coasts bordering the Mediterranean Sea. It is perfect for exploring the nature’s marvels in Italy. Positano and Fiordo of Furore are places located close by and demand a lot of time to enjoy its amazing attractions.

Suggested Read: Vatican Museums: An Abode To Witness The Artistic Heritage Of Rome

Italy’s most cosmopolitan city, Milan is famous for football and fashion. The destination is also known for its natural attractions and fashion shows that are organized twice in a year. The city witnesses the influx of buyers, designers, and supermodels from all over the world during the shows. A great inspiration to the global fashion designers, Milan is definitely among the places to see in Italy.

Key attractions: The famous Basilica Sant’Ambrogio dedicated to Milan’s patron saint, the Monumental Cemetery of some of the notable celebrities of the place, Piazza Mercanti  administrative center of Milan, pieces of art at the Pinacoteca di Brera, and the 12th century Navigli Lombardi canal

Best time to visit: Late September – October and March – May

8. Pompeii – A walk down the lanes of history

Image Source
Located close to the Mount Vesuvius foothills, Pompeii is an ancient town, and around 80 BC, the destination became a major port town. There are many sites that offer glimpses of the Roman rule over the city, which is a UNESCO World Heritage Site today. Its discovery in the year 1748 offered a lot of information about the erstwhile Roman Empire. People love to visit this city and explore the well preserved ruins to find out more about this city.

Suggested Read: 10 Unexpected International Destinations That Are A Delight For Vegetarians

Venice – the floating city – attracts a large number of tourists all-round the year. But its beauty and romantic gondola rides make it the best among the places to visit in Italy for honeymoon. There are many canals crisscrossing through the city. The time when the destination witnesses a surge of tourists is during the Carnevale. People wearing colorful costumes and masks are worth watching in their glory. The city is replete with a lot of churches, cathedrals, theaters, and art galleries.

The sad news, however, is that Venice is slowly submerging. Yes, the city might completely disappear by 2050!

Must Read: 14 Gorgeous Places That Will Disappear From The World Map By 2050

Image Source
Rome, with its stunning sights and attractions, is a much loved destination among die hard romantics. It  has a lot of museums, art galleries, and theaters that offer an insight into its rich culture and historical past. Among the best places to visit in Italy with family, Rome allows the visitors to know more about the advancement of Western Civilization, growth and progress of Christianity, and the deep-rooted history of the archeological sites.

Key attractions: St Peter’s Basilica that is known to be  the largest and grandest church in the world, Roman Empire’s famous Colosseum with a capacity to accommodate 55,000 spectators, Piazza Navona fountains built in the 17th century, Pantheon built by Emperor Hadrian in the memory of Pagan Gods, and Trevi Fountain

So which of these places to visit in Italy are you planning to explore first? Well, don’t just sit there. Plan a trip to Italy with some of the best itineraries of Europe.

Q. What is the most beautiful place in Italy?

A. Here are a few prettiest places that are too good to miss in Italy.
1. Positano, Campania
2. Chianti Country
3. Venice at dusk
4. Manarola, Cinque Terre
5. Capri

Q. What is Italy famous for?

A. Italy is famous for its alluring charm and some of the most magnificent architectures which also earned itself a spot among the seven wonders of the world. Italy has huge contributions to the worlds of art, architecture, fashion, opera, literature, design, food, and films.

Q. What are the main tourist attractions in Italy?

A. Some of the top tourist attractions of Italy are:
1. Colosseum
2. Venice Canals
3. Pompeii. Pompeii
4. Leaning Tower of Pisa
5. Lake Como
6. Amalfi Coast

Q. What is famous in Italy for shopping?

A. Italy is famous for a number of things such as ceramics, wine, gourmet food, Italian fashion brands, artisan chocolate, shoes, and accessories which are a must-buy when you’re shopping in Italy.

Q. What is there to do in Italy?

A. Some of the best things to do in Italy are:
– Go on a Gonda ride during sunset in Venice.
– Tour the iconic Vatican Museums
– Gorge on authentic Neapolitan Pizzas in Naples
– Attend an Opera performance in a regal amphitheater
– Take a boat tour in Lake Como

Q. Which are the best beaches in Italy?

Q. Which month is the cheapest to fly to Italy?

A. Usually February is the cheapest month to fly to Italy, however, prices may vary on several factors such as advance booking, destination, and airlines.

Q. How expensive is Italy?

A. Food, travel, and accommodation is slightly more expensive in Italy as compared to other European countries.

15 Spectacular Places To Visit In Galle And Around In 2020 To Witness The Best Of This Historic City!