10 Best Solo Trips To New York For Treating The Travel Enthusiast In You! 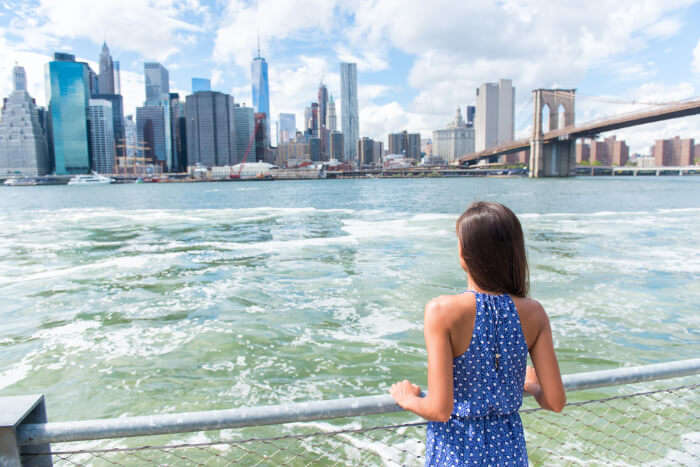 The spectacular planning, ever activeness, great shopping deals, perfect blend of modernity and tradition are some of the adjectives to describe New York. Owing to its bustling characteristic, the city attracts a lot of solo travellers. Any female travelling alone to new york need not worry regarding the safety aspect as the entire city is under strict surveillance.

10 Places To Visit On Solo Trips To New York

Take a look at the best solo trips to New York that will give you an adventurous experience and memories for lifetime!

Image Source
Name a Hollywood movie that doesn’t feature Times Square in any one of its scenes. Commonly known as the theatre district, Times Square is the birthplace of arts in America. All the major stars of Hollywood have had their humble beginnings at Times Square’s theatres. The solo trips to New York give you a fulfilling feeling by staring at the flashy billboards and the fast pace of the arena. In a life full of care, there is no time to stand and stare; a lot of spaces in Times Square are turned into pedestrian-friendly zones by restricting the movement of vehicles.

Must Read: 10 Best Homestays In New York For The Most Luxurious Staycation!

Image Source
This is the first ever park to come up in the USA. It has a long history attached to it. The place is not just another park with green meadows and some recreational zone but a mini town in itself. If you want to people watch during your solo trips to New York, then Central Park is the right choice. The significance of the park goes to the amount of planning and design that was incorporated. It was developed as a competition to the parks in Paris and London. Contemporary American style was imbibed in the making of the Central Park. Though centuries old, the place has still not lost its charm.

Image Source
Brooklyn Bridge overshadowed London Bridge with its magnificence. It was constructed with the aim of connecting Manhattan to New York. It is one of the drastic developments as water body separated Manhattan and Newyork and the water froze most times of the year. Bridging the two major commercial hubs of USA was indeed one huge achievement that helped increase the economic importance. If you are going to new york by yourself, then take a walk down the pedestrian path in the bridge to enjoy the glowing lights of the city in the night. The reflection of the skyscrapers on the river beams with all its glory.

Suggested Read: 10 Romantic Places In New York Every Couple Must Visit For A Romantic Escapade!

Image Source
Be it, immigrants or tourists, the first impression of America in one’s mind is the Statue of Liberty. It is situated in the middle of liberty island. The torch in the hands of the statue symbolizes enlightenment, the book contains the Declaration of Independence and the seven spikes in the crown is an image that liberty needs to be spread across seven seas. The Statue of Liberty was gifted to the USA Citizens by the French people on account of the 100th anniversary of American Independence. You can climb up the stairs inside the Statue of Liberty to enjoy the panoramic view of NYC. Prior booking is recommended.

Image Source
The USA has been the forerunner of world peace. The country has always intervened in the major global issues and sorted it out peacefully. One cannot simply forget the efforts of Woodrow Wilson in coercing peace between European leaders which laid the foundation for UN. Any solo day trips from new york city would cover UN headquarters. No tourist would ever want to miss the chance of clicking a picture before the magnificent UN Headquarters. Several wars and deadly crimes were negotiated here. The aura of the place provides a scintillating feel.

Suggested Read: 10 Best Theme Parks In New York That Are Perfect For The Adrenaline Junkie In You

Image Source
If you want to experience ancient Greece in the United States, then you need to visit the Federal Hall. The ideals of democracy were instilled in the constitution of USA after several historical events which took place here. The resemblance of Parthenon in Greece is a striking feature. A new building was erected and care was taken to make sure the new structure also reflected the olden architectural style.

Image Source
If you are going to New York alone for the first time and wish to experience peace and tranquillity, then you need to visit Brooklyn Heights. The rich investors built their homes here to get a view of the huge skyscrapers being erected. It is lovely to spot the majestic homes, especially during the spring season. In today’s date, the reflection of the evening brightly lit skyscrapers is a gorgeous sight from the windows of these homes.

Suggested Read: 15 New York Restaurants That Tell Why It Is The Culinary Capital Of The World

Image Source
Could you ever imagine a railway station as a major tourist spot? The Grand Central Station’s interior and exterior is no less than any heritage structures’ architecture. At one point in time, you will find it hard to even take your eyes off the murals on the walls of the station. Make sure not to miss your trains. The station is so vast and one of the busiest stations in the world.

Image Source
The Ellis Island considered as the gateway to the immigrants who stepped on the US soil with dreams of making the USA their homes. Chinatown is a unique, ethnic Chinese neighbourhood in America where the air is Asian. If you want to experience Asia in America, then visit Chinatown. You could also enjoy some lip-smacking delicacies. In fact, noodles made its way into the USA via Chinatown.

Suggested Read: 10 Best Things To Do In New York For First-time Visitors

Image Source
It is indeed great to spend some time with books that too on your solo trip to America. The main reading room is extremely gorgeous that even non-book lovers would decide to pick a book and start reading. Lovely interiors of the library, rare collection of books make it worth the visit. Constructed in the year 1895, the library beams with gothic style architecture.

Make use of these tips on your solo travel to New York.

If you are an ardent solo traveller, then you should never fail to visit New York at least once. The city’s visuals get etched in your mind that you would want to visit over and over again. It is indeed difficult to limit the list only to 10 as NYC has innumerable sights to offer to its visitors. So, don’t think too much and plan a trip to New York for the ultimate fun!