Tanzania In December: Witness Wildlife, Adventure And Nature At One Place In 2018 Winters! 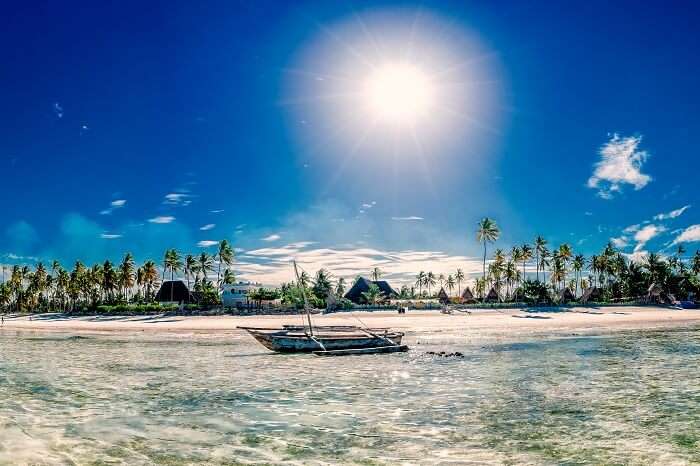 While most of the world’s popular winter destinations are covered in snow where you can barely step out, this winter why don’t spend the holidays in Tanzania? Blessed with a pleasant weather all year round, and abundance of places to see and things to do, including lazing at the beach, trekking up mountains and volcanoes, and learning about the vast wildlife of the African continent.

If you are a person who lives for the thrill of adventure, then ditch the stereotypical vacation destinations and experience the wonder of Tanzania in December. For those of you who are planning a visit, abide by this travel guide to find out the top attractions and things to do in Tanzania in December that cannot be missed out on!

Is It A Good Time To Visit Tanzania In December 2018?

If you are looking for a winter holiday destination, then there is really no better place to visit than Tanzania. Here are a few reasons as to why December is one of the best times to visit Tanzania:

Must Read: Serengeti National Park: A Detailed Guide To The Greatest Wildlife Spectacle In Tanzania

Weather In Tanzania In December

The weather in Tanzania in December is very pleasantly warm, with a slight chance of rain which is known are the “short rains”. The temperature goes anywhere between the 27 degrees Celsius to 32 degrees Celsius.

Places To Visit In Tanzania In December

Here is a list of some of the best places to see if you are planning on visiting Tanzania in December:

The Serengeti region is the pride of Tanzania, with some of the best wildlife in the country and also some of the greenest plains and forests in the whole country. The Serengeti region is also home to the only active volcano in the area, called the Ol Doinyo Lengai volcano. Spanning across a region of 30,000 square kilometres, this expanse is home to some of the most exotic wildlife species in the world such as elephants, deers, hyenas, and some wild cats like tigers, lions, cheetahs and leopards. There are many wildlife resorts in the area and you can also take a safari to explore the jungle even deeper.

One place you cannot miss out on seeing during your December visit to Tanzania is Mount Kilimanjaro, the tallest standing dormant volcano in the world. At a height of 5,895 m, this mighty mountain can be seen from far away and attracts approximately 75,000 visitors every year, who try to climb the beautiful mountain. Even if you don’t feel up to climbing the mountain, make sure to set camp up at the base of Mount Kilimanjaro for a night, as it is a magical and unforgettable experience.

Suggested Read: Explore These 15 Best Places To Visit In Tanzania To Taste The Thrill Of An African Adventure!

Also known as the Unguja islands, the Zanzibar archipelago consists of a group of islands, which once used to be an important trading point in Tanzania. Today, it is a semi-autonomous region and has some of the best sunny and sandy beaches in the country. The main town in the islands is known as Stone Town, and it has some amazing restaurants, and the best beaches to laze at or enjoy the clear waters, as well as enjoy some exciting water sports available at the beach.

The Ngorongoro region was formed from a volcano that has erupted and formed craters in the land. Today the craters have turned into a natural enclosure for wild animals such as zebras, deers, elephants, tigers, lions and many more such exotic beasts. This is also probably the best place to get a chance to see the magnificent nut highly endangered Black Rhino species. You may also get a chance to see and interact with some of the local Masai Mara tribe people, who bring their cattle here to graze during the day, and leave as the sun sets.

This vast river flows through 4 important countries in the African continent – Tanzania, Congo, Zambia, and Burundi, and forms the border between Tanzania and Congo. This is a great place to enjoy some peace and quiet, and relax in solitude among the natural waters. Lake Tanganyika is the longest known freshwater lake in the entire world, and also the second oldest freshwater lake on the planet. This is definitely a sight to see and you will definitely feel a sense of relaxation and serendipity, while you watch the waves of the calm lake go to and fro.

Best Things To Do In Tanzania In December

Here is a list of the top things to do in Tanzania in December.

Because of how good the temperature in Tanzania in December is, when the climate is not too hot and the plains are greener than ever, this is the best season to visit and go on a wildlife safari, and get really close to the animals and watch them in their natural habitat, and not in a replicated environment you would find in any other place. Some of the best places to go on a wildlife safari in Tanzania are the Serengeti region, Masai Mara, Ngorongoro Conservation Area and other national parks.

Suggested Read: New Year In South Africa: 10 Things To Do To Welcome It With Some Sass

No trip to Tanzania is complete without visiting the beautiful Zanzibar islands and soaking in the sun at the many beautiful beaches in the region. If you thought the beach and the waters look good from the surface, then you should really take a dive and go scuba diving and explore the great deep underwater world of Tanzania. If you are not feeling up for scuba diving you can always go snorkelling which is the less extreme version of scuba diving.

They say that you don’t really get a taste of the local life of any country you visit till you interact with the local people. Aside from all the nature, you should pay a visit to this village to see the way of life of the local people, in their homes and in their natural surroundings. The local people are extremely friendly and open up their homes to tourists with a wide smile. You can use this opportunity to interact with the people and learn about their cultures, their language and their ancient traditions.

4. The Birthplace Of Freddie Mercury

The famous lead singer of the band Queens, Freddie Mercury was born right in Tanzania, in Stone Town on the islands of Zanzibar. You can visit his house and see the place where he spent his childhood, and also grab a drink at the Mercury bar in Stone town. However, this town is not all about Freddie Mercury, Stone town is a UNESCO recognised heritage site and there are plenty of other attractions for you to see and explore in this beautiful island town.

Treat yourself to a luxurious treat and take off in a hot air balloon for the ride of your life. It’s always a great experience to see the beautiful Serengeti plains from a different perspective, and also watch the mesmerizing crimson sunset while you soar among the clouds. Another perk of this adventure is that you get champagne at the end of your safari in the evenings, or a breakfast buffet if you do it in the mornings!

With so many amazing things to do in Tanzania in December, and with the holiday season just around the corner, don’t hesitate to make Tanzania your next holiday destination! And while you’re making up your mind for this African destination, plan your customized Tanzania holiday with TravelTriangle!

Q. In which months does it rain in Tanzania?

A. It rains in the months of March, April, and May.

Q. What is the best month for an African safari?

A. The best months for an African safari are from July to October.

Why You Should Visit Kerala In Spring? Here Are The Beautiful Reasons That’ll Get You Going!

31 Places To Visit In Mahabaleshwar For A Refreshing Maharashtra Trip In 2020!