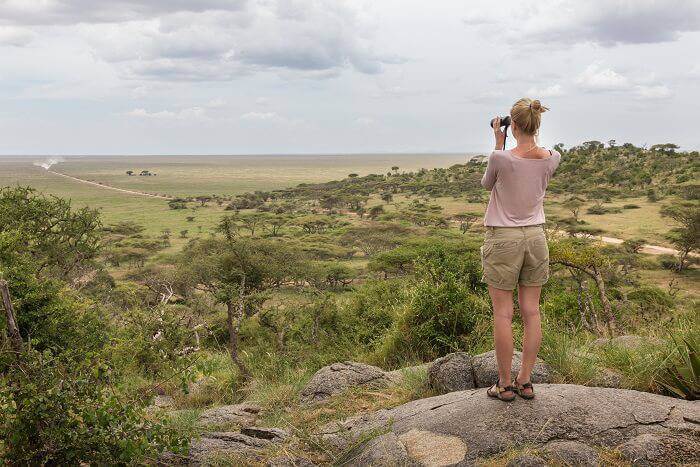 Tanzania is a place worth visiting any time of the year. The natural attractions such as the active volcanoes and the wildlife expeditions are something to revel in. Nature never fails to surprise us and so does Tanzania. Tanzania in November is the perfect time to experience the wildebeest migration. The northern circuit of the country has the finest National Parks to get on a safari and watch some endemic species of birds and animals. Tanzania is also famous for some coral reefs and beaches that one can enjoy in the warm weather of the country.

Weather In Tanzania In November

The short rainy season in Tanzania begins in November that will last up until March. The short occasional rains differ depending upon the region one decides to visit. The day temperatures in Tanzania in November are at an average of 28℃ and the nights get pretty chilly when the temperatures drop to 16℃. Visitors can expect slight humidity with the rains. Since it is a low tourist period, it is the best time to go on the safaris and mountain trekking without much foot traffic.

Things To Do In Tanzania In November

Here is all that you can experience in Tanzania. Let yourself loose in the wild in this African land.

They cross the river Mara and take refuge back at Serengeti giving the visitors the once in a lifetime experience of watching thousands of the wildlife in herds. The migration takes place annually where the wildlife moves in a circle in search of greener grasslands. The first wildebeest migration happens in the month of July when the beasts move towards Kenya and in November when they move from Kenya towards Serengeti. The November migration is then followed by the calving season in the coming months.

The best way to watch the safaris is by booking them through the mobile camps that are set up in the Serengeti National Parks. They are generally set up near the herds and thus move two to three times to different locations in a year. Apart from these, there are some permanent lodges available in the park and the accommodation is easier to get in this low tourist season.

Since the dry season gets a turnover from the occasional showers of November, it makes it the best time to visit Tanzania to watch the predators lunging at the lesser wildlife. There are about 17 game reserves in Tanzania and Selous Game Reserve is the best one to visit in November. It lies in the southern circuit of Tanzania where migration does not take place. It is the second largest conservation area in the whole of Africa and is unadulterated by civilization.

The scarce foliage allows one to spot the animals easily and thus have high chances of watching the congregation of wildlife. Selous Game Reserve has two major rivers flowing through it and only the north part of the Rufiji river is allowed for tourism. The less availability of water makes the chances of crossing paths with the wildlife high at the watering hole. One can spot animals like the hippopotamus, tusker elephants, zebras, black rhinos, leopards, lions, hyenas, and the likes.

The reserve also offers a boat safari along the Rufiji river that allows a closer view of some animals and birds. Selous is also known for conserving a high number of species of birds and reptiles. It is a good region for those who are interested in bird watching. Walking safaris are also organized in the parks.

The beach capital of The United Republic of Tanzania, Zanzibar is known for its white sand beaches and crystal clear waters. It has been a major trade port since the time of the Arab rule in the Zanzibar archipelago. It is located 80 km north to the former capital of Tanzania, Dar es Salaam in the Indian Ocean. It is the hotspot for many music and beach festivals in Africa.

The rare afternoon showers of November weather in Tanzania do not affect the fun on the sunny beach much. One can indulge in water sports and beach sports or opt for a quieter historical walk in the capital of the mainland. Stone Town is rich in history and Swahili culture. Follow the cobblestone paths in the city to visit the Old Fort, the House of Wonders, the Sultan’s Palace, Forodhani gardens and the Persian Bathhouses. The island is filled with plantations of spices and many guided tours are organized for a peek into the history of the major export product.

Eight spices such as cinnamon, cardamom, saffron, turmeric, pepper, ginger, nutmeg, and paprika are grown here exorbitantly. One can buy these spices from any of the local souks or shops such as the memories of Zanzibar. Some handmade products made from the local communities are up for sale all across the town.

The beach festival is organized every year in the South-east region of Zanzibar on the shores of Jambiani. Anybody can visit and participate in the event for 3 whole days with no admission charges. The beach life, culture, and music are celebrated here jovially around the end of November making it the best time to plan a trip to Tanzania. Thousands of beach bums from around the world frolic around these shores every year.

One can expect events such as kite surfing, kayaking, boat races, snorkeling, beach football, rugby, and volleyball. Competitions such as bartending, food and yoga are also held and the celebrations do not die down even in the night. Many beach resorts such as the famous Kendwa Rocks organize night parties where one can party hard all through the night. Dance shows of African origin, acrobats and African music are organized in the evenings.

The culture and lifestyle of the local tribes of Tanzania are equally fascinating as the country itself. One of the best things to do in Tanzania is to visit the famous Village Museum in Dar es Salaam. It is an open air museum that showcases the lifestyle of over 120 tribes of Tanzania. The museum is situated around 10 kms away from the city center in a place called Makumbusho. It features 16 houses from different ethnic groups that can be entered where one can view the creative skills of these individuals hard at work at making pottery, weaving, carving or painting. Food is prepared and served to the visitors in a traditional way. A music and dance performance takes place every day in the afternoon which is an icing on the top. A shop is set up in a hut where one can buy souvenirs to take home from this culturally rich country.

The experiences that one can have in this ethereal land is incredible. No matter the rains or humidity, Tanzania weather in November does not hinder the excitement of spotting the wildlife. For a hassle-free vacation, book with Travel Triangle now! Do not forget to write to us below of your experience.

A. July to October is the best time to visit Tanzania. The weather is dry and best for wildlife experiences in the country.

Q. What is the weather like in Tanzania in November?

A. November month sees short rainy days in Tanzania. The temperatures range between 24°C (75°F) to 28°C (82°F). November and December witness less rains but mark the beginning of the rainy season in the country. It also brings the phase the year.

Q. What should I pack for Tanzania in November?

A. Some of the things that you must pack for Tanzania in November are:
1. Light clothes that can dry easily
2. Waterproof bag
3. Umbrella or raincoat
4. Sport shorts or non-slippery flip flops, sandals
5. Sanitizer
6. Sunscreen

Q. What is the best time for mountain trekking?

A. Mountain trekking season in Tanzania is between July and October which is considered as a dry season. November brings short rains which can make the path up the mountain a bit slippery.

Q. Are there any shopping options in Tanzania?

A. There are many curio shops and local markets that sell the African products as souvenirs. If one is looking for brand shopping then Dar es Salaam is the place to head to.

Q. How many days does one need for a safari tour?

A. Safari across the large conservation areas in Tanzania requires a minimum of 3 days. There are 5 and 7-day safari tour options available.

Tadoba Andhari National Park: A Detailed Guide To The Home Of The Royal Bengal Tigers

15 Wildlife Sanctuaries In Gujarat For Spending A Day With Nature In 2020!

Orang National Park 2020: Your Absolute Guide To The Mini Kaziranga Of Assam!

Bandhavgarh National Park: A Wildlife Retreat In The Lap Of Nature In 2020!