9 Holy Temples In Ernakulam You Can Visit For A Spiritual Detox! 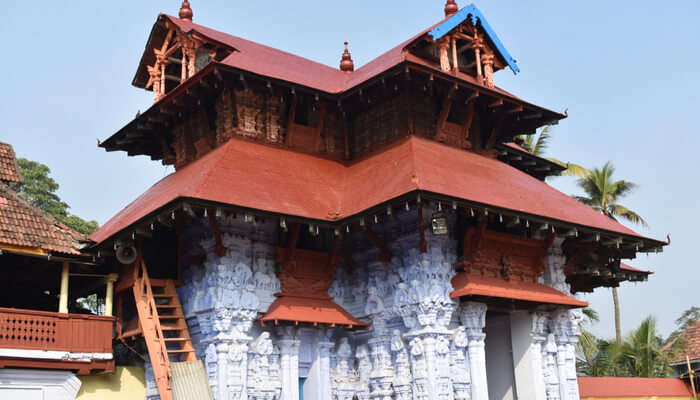 Also called Kochi or Cochin, Ernakulam is located in the south-western part of India. It is a mixture of modern and old tourist attractions with one leg in the past and the other in the future. In India, there is nowhere else to share with a 400-year-old synagogue, old mosques, Portuguese homes, and the crumbling places in the company Raj. There are no other places in India than these. In contrast, the Keralan art shows draw the most visitors to Ernakulam. Ernakulam is the most economically prosperous town of Kerala because of its the Arabian Sea on one side and the affluent cities such as Thrissur, Alappuzha, and Kottayam on the other.

Ernakulam is one of the most popular tourist resorts in Kerala owing to the beautiful surroundings and easy access to other parts of the country. This site is no doubt known as the Kerala Commercial Capital, all because it is home to the most international and national tourists and is Kerala’s leading center of business, with the highest revenue record in the State. Ernakulam, previously known as Kochi, has always been spoken to the region from the start about its growth initiatives. In 1958 it built-in Thrisur and Kottayam by the Principal States of Travancore, Cochin, and British Malabar and became the most significant natural harbor and a trade hub on the west coast. The word ‘Ernakulam’ comes from the name of a prominent Lord Shiva Temple which has a long history, named the’ Temple Ernakulathappan.

Cochin has a different atmosphere in different seasons and, although you can enjoy all year long, here’s the monthly disintegration for the environment in the city: October-February. The temperature varies from 17 ° C to 33 ° Celsius. For lunches, beach bums, and adventure-seekers, this is an excellent time of year. Winter is the best time to visit Cochin from October to February, with great pleasure. The temperature varies from 17 ° C to 33 ° Celsius. With leisure time, sandstorms, and explorers, this is a beautiful time of year.

March to June: the summer in Cochin starts in March, with a rise in temperatures. During this time of year, the average temperature varies from 20 degrees to 37 degrees. It is a great time to visit Cochin because the city isn’t crowded and high hotel fares are available. Make sure you wear shoes or sunscreen with soft cotton.

Kerala is called “The Land of Gods” by a warrior god Parasurama. This most southern State is a land with myths, with tales and some of the oldest temples which function as proof for truth. It is what we consider “The Land of the gods.” Together with Lord Shiva and Vishnu, Kerala is an incredible holy tourist destination, consisting of a large number of temples from the age of 2000 that primarily dedicated to the revered king of Lord Ayyappa. If you are looking for an Indian tour that can fill you with spiritualism and a sense of Godhead, then Kerala is the right place to go. Here below are nine famous temples in Ernakulam:

Image Source
Built-in 1542 AD in dedication to Lord Shiva, is this Ernakulam Shiva temple in Kochi. The most important thing to note in this temple is that of the Dravidian crafts on the walls of the whole building, which is one of the most visited sacred Hindu temples in Kochi. Ettumanoor Shiva Temple is a must-visit among the many temples in Kochi!

Must Read: 10 Charming Homestays In Ernakulam To Feel At Home Even While Being Away!

The Chottanikkara Devi Temple is one of these holy places among the famous Hindu temples in Kochi, where you can see many tourists every day and throughout the day. The beauty of this temple is the adoration of Chottanikkara Devi in three different ways. The deity celebrates in the morning as Saraswathi, the noon as Lakshmi and the night as Durga Avatar. It is the best time to visit this Temple amongst the crowd that the Makom Thozhal festival observes during the month of Kumbham.

Image Source
It is one of the best temples in the city of Kochi, near the hills near Vembanad Lake, where you can relax with your friends and family. The Kaduthuruthy Thali Sree Mahadeva Temple is an ideal place for those who are not only Shiv but also for those in search of silence and isolation from natural surroundings, offering peaceful surroundings and being a natural calm place.

Suggested Read: 5 Outstanding Parks In Ernakulam For Respite From The Busy Life Schedules!

Image Source
It is one of the best temples near Kochi, situated about 6 kilometers away from the city center. The lovely temple is in Tripunithura, a small town in the vicinity of Kochi, which is a popular tourist area. This one built in ancient times as well as other temples in Kochi. Since its inception, the Temple was not rebuilt or refurbished so that travelers could admire the original artwork and layouts of the old buildings.

Timings:Open all day of the week Morning 4am, Evening- 8:30pm

Suggested Read: Top 10 Places To Visit In Kerala During Monsoon For A Mesmerising Trip In 2019

Image Source
The Jain temples in Kochi are among the many unique temples in Kerala, which attract the attention of travelers in a significant way. Jain Temple is one of Kochi’s most peaceful temples and is considered 112 years old. Officers can help you to know how important this place is historical. Although the Temple is open to tourists of all communities, in comparison with the other temples at Kochi, a vast crowd or congestion can not find inside the premises.

Image Source
Legenden tells you that when you worship Shiva in this temple, your wishes fulfill being one of the most visited Shiva temples in Kochi. In the cases of Ettumanoor Siva Temple and Kaduthuruty Thaliyil Temple, the same assume other than the Temple of Vaikom Mahadeva. The “Powerful Trisome” named unique to those three temples. During the festive occasion of Lord Shiva, several festivals conduct, and the more you frequent this spot, the more you are blessed. The celebration of “Vaikathashtami” is also one of Vaikom Mahadeva’s most well-known festivals.

Image Source
The Shree Krishna Temple, located in Guruvayoor, Kochi, is the first and most attractive temple in the city and on our list. The temple is about the Krishna God and is considered the first Hindu temple for all the caste Hindus. This temple is for the Hindus

Suggested Read: Top 7 Soothing Spas In Kerala Where You Can Experience A Rejuvenating Vacation!

Image Source
Located 10 km to the northwest of Cochin, this temple is the best venue for ten long days of Onam celebration. This Temple is known as the capital of a good Asur. This Temple worships and reveals Lord Vishnu of Vamana’s glorious incarnations.

Suggested Read: Monsoon In Kerala: Explore The Coastal Gem Like Never Before!

Image Source
The temple is located 50 kilometers north-east of Cochin. It made by carving a rock that was the best fact about this Temple. More than a hundred steps created by the workers to cut this Temple. Durga Goddess is this Temple’s chief deity. Also, on this religious site, Lord Shiva and Lord Vishnu are adorated.

Suggested Read: 23 Best Places To Visit In Kerala For An Enchanting Holiday In The Year 2019

Tips To Keep In Mind

So, if you’re headed to Ernakulam already, make sure to stop by at some of these above temples for an enchanting experience. Needless to say, a visit to these places will only make your holiday in Kerala with TravelTriangle more serene and memorable.

Q. What is the weather condition in Ernakulam during season months?

A. The best month to visit Ernakulam is between October to February. At this time of the year, it is not very much humid and hot.

Q. How many days are enough to explore Kochi?

A. If you are planning to visit Ernakulam, we think 2-3 days is sufficient to travel around the city.

Q. How many temples are there in Ernakulam?

A. There is no fixed amount of numbers in Ernakulam. As it is famous for temples, you can find many, or you can visit the famous ones.

Q. Which the famous Temple of Ernakulam?

A. There are many temples in Ernakulam. Few temples which are worth to visit in Ernakulam are Ettumanoor Shiva Temple and Chottanikkara Bhagavathy Temple.

Why You Should Visit Kerala In Spring? Here Are The Beautiful Reasons That’ll Get You Going!

31 Places To Visit In Mahabaleshwar For A Refreshing Maharashtra Trip In 2020!