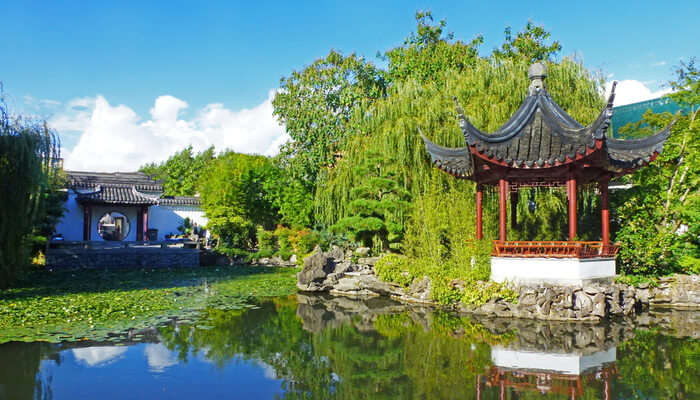 The city of Vancouver is one of the highly populated destinations in Canada has bagged the attention of many filmmakers due to its scenic mountains and adventurous locations. The city boasts of a wide range of attractions including Stanley Park, Granville Island, and Gastown. But the aspect that makes it more exciting is the alluring temples in Vancouver. These temples make sure that despite being far away from their homes, tourists are never distanced from the Almighty.

The Vancouver temples open doors to people from all backgrounds and enable them to witness some formidable examples of art and architecture. Visiting these places, tourists can cleanse their souls and collect some much-needed blessings for their future endeavors. Nothing can be better than taking some time out of your vacation for God and engaging yourself in some peaceful meditation activities.

Vancouver is truly a treasury of temples offering several reasons to the tourists to remember their deities. Take a look at the various temples you can visit on your next vacation in Canada.

The Sri Ganesha Temple is truly a heavenly meeting place for the devotees of Lord Ganesha in Vancouver. Each day, the temple serves as a center for the devotees to worship their Lord and take part in prayers and religious activities. The temple also hosts certain Hindu festivals and is quite a happening place during the festive season. A free prayer hall facility at the temple enables the devotees to worship their deity. If you ever pass by Fraser Street, do pay a visit to this astounding temple in Vancouver. A true devotee of Ganesha should never miss on visiting Vancouver temples like the Sri Ganesha Temple.

Must Read: 10 Best Things To Do In Vancouver For All-round Fun

The history of one of the most iconic Buddhist temples in Vancouver Canada ranges back from the world war era when the Japanese immigrants in Vancouver were ordered to evacuate the West coast which resulted in the temple being shut down. But it was only till 1949 when the order was lifted and the Japanese were allowed to return from the west coast. Subsequently, the temple opened its doors in 1954 and still stands tall as a significant rendition of the Buddhist culture and history. Each year, the temple organizes the Powell Street Festival which features some art displays, music performances, martial arts, and theatre performances.

Suggested Read: 10 Best Places To Visit In Vancouver That Are Filled With Love, And Life!

The International Buddhist Temple is an imperial epitome of Chinese art and architecture boasting a beautiful Chinese garden comprising of lotus ponds, rock landscapes, twin gazebos, and a rock bridge. The building also features a flowing Wisdom Fountain which is known to have cleansing properties. The Main Gracious Hall at the center of the temple which houses the statue of Buddha Sakyamuni which is the largest Buddha statue you can find in the whole of North America. Not just this, the temple hosts a Chinese art exhibition every month witnessing participation from numerous renowned artists in Vancouver. You can also take part in meditation classes at the temple every Saturday.

The ISKCON Temple in Vancouver is a wonder in itself. There is so much you get to witness, ranging from colorful festivals to cultural classes, if you pay a visit to this beautiful temple. Every Sunday, the temple hosts feasts which can be attended by anyone irrespective of caste, religion, and nationality. In addition to this, the temple is also a center for some prominent Hindu festival celebrations including Shiv Ratri, Govardhan Puja, and Jagannath Rath-Yatra. You can also be a part of evening classes and satsangs organized at the temple to educate yourself about the ideal way of living life.

One of the highly visited Hindu temples in Vancouver, the Mahalakshmi Hindu Temple is a divine place for devotees to engage in prayers and meditations. Every month, the temple hosts special prayers ranging from Lord Hanuman Puja, Mahalakshmi Mantra Jap, and Vinayaka Chaturthi Jap making tourists feel close to the almighty. The best time to visit this temple is from February to March since during this period you can indulge in annual Holi events at the temple and can also be a part of Sri Purandara Daasa Aaradhana which is a musical event witnessing participation from some talented religious musicians.

One of the oldest Sikh societies in Vancouver, Khalsa Diwan Sikh Society based at a gurudwara which is known to be one of the largest Sikh temples in Vancouver. The Gurudwara marks the legacy of Bhai Mewa Singh who fought against racism and discrimination that Sikhs were subjected to during the 20th century in Canada. Each year, the Gurudwara hosts events in the memory of Bhai Mewa Singh which witness participation from thousands of Sikh immigrants in Vancouver. The temple is one of the most happening places in Vancouver during Vaisakhi which is celebrated by people belonging to different religions, castes, and nationalities.

If you wish to be a part of some colorful Chinese festivals then you should not miss out on visiting the Ling Yen Mountain Temple. The temple being one of the most happening Vancouver temples, hosts numerous events for the tourists comprising of photography contests, art exhibitions, dinner programs, and educational programs. Apart from these, you can also be a part of Buddhist practice workshops offering lessons about Buddhist etiquette, Chinese art and craft, and Buddhist history. There’s so much to experience at this alluring temple just a few kilometers from Vancouver.

Further Read: 10 Must Visit Churches In Canada You Shouldn’t Miss Out

With so many places for devotion in its reserve, Vancouver is surely a place tourists should visit during their vacation in Canada. The presence of such beautiful places to worship signifies that wherever you go, you can never be away from God. Featuring some jaw-dropping architecture and events, the temples in Vancouver tend to be some of the must-visit places in Canada. Plan your Canada trip with TravelTriangle now!

8 Places To Visit In Lambasingi In 2021 That Hold The Essence Of The Village!

5 Amazing Places To Visit Near Gandikota That No Traveler Would Want To Miss In 2021!

Palawan Island: A Handy Guide For A Visit To The Most Exotic Place On Earth!