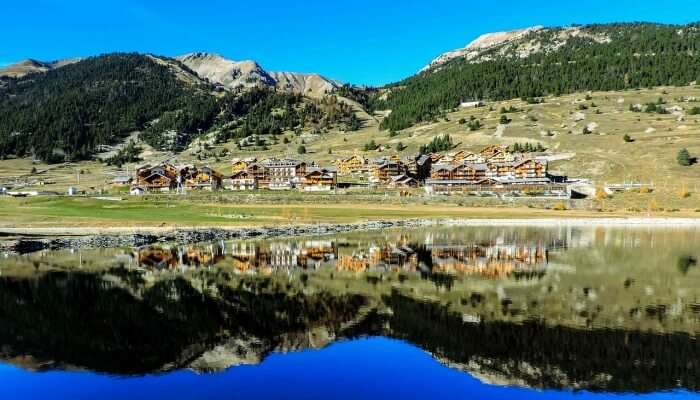 Europe during winter in true self is an imitation of a frozen fairyland. The innate beauty, epic history, stunning artistry, and the diversified culinary is sure to leave you spellbound. There is just no way that you can tour Europe in February and not be mesmerized with the unmanageable wealth of attractions, splendid architecture, and the dazzling pure white snow. With every few hours, you travel in Europe you will find yourself immersed in a new culture, language, and food customs along with the warm sun of winters and the colourful festive lights.

Weather In Europe In February

Why Should You Visit Europe In February

There are several reasons to visit the continent of Europe in the month of February. Some of the most prominent reasons have been listed below!

Europe gets festive in February with several festivals and carnivals creating an electric ambiance that every traveller would long for. Some of the popular events and festivals in February that you should checkout are listed below –

2. Europe Is Cheaper In February

Winters are generally the off-season in Europe considering the cold weather. February is one of the best months to plan a trip to Europe if you want to avoid peak season inflations and a relatively moderate climate. Wherever you travel in Europe during February, there will be–

5 Things To Do In Europe In February

February is one of the best months to visit Europe if you want to experience the local essence. Listed below are some of the best things to do in Europe during February and enjoy the festivities of the most incredible European cities.

The Venice Carnival is an Italian tradition that has been happening for over 700 years to celebrate the spirit of Venice. The beautiful canals of Venice are hived with Gondolas with the locals’ wearing colourful masks and costumes, making it a mesmerising and magical moment.

Every year the lovely Spanish city, Sitges hosts a tantalizing carnival, which consists of numerous performances and parades like The Extermination Parade, The Debauchery Parade, and The Burial of the Sardine. The friendly locals welcome visitors to be a part of all the fun and excitement.

3. Menton– for the Fete du Citron

The beautiful and sunny town on the French Riviera- Menton organises a yearly lemon festival, which is celebrated for three weeks to give a tribute to the lemon fruit. The fete is a mix of carnivals, parade, and performances all praising and celebrating lemon.

The musical city of Copenhagen celebrates its love for jazz at the annual Vinterjazz festival held in February every year. The festival is home to numerous Danish musicians and international artists who perform different jazz styles at various venues around Copenhagen and other cities of Denmark.

Suggested Read: Go Paragliding In Switzerland For The Most Amazing Swiss Alps Experience In 2021

Tenerife is one of the most beautiful cities to visit in Europe in February. It is famous for its blue seas and white sandy beaches. The city becomes alive during February with celebrations consisting of live performances, parades, and exciting parties.

Our list of things to do in Europe is a mixed bag of events and festivals that covers the most vibrant and colourful cities of Europe to satisfy the February wanderlust in you. All you need to do is to keep your passports ready and book an extravagant trip to Europe with TravelTriangle and have an astounding vacation with friends and family.

Frequently Asked Questions About Things To Do In Europe In February

What is the temperature of Europe during February?

The average temperature of Europe during February ranges from 5° Celsius to 3° Celsius. February is a great time to visit Europe as the weather starts getting warmer and the crowd is less.

Which places should I visit in Europe during February?

Is February an ideal time to visit Europe?

February is the best time to visit Europe if you are travelling for a budget holiday and hate long queues and a large crowd. February is a great option to visit Italy, Spain, France, and Croatia.

What are some of the must-visit events in Europe during February?

Some of the must-visit events are the Berlin Film Festival, Battle of Oranges, Cologne Carnival, and many more.

Which is the warmest place in Europe in February?

Warmest place during February in Europe is Greece, Italy, France, Spain, and Portugal.

What to wear when travelling to Europe in February?

What are the cheapest European countries to visit?

Some economical countries in Europe are Romania, Portugal, Croatia, Hungary, Ukraine, and a few more.