14 Things To Do In Hue Which Make This Town In Vietnam Worth A Visit In 2021! 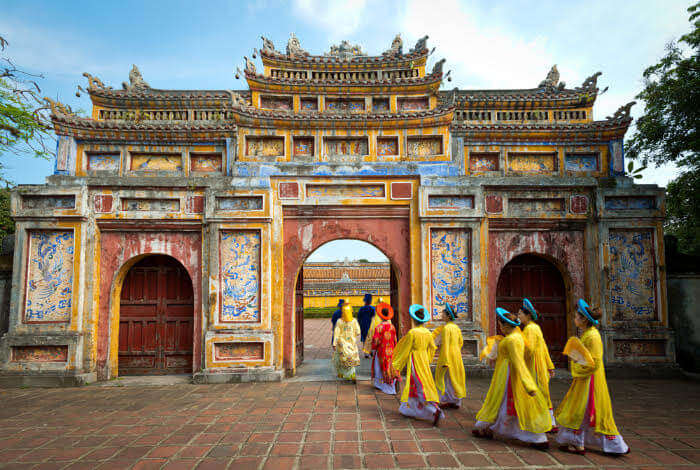 Hue (pronounced “Hwhey”) is one of the most ancient cities in the province. It is one of the most explored tourist destinations in comparison to other province. It was once the seat of the Nguyen Dynasty and known for its palace and shrines. The city glorifies the imperialism in Vietnam which you can see in its citadels and architecture. There are several off-the-radar things to do in Hue which will definitely catch your interest. Make sure to go through all of them before going on a trip to Vietnam.

There are plenty of tourist attractions to visit in Hue. If you are wondering what to do in Hue city Vietnam, we have listed some of the best things you could do there in the company of your family and friends:

One of the things to do in Hue is to visit Thien Mu Pagoda which is situated on the northern side of the Huong River, just 3 km from the Citadel. Thien Mu Pagoda is considered as one of the spiritual hubs in Vietnam. Tourists can easily reach here either by a bicycle or through a dragon boat by crossing the river Huong River.

This building attains its existence way back in the year 1844; it is characterized by a few golden Buddha portraits. These portraits are situated at the base accompanied with a large bell and a turtle made from stone with an inscription of the 17th century. This holy place is an adobe for many monks and also attracts a number of tourists.

If you’re wondering what to do in Hue at night, this is it. Shopping in Hue is one of the most comforting things if you are wondering what to do in Hue. If you wish to rediscover Hue, it is highly recommended that you go to Dong Ba Market. This market is flooded by plenty of traditional products and other items. It becomes difficult for every tourist to come out from the market easily as they get easily entangle amidst the plenty of items available.

Ho Quyen is one of the most interesting places to visit in Hue. Trekking up the Ho Quyen, is also known as the Tiger Fighter Arena, is one of the fun things to do in Hue. It is where a fight between tiger and elephant was conducted on annual basis. Essentially it was considered a place to facilitate and entertain the Emperor’s family and his other nobles. The sadder part of this place is that it is now being overlooked by the tourist at a large scale. This place consists of 2 round thick walls, round an earthen embankment, the stairs on one side leading to the highest point for the Emperor and his family and the other side for the court and the public. It is one of the best things to do in Hue.

Image Source
Brass work is one of the lesser known facts of Hue City and admiring the art is one of the unusual things to do. But this is something which every tourist must try. While coming from Tu Duc Tomb, visitors can take a stop at this Brass Works. It is a heaven for the people interested in buying brass items. Basic techniques and tools have been used for creating these mesmerizing brass items.

Suggested Read: Top Restaurants In Hue For An Authentic Culinary Affair While Backpacking In Vietnam

Discovering the city on a bicycle is one of the fun things to don Hue. Bicycle tour makes the entire visit more adventurous. Hue is also one of the best cities in Vietnam for cycling. The main reason behind cycling is that the traffic here is very less and the local people are not in a hurry thus making it convenient for tourists to visit the entire city by bicycle. The cycle ride begins from the banks of Huong River over the Truong Tien Bridge to the Citadel surpassing a series of aircraft displaying the American War.

The ride surpasses the local shops of hairdresser, clothes shop, coffee shops etc. another idea is to join the cycling tour where the tour begins from Da Nang alongside the coastal road and climbing up to Hai Van pass. If you have 1 day in Hue, this is what you should be doing. This is one of the most unusual things to do in Hue.

Suggested Read: 7 Festivals In Vietnam That Are All About Glitz, Glam, And Grandeur This 2021!

Fishing is one of the most beautiful things to do in Hue and cherish the experience like locals. It is so much common that you can witness it everywhere in the city ranging from ponds to royal palace. However, the tradition of Hue says that the best way of fishing is to visit the authentic fishing restaurants. In these restaurants you can come with your group and catch different kind of fishes and releasing them simultaneously. At the same time you can also relish certain kind of drinks like beer, coffee, ice cream etc.

One of the top things to do in Hue is to attend the vibrant Hue festival. It is one of the biggest cultural events of the city held in every two years. There is a week for each of the festive seasons which is a way of signifying honor to cultural values. The first Hue festival took place in the year 2010. The festival is marked by a grand opening powered by colorful dance performances by different art groups hailing from Vietnam and some other countries. It is a platform for a lot of people to exchange cultural grits. Several events like Hue Poetry Festival, Art Exhibitions, Traditional Kite Flying, Boat Race, Human Chess or watching shows like Ao Dai, Grand Show, and Oriental Night Show etc.

The New Space Art Foundation [NSAF] is an independent art space in Hue city, which was founded by the twins Le Duc Hai and Le Ngoc Thanh who have had more than ten year experience in coordinating multiple and different visual art activities at their New Space Arts gallery. It aims to increase contemporary art appreciation among the general public.

Posh Boutiques is the largest social commerce marketplace for fashion where anyone can buy, sell and share their personal style. With over two million seller stylists and millions of shoppers, Posh Boutiques brings together a vibrant community everyday to express themselves and share their love of fashion. If indulging in retail therapy is not one of the best things to do in Hue, then what is?

10. The Emperor’s Tomb – Trace The History

The Emperor’s Tomb is emblematic of the history of the Nguyen Dynasty which reigned over the city for the longest time. You shouldn’t avoid going to this place at any cost. It is said that Tu Duc, designed his own tomb, with a lake and a small island within it. However, the Emperor decided to be buried at some other place in a secret location which has never been revealed. This tomb was actually built before the death of Emperor.

Suggested Read: Shopping In Can Tho: 7 Ultimate Places For Bringing Home The Best Vietnamese Finds!

This is one of the few things to do in Hue that you shouldn’t ignore. Thanh Toan Bridge is one of the prime attractions of Hue. It was constructed in the 18th century. The bridge has been influenced by both Japanese and Chinese architecture. The primary function of the bridge is to unite two quiet villages of Hue. Most tourists, however, usually visit the bridge to take a few pictures.

Suggested Read: 7 Villas In Ho Chi Minh City For Taking Refuge In This Paradise In Vietnam!

Taking a splash in Elephant Springs is one of the best things to do in Hue. It is a recreational activity enjoyed by all. Your trip to Hue, Vietnam is incomplete if you did not visit Elephant Springs. It is located merely 17 kms away from Hai Van Pass. Take a break from shopping for souvenirs and head here for some downtime with friends and family. The stone in the center of the springs resembles a large elephant.

Phuong is one of the few nightclubs in Hue that has withstood the test of time. What makes it stand out from the rest of the clubs in Saigon and Hanoi is its architecture. It is built in the form of a theatre. It is divided into two floors and there is a stage up front where locals and tourists shake a leg with the cabaret dancers. The music ranges from live Vietnamese pop to loud Vina House.

Further Read: 6 Temples In Vietnam That Are An Epitome Of Art, Architecture, And Excellence!

Next time you plan a vacation to Vietnam, make sure you visit this historical province that will introduce you with the true colors and culture of Vietnam. It is indeed a must-visit place on your South-East Asian trip. Also, engage in the aforementioned things to do in Hue for a thorough tour of the quaint city.