All You Need To Know About Vivid Sydney 2021 – World’s Largest Festival Of Light, Music & Ideas 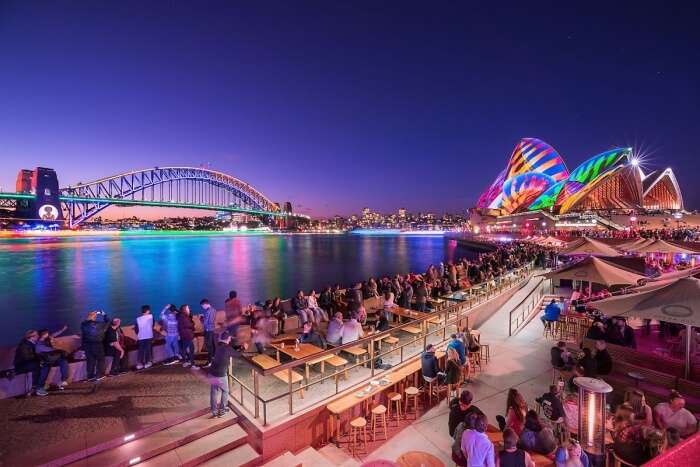 Vivid Sydney 2021 is going to mark ten years of the festival. It started off in 2009 as a Smart Light Festival. Mary-Anne Kyriakou, Brian Eno and Bruce Ramus were among the masterminds who made this happen, by projecting light painting on Opera House, one of the top tourist attractions of Sydney.

Like every year, Vivid Sydney 2021 too will be about an interesting lineup of local and international artists, exhibitions, photo ops, event and what not! Some of the top highlights of Vivid Sydney are:

Places to visit during Vivid Sydney 2021

This one indeed has to be at the top! Like every year Opera House is going to be the star of Sydney Vivid Light Festival 2021, with Metamathematical. Australian designer Jonathan Zawada has created geometric patterns and sculptures which will keep changing in a motion inspired by Australian flora. The three-dimensional sculptures are designed to look as if they’re inside the sails.

Taronga Zoo already is a place that interests both kids and adults alike, and during Vivid Sydney 2021 the craze is only going to be on the rise. As you take the trail you will come across giant animal sculpture illuminated in different hues. Asian elephant, Sumatran tiger and bilbies are among the 10 creatures featured. Taronga is committed to protecting all these ten animals, specifically.

Vivid Sydney 2021 at the Museum of Contemporary will be made more stunning with installation, Virtual Vibration. This will showcase a blend of psychedelia and modernism. The names behind its creation are Spinifex Group, Mark Pritchard and Jonny Niesche.

That’s all you needed to know about Vivid Sydney 2021! You’re now all set for the festival. But wait, before you book your Australia tour package, catch another glimpse of all the jazz that awaits!

19 Festivals Of Delhi To Attend In 2021 For A Food, Shopping & Cultural Extravaganza!