Waterfalls In Austria: For A Tour Through The Most Extravagant Sceneries Of This Land! 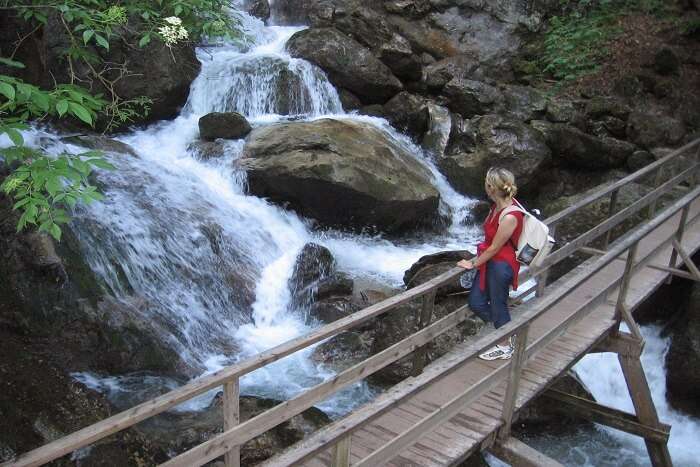 Austria is situated in the central region of Europe. Known for its extraordinary visual aspect and high terrain, the tranquil high mountains of Austria are just unimaginable. 32% of Austria is below the altitude of 500 m which is around 1640 ft. Due to the presence of such high mountain ranges, there are many spectacular waterfalls in Austria. People travel in flocks to visit Austria to witness these magical waterfalls and they definitely are worth a visit. Here we have listed top 10 waterfalls that you ought to visit when traveling to Austria for a holiday. Have a look!

While the winters are a big no, visiting the waterfalls is great during March to June and then August to October. One needs to avoid the Monsoons, has the water flow could be heavy and be dangerous for visitors. So heading in the Summers and Falls would be perfect.

In Europe, there are many waterfalls, and in the list of these waterfalls, Krimml Waterfalls is the 3rd highest waterfall. It has a drop height of 380 m. It is considered to be one of the most impressive and spectacular waterfalls in the whole world. Krimml also falls is also the 5th highest waterfall in the whole world. A very impressive location is at the end of the valley of the Krimml falls. Krimml waterfall is originated from the Krimmler Ache, and so it is also known by the name of Krimmler Waterfalls. The starting of the falls takes place from Krimmler Achental and then it is flowing gently for about 20 km in the flat alpine pastures before it reaches the exit of the valley. The exit of the falls is like a roaring lion in the form of glacier stream, and finally, it flows down as the Krimml waterfalls.

Must Read: 10 Austrian Restaurants One Must Visit To Relish The Taste Of Authentic Austrian Delicacies!

Golling Waterfall is 75 m in depth. It is situated near the Gothic pilgrimage church of St. Nicholas. It is set between a lot of pine trees. This waterfall is a very popular one, and it is considered to be a very romantic place for couples. Couples prefer to visit this place to spend some quality time. Golling Waterfalls is in the list of most romantic natural places in the whole country. This waterfall is 3 km from the center of the village. The timings when Golling Waterfalls is open are from May to October. It is open daily from 9 am to 6 pm from May to October. There is a forest path which leads directly towards the waterfall. The path by the forest is very adventurous, and most of the people prefer to go by this route to be connected with nature. There are steps also which leads directly to the source of the waterfall.

Grawa Waterfall is in the rear of Stubaital which is to the right side of the valley opposite to Grawa Alm. This waterfall is the widest of all in the whole eastern Alps of about 85 m and Grawa Waterfall falls from a height of 180 m.
Grawa Waterfall is formed by Salzaubach. It is filled with very strong glaciers coming from Ruetz and these glaciers are known as Sulzenauferner later on. Due to such extreme climatic conditions, usually no insects or any aquatic animals are not found.

Suggested Read: 10 Rivers In Austria That Will Bowl You Over With Their Beauty

Stuibenfall is situated in Otztal Valley and this waterfall shows the power of nature. Stuibenfall is the tallest waterfall of Tirol and there are various viewpoints to take a look at the waterfall. There is a ferrata fixed route of rope climbing which would take a person next to the flow of water. Stuibenfall has a height of 159 m.
This Waterfall is surrounded by forests around it. The forest consists of pine trees and spruce. There are even some bushes like berry and bushes which are usually found only in tropical regions.

Myra Falls are situated in the Lower part of Austria in Muggendorf. Myra Falls is not very long enough. It is also known as a spring steeped legend. The ravine is actually 600 meters long along with the falls and it is 70 meters in height.
This Waterfall is surrounded by lush greenery and has a rocky terrain around. One can find berry trees in this tropical region. As it has quite a few rocks surrounding it, visitors should be careful to avoid slipping.

This waterfall is divided into five stages and it has a height of approximately 520 m. It is located on Walcher Bach Creek and it flows from an altitude of 2300 m from Walcher. The starting of this fall takes place from Ferleiten (1151 m). Most people visit this waterfall between the seasons, June to August, as the flow is maximum is during that time and it is a delight to watch.

This waterfall is situated in Obersulzbachtal near Salzau in Tirol region of Austria. The height of Seebachfall is about 480 m. The journey of Seebachfall will take about 1.5 hours and a person would reach to the altitude of 1400 m to Berndlalm. This waterfall is popularly visited by tourists and is considered one of the best waterfalls in Austria.

The Wildensteiner Waterfall is in Carinthia. It is in the list of highest waterfalls which are free-falling in Europe. The formation of this waterfall is because of Wildensteiner Bach which later on flows into Drau.
This waterfall is situated near Gallizien village below Hochobir. There is a parking lot and from there a person could reach to the waterfall in 20 minutes. The road to the waterfall is like a steep forest road. There is a fence so that people do not go very closer as there is danger because of rockfall. It is considered on one of the most riskiest waterfalls in Austria, hence one should take ample precautions before visiting this place.

Located in Palfau region of Austria, the Wasserlochklamm Palfau falls is among the most serene and enthralling waterfalls one can experience. The crystal clear water flowing from a high mountain deep into the Salaza river is marvellous to watch. This destination is popular among tourists for hiking, and for camping at the foothills. So if you are looking at spending sometime gazing at the stars, above the waterfall, then this place is a must visit.

Located in the centre of the enormous Hohe Tauern National Park, the Groppenstein Waterfall is 30 metres high, heavilu surrounded with all kinds of bushes. The location of this waterfall has made it one of the most popular ones and is hub for tourists. This waterfall in known for its the bridges and walking paths around it, giving all tourists an opportunity to experience this waterfall closely.

Waterfalls are a natural beauty and should be on everyone bucket list to visit. And if a vacation to Austria is on charts, then visiting these waterfalls will be a lifetime experience. So why wait? Plan a trip to Austria for a serene experience amid these natural landscapes with your loved ones!