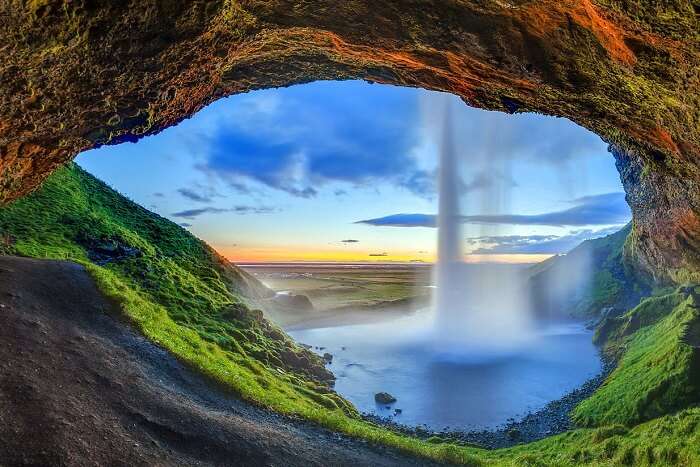 Iceland is known for its awe-inspiring natural beauty, be it mountains, glaciers, rivers, cliffs, lava rocks or even waterfalls. Nobody knows the exact number of the abundant waterfalls in Iceland, you can’t ever imagine visiting all of them. If you just drive on route 1, you’ll find dozens of them coming one after another.

While there are numerous waterfalls in Iceland, many of them can be accessed by roads, while some require hiking and physical work to see the spectacular sights.

Gullfoss or popularly known as the Golden falls is located on the Glacier river of Hvita which flows from the Hvitarvatn Glacier lake of the Langjokull Glacier. A popular tourist destination in Iceland, this is one of the most popular waterfalls in Iceland. It is located on the famous Golden Circle route of Iceland. A 32 meter high Waterfall, the waterfall plunges in two stages first 11-meter plunge than a 21-meter plunge.

Must Read: 10 Breathtaking Beaches In Iceland That Are Beyond Comparison!

Dettifoss or commonly known as the beast, it is not only the most powerful waterfalls in Iceland but also in all of Europe. Each second 193 cubic meter of water rushes past the mouth of the 100 meters wide and 44-meter-tall waterfalls. Stand close enough and you’ll surely feel the earth tremble due to its force. Located in North Iceland on the Jokulsa a fjollum glacial river, this is said to be the largest waterfalls in Iceland.

The Haifoss waterfalls are one of the tallest waterfalls in Iceland, with a height of an impressive 122 meters above the ground, the waterfalls thunder the water down to the ground making some amazing sounds on the way. The waterfalls are located in southern Iceland on the river Fossa close to the Hekla Volcano near the entrance to the Icelandic Highlands.

Suggested Read: Festivals In Iceland: 7 Popular Celebrations On The Land Of Fire And Ice

Godafoss or God’s Waterfalls is just 12 meters in height but has an imposing width of 30 meters making it one of the most powerful waterfalls in the whole of Iceland. Godafoss gets its name from various references in the Icelandic sagas and mythology connecting it to some of the major events such as conversion to Christianity from Paganism in the year 1000.

Suggested Read: The 7 Best Water Parks In Iceland For A Great Weekend Out

Also known as the Black Waterfalls, this waterfall is named after the surrounding black hexagonal cliffs from which it plunges down to the ground. This is a 20-meter free-falling waterfall and looks stunning with its black backgrounds. To reach the Svartifoss in Europe you have to hike for about 45 minutes or 2 km on a popular trail from the Svartifoss Waterfalls Visitor center.

Suggested Read: Iceland In December: 15 Experiences For Having The Best 2020-21 Winter Vacay Ever!

Known to be the second highest waterfalls in Iceland, this 190 meter high waterfalls used to be the highest waterfall in Iceland until recently when experts found out a new one in the Vatnajokull Glaciers named the Morsarfalls having a drop of 228 meters. The waterfalls are located 1 and a half hour drive from Reykjavik in the Vatnsdalur which is a deep fjord that reaches far inland just north of the Capital.

Suggested Read: 18 Magical Reasons To Visit Iceland That You Just Can’t Say No To!

Located in North Iceland, Aldeyjarfoss is a 20-meter high narrow waterfall from which a narrow stream of Ice cold glacier water flows. The stunning view of the waterfall making an amphitheater with the surrounding black basalt rocks gives the catchment area of the waterfall a bowl-like shape. Best view and the easier hike is from the Northern side of the waterfall.

Suggested Read: 10 Things To Do In Iceland In Winter Apart From Making A Snowman

One of the most beautiful waterfalls in Iceland, it is well known as the most photogenic waterfalls in Iceland. This waterfall plunges from a height of 60 meters from an ancient cliff into a shallow pool of water. Located in the Southern coast of Iceland, the waterfalls is just 120 km from Reykjavik or a 2-hour drive from the Capital. Take route 249 from the Ring Road to reach this magical wonder.

Iceland is home to some of the most amazing natural wonders, waterfalls are one of them. Having an abundance of beautiful and powerful waterfalls in Iceland makes this country a fairyland where tourists flock to witness the power as well the beauty of nature all at one place. Icelandic people love their waterfalls and so does the tourists who visit them. Book your ticket to Europe now.

17 Magnificent Waterfalls In Thailand That Showcase The Magic Of Nature