Top 10 Adventurous Things To Do In Melbourne For The Best Vacay In 2021! 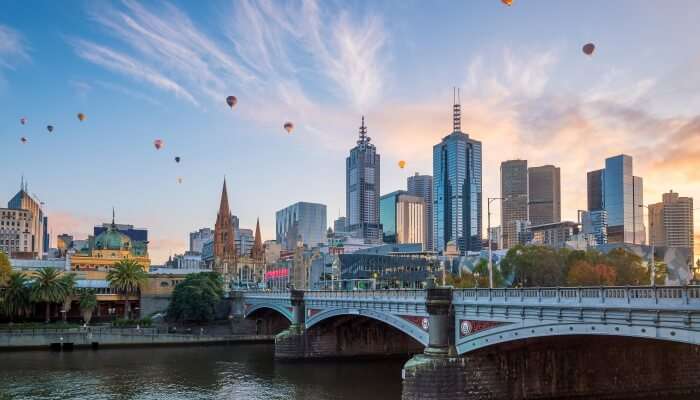 Melbourne has a unique inner neighbourhoods, a stimulating city centre, great mountain ranges and lush green parks where you get to enjoy the nature of Australia at its best. Though the central city has few people as residents, the city is the heart of an extensive metropolitan area that has a population of more than 1,000,000 people. The world’s coffee capital is well known for its cultural diversity, astonishing street art and fine dining options for everyone. It has been voted as the most livable city regularly.

No matter if you are a visitor or have lived your entire life in Melbourne, you will find many adventurous things to do in this city. The food, drink, theatre, art and sports culture are one of the finest in the world. The capital city has lots to offer from pubs to culture and is a one-stop destination for adventure lovers. You can cycle and enjoy the beauty of the bayside or go around the city to shop the best local trendy fashion. Indulge yourself in the following 10 adventurous things to do in Melbourne.

10 Best Adventurous Things To Do In Melbourne

The following are the most adventurous things to do in Melbourne in 2021:

You can tandem skydive over the most stunning city, beach and bush land scenery. You can skydive from the highest altitude [14,000 ft]. Feel the freefall thrill at 200km per hour for a minute and float under the canopy for 7 minutes taking in the fantastic views. Skydive with the help of the best instructors. Get out there and push your limits to enjoy a skydiving experience that you will cherish forever.

Must Read: 7 Cruises From Melbourne To Make You Feel The Luxury Overseas

Puffing Billy journeys through “The Dandenongs” which is situated to the east of Melbourne. This popular steam ride runs daily from the Belgrave foothills to the Gembrook mountain town. The red carriages that rattle through the plains and valleys and under that towering mountain ash shadow runs over three significant timber bridges.

The direction spreads through the Sherbrooke Forest’s eucalyptus, past the Menzies Creek steam museum and the Emerald Lake’s picnic grounds. It takes two hours to take a one-way trip [15 miles]. It is the most favourite train in Australia and is also one of the world’s best-preserved steam railways. This train is old for over a century and is running still on its primary 25 km mountain track through the fern gullies and the astonishing forests of the Dandenong ranges.

Suggested Read: The 15 Best Places To Go Shopping In Melbourne On Your Next Aussie Trip In 2021

Melbourne is one of the few places in the world that can be navigated by hot air balloons. Global Ballooning Australia is a private Victorian business that offers you a luxurious and sensational way to see the best views of the city – the Albert Park Formula 1 racetrack, the Shrine of Remembrance and the MCG. You get a souvenir pack as complimentary that includes exceptional discounts and offers at different attractions in and around Victoria. A hot air balloon flight will let you experience all your senses, especially sight.

Suggested Read: 10 Museums In Melbourne That’ll Walk You From Antiquity To Modernity

You can see the lakes, rivers and the remote places of Victoria that is inaccessible via foot or by road from a kayak or a canoe. You can explore beautiful rapids and waterways. Yarra River allows you to hit the water or even venture further into the Goulburn Valley’s Nagambie Lakes, Lake Wendouree situated in Ballarat and the Barwon River near Geelong.

The Sea kayaking is a pastime that is popular with tourists. You can sign up for a guided white water rafting journey with a company in the locality as well. If you wish to have an adrenaline rush, you should probably head to the Thompson, the Mitta Mitta rivers situated in the High Country in Victoria.

Suggested Read: 15 Restaurants In Melbourne That Are A Hit With The Tourists

This renowned garden is situated in Melbourne’s central part, Victoria, on the Yarra River’s south bank. The landscape consists of a combination of exotic and native vegetation that includes more than 10,000 individual species. It has a second division situated in Cranbourne which is around 45 km southeast to the city.

This garden focuses mainly on the native plants of the nation and has a special section known as the Australian Garden. These gardens are located adjacent to a huge parklands group between the Yarra River and the St. Kilda road called Domain Parklands that include the Alexander Gardens, the Kings Domain, and the Queen Victoria Gardens.

This market is very popular amongst the locals. It is their go-to place to get fresh veggies, fruit, meat and a variety of small goods and dairy. Numerous stalls sell accessories, clothes and other stuff which is why it is flocked by the tourists as well.

Shop, eat, explore and discover your path through the heritage Sheds and the best food halls. You can buy artisan cheeses or take away food. One thing that you shouldn’t miss is the American Doughnut Kitchen’s hot jam doughnuts. The market is open throughout the week except for Mondays and Wednesdays.

It is the oldest zoo in the country that was opened at the Royal Park site over the donated land by the Melbourne city. Prior to this, the animals were accommodated at Melbourne’s botanical gardens. You can see the zoo’s nocturnal animals during the Roar and Snore evenings with the help of keepers.

Most of the animals are organized in climatic regions – Asian rainforest that has the otters and tigers; African rainforest that features mandrills, gorillas, parrots and pygmy hippos; and the Australian rainforest with emus, kangaroos, koalas, rare hairy-nosed wombats and echidnas.

A tram ride might seem obvious, yet most tourists have never taken one. The tram network in Melbourne is an incredible beast. The best part is that an enormous chunk of the tram is free of charge to ride if you stay within the city limits. A commentary will offer you with details of the major attractions and landmarks of the city such as Parliament House, the City Museum, Docklands, Melbourne Aquarium, the Princess Theatre and the Federation Square.

Tourists can spend their time inside a tram, all day. You have leaflets that include a map of Melbourne to help comprehend the city easily. The tram network spreads out from the centre of the city. You should take the Route 96 tram to travel north to south. This tram stretches from St Kilda to Bourke Street. You can get down at stop 16 to try the best croissants in the world at Lune or see fairy penguins present at St Kilda beach at stop 145.

Suggested Read: Melbourne In March: Enjoy Your 2019 Vacation At This Australian Paradise!

They are native to the southwestern part of Oregon in the US and the coastal California. They were planted in the Great Ocean National Park during the 1930s and also in the Warburton Valley. Walkthrough these trees to see how tiny you look in front of them. The plantation situated in Warburton is grid-like and has more than 1400 trees that are 55 metres tall.

Suggested Read: Melbourne Travel Guide: For All That You Must Know Before Heading To This Aussi City

You can indulge yourself in an annual feast of dance, theatre, music, events and visual art from Australia and also from all over the globe. The array of talent never fails to be a festivity of the finest art. Good talent top the festival but you can also find some smaller acts to get your festival quota filled up. A mega winter festival is coming up during 2021 which is awaited by all art-loving folks around the world.

Further Read: 10 Best Water Sports In Melbourne For An Enchanting Water Vacay In This Australian Land!

When you visit Melbourne you will be able to satiate your adventure desires. The capital city of Victoria helps you enjoy the finest dining, food, and live music alongside its amazing landscape as well. The exciting mix of culture, sports, style, art and dining will make you wish you never have to leave the city. Owing to moderate tourist crowds and the best climate, March-May and September-November are the perfect time to visit this city. Pack your bags and plan your trip to Melbourne with TravelTriangle to take pleasure in doing all these adventurous things in Melbourne.

Frequently Asked Questions About Adventurous Things To Do In Melbourne

Is it safe to skydive in Melbourne?

The Skydive Australian Crew have been offering skydiving service for more than 16 years and so you can rest assured that you are in safe hands.

What is the ideal time to go for a hot air balloon ride in Melbourne?

Winter is the best time to experience the best hot air ballooning. The sunrise starts later during the day which is an added bonus.

Which is the best form of transport to travel through Melbourne?

It is easier to make use of trams compared to other transport forms for people who hop between paying a quick visit to the inner suburbs and the CBD attractions.

What is the best thing about Melbourne Zoo?

You can observe historical cages that include the Elephant House that was renovated for customers who wish to pay to sleep for a night in tents during Roar and Snore evenings.

How tall are the trees in the redwood plantations?

The redwood trees are characterized by their horizontal branches and extreme height – 115 metres tall.