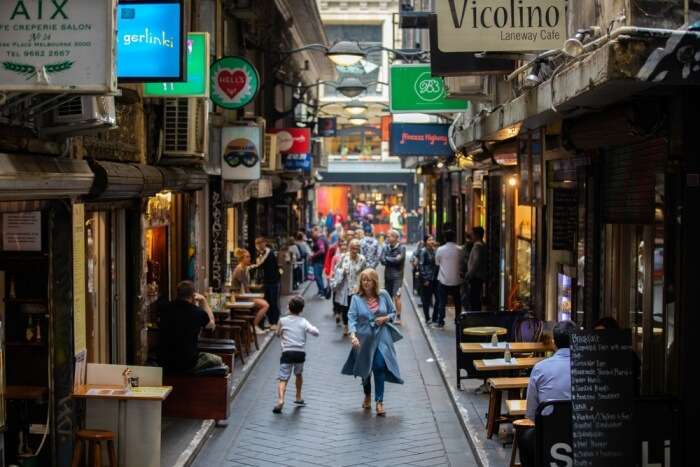 Melbourne is the undisputed fashion capital of Australia and one of the important fashion centers of the world. You can’t possibly belong to the city if you don’t have the knowledge of the latest styles and places to go shopping in Melbourne. Melbourne likes to express itself through fashion and it has already made a statement by being one of the most important places to find the latest fashion and trend. This city is just like Paris or Milan of the southern and eastern hemispheres.

15 Best Places For Shopping In Melbourne

There are numerous fashion places in Melbourne that would definitely grab your attention. We have come up with a Melbourne shopping guide which includes everything from shopping streets in Melbourne to shopping in Melbourne factory outlets and more:

It’s not a mall but a pedestrian only section of the street which hosts different kinds of markets and shops. No one can complete his or her visit without shopping at the iconic Bourke Street Mall with its historical Victorian architecture and a collection of the finest, top of the shelf brands, like Zara, H&M, Myer, and David Jones.

Must Read: 10 Marvelous Melbourne Attractions to Mesmerize Your Senses

Go on a luxurious honeymoon trip to Australia and witness the best of marine life at the Great Barrier Reef. Indulge in Australia’s aquatic experiences, go for nature walks, and get the best of food & wine. Find best honeymoon deals offered only on TravelTriangle.

There’s something about Queen Victoria Market that any trip to Melbourne looks incomplete without shopping at this place. Established about 120 years ago, this is the biggest open air market in the southern hemisphere. One won’t be able to cover the whole place in a day. A place is known for its street fashion and cheap value for money clothing, but this market doesn’t have clothes as its main focus but other things like food, fruits, groceries and other such things.

Also known as the largest shopping center in southern hemisphere, the Chadstone Shopping Center is located in the suburbs, 30 minutes away from Melbourne. Surprisingly enough it has something for all the age groups and all the types of people from high end shoppers to relatively cheap local brand shoppers, everyone can shop something from here.

Suggested Read: 9 Fun Things To Do In Melbourne For A Hell Of A Trip

The newest addition to elite shopping in Melbourne Australia, Melbourne Emporium has opened just 2 years back. Even though it is a new place, it has become one of the favorite places to shop amidst avid shoppers. This is due to the presence of some of the most popular international brands such as Armani Exchange, H&M, Calvin Klein, Camila, and Lacoste to name a few. This is an absolute must visit place for those who want to experience high end shopping at its best.

Often known as the longest catwalk in the southern hemisphere, the Chapel Street extends to numerous neighborhoods and is around 2-3 km from each side. With a myriad of hundreds and hundreds of shops selling anything  from second hand clothing to high end branded clothing, this Melbourne shopping street is no less than a haven for shopaholics.

Suggested Read: 10 Free Things To Do In Melbourne

If you want to shop for the best high end brands at the cheapest rates then Direct Factory in South Wharf area of Melbourne, Australia, is the best place to be. A lot of brands with around 120 different factory outlets, this is a shopper’s destination. You can find anything here starting from Nike to Calvin Klein and MJ Bale.

Located literally beside the Bourke Street Mall and the Melbourne Emporium in the Central Business District of Melbourne, this one is a mall with multiple floors. Boasting a presence of over 300 shops within its premises, if anything that is left to make it iconic is that it is located around the historic Shot Tower. All this combined makes Melbourne Central a must place to shop.

Suggested Read: List Of 10 Most Livable Cities In The World, Melbourne Ranks #1 Yet Again

If you have thousands of dollars to spend on some of the most fancy brands, then head straight to the Collins Street for the best shopping in Melbourne. A street full of historical Victorian era styled buildings houses stores which have some of the most expensive brands on this planet. Make sure you have some extra Australian dollars in your purse when you are headed here.

Located in the inner part of northern Melbourne, the Brunswick Street is known for its bohemian street feel and alternative fashion stores. Always a lively place to be, this street is full of shops which offers chic street fashion items at nominal rates and the clothes are total value for money making it one of the best places for cheap shopping in Melbourne.

One of the relatively unknown place to tourists, the Rose Market is a market situated in a secluded part of Melbourne, which is the Fitzroy suburb of Melbourne. Famous for its handmade things, this market has everything from stunning homewares to hand sewn dresses up for sale making it amonsgt the best shopping malls in Melbourne.

This heritage shopping complex was set up almost a century ago, a great haint for shopaholics it has a great architectural building with marble floors and a glass canopy cover to accentuate your shopping experience. This arcade is part of Golden Mile Heritage Walk of Melbourne has features some of the best shops to indulge in sweet cravings like pastries, cakes and chocolates. Try Hopetoun Tea Rooms (that sells incredible cakes) & Haigh’s Chocolates.

Get a sneak peek into the rich cultural heritage of the area where the market is situated. The Brigade Road in Richmond gives you an opportunity to indulge in a unique shopping experience that has a glorious past dating back to the 18th century. The market was once the hub of corn and hat stores and has slowly progressed into leading fashion outlets, award-winning restaurants, cafes, furniture shops and more. It also holds heritage walk tours that are conducted around this area.

Find a luxurious range of apparel for men’s wear at the Flinders Lane which was established in 2009. Flinders Lane is the answer for tailor made, exclusive sharp prints with contemporary elegance for the modern men. This market hub is sourcing the finest yarns from across the world with a heavy influence on the colours and texture to give you the best of modern wear.

If you want to swooned away by luxury then this is the ideal haunt for all you shopaholics who like a bit of glitz and glamour. Every stepping corner of Toorak Corner reeks of luxury, from the huge palatial buildings to the designer outlets, this Melbourne’s answer to luxury shopping. It is famous for footwear, jewelry, cake shops, live music shows, handbags and more.

Known for shopping centres in Melbourne specialising in a lot of categories, it’s a shopper’s paradise and the second biggest mall in Australia. There are two floors in this mall that feature some fancy stores selling a whole bevy of categorised items like food, fashion, sports, beauty and wellness. You can find international brands and satiate your shopping desires.

Further Read: 10 Surreal Beaches In Melbourne To Enjoy A Laid Back Vacation

Q. What are the best things to buy in Australia?

A. Tim Tams, Opal Jewellery, Yarra Valley Wine, Boomerang, Aboriginal artwork, Macadamia nuts are some of the best things to buy if you’re planning to go shopping in Melbourne, Australia.

A. Australia doesn’t specially make these boots, so one might not get a cheaper deal here for Ugg boots. But the country is known for selling good quality sheepskin boots at much cheaper prices.

Q. Why is everything so expensive in Australia?

A. Mainly the manufactured goods are expensive in Australia because of the high retail and manufacturing wages, high cost of distribution and also higher rents. And alongside that there is also an issue of importation and distribution.

Q. What Australia is famous for?

A. Australia is considered to be one of the most highly urbanised countries which is known for its beautiful beaches, deserts and the vast cities like Sydney, Melbourne, Brisbane and Perth.

Q. How safe is Melbourne Australia?

A. Melbourne is one of the safest cities in Australia, ranked as the 10th out of 162 in the list of safest and dangerous countries.

Q. What is the best month to visit Melbourne?

A. March to May and September to November is considered to be the best months to visit Melbourne due to the moderate climate.

Shopping In Ubud: 13 Best Places Where Shopaholics Can Shop & Splurge In 2020!

10 Best Places To Go Shopping In Bangkok To Splurge On Your Thailand Vacay!

Shopping In Paris 2020: For Buying Everything From High-End Fashion To Classic Souvenirs!

New Year Party In Australia 2020: For Slaying The New Beginnings In Aussie Way!

Sydney In January 2020: A Handy Guide For Exploring The Most Astonishing Views Of This City!

Get The Rajasthani Bohemia On! 15 Amazing Shopping Places In Jaipur To Explore In 2020!