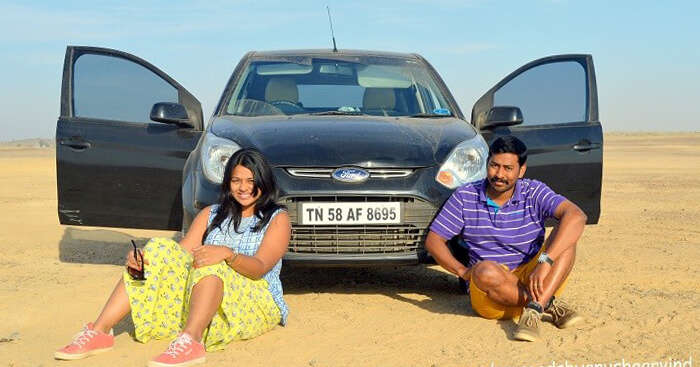 Taking a 6000 km road trip from Bangalore till Indian Border and back, Anusha and Arvind proved the world that romantic getaways can be adventurous too.

The journey which also included exploring Rajasthan was an amazing experience for the couple.

The idea and inspiration

The idea for this trip struck the duo when they found out that the Tanot Border, separating India and Pakistan, was accessible to public via special permission.

“As soon as we found out we could go there, the trip had a new meaning for us, we now not only wanted to explore Rajasthan but also the border that in many ways represented our victory in the 1971 war.” – Anusha.

Suggested Read: An Indian Girl Is Travelling Solo Without Quitting Her Job! Join Her Journey

Planning for the journey

And so the two professionals began planning. The first step included fixing timelines followed by finding information about everything they would be encountering during the trip including routes, tolls, hotels, fuel, sightseeing, and food.

“We also found out everything that would be required to get special permission from the border authorities that will allow our vehicle and us to go till Border Pillar 609”. – Anusha.

Getting the best deals!

It took quite a few hours for Anusha to figure out how to get the best hotel deals but once it was done, booking was only a half day affair. Her ingenious methods which involved using referral and bonus credits and booking through multiple accounts saved her a lot of money (up to INR 10,000) with some rooms even costing them around INR 350 per night after discount.

The couple also prepped up their personal vehicle ‘Ford Figo’ and after Arvind was satisfied with all the checks and tyre changes, they began their journey on the 24th of December, 2015 at around 3 AM.

Suggested Read: The Story Of This Ordinary Man And His Extraordinary Love For Travel Will Definitely Inspire You

“It was a mind-blowing experience for us and the hospitality and warmth that we experienced from the people of Rajasthan totally changed our opinion about North Indians”. – Anusha

The couple elaborates on how on two different occasions they were allowed to use the kitchens of the dhabas when they wanted to make their own food. “Not a single penny was charged from us and that itself tells you about the heart and hospitality of the locals”. – Anusha.

Suggested Read: This Indian Blogger Shares The Untold Reality Behind Quitting The Job To Travel The World

Places like the drive-in Chittorgarh Fort and the scenic Monsoon Palace in Udaipur mesmerized the couple and activities like zipline in Mehrangarh Fort (Jodhpur) all added to the vast array of experiences that Rajasthan offered. They loved the rich cultural heritage of Jaisalmer and were particularly in awe when it came to the majestic Jaisalmer Fort. The ‘Dune Bash’ with all its fun and frolic was an out of the world experience too.

“Spending nights in the open, that too in a desert! Not many people get to do that, but I guess we were the lucky ones.” – Anusha.

However, finally, when they reached the Tanot Border, they found out that for some reason, their names were not on the list of permissions. Shocked and scared, their dream of visiting the border started to dissolve. But they did not give up! After providing all the necessary documents that proved they were out to journey the border, the officials finally relented.

“More than the documents, I believe it was our patriotism and conviction that won them over” – Anusha.

“The 20 Km road journey from Tanot Border to Border Pillar 609 was the most exciting thing we had ever done! There wasn’t a single car on the way and we couldn’t contain our excitement. Patriotism engulfed us and soon we were singing songs and anthems.” – Anusha.

The couple also clicked a lot of pictures and even spoke to the soldiers assigned there who were quite surprised to see the couple wanting to visit the area out of interest.

Later, in Longewala, they also saw the smashed tanks, bombshells, and jeeps that had been kept as it is, after the war of 1971 was over.

“Suddenly the whole war scene was in front of us and in our minds we couldn’t even imagine how the 120 jawans would have protected our country. It was scary and we are very thankful to the Indian Army ”. – Anusha.

The couple spent their New Year’s in Jaipur and it was a colorful experience for them. Famous attractions like Amber Fort, Jaigarh Fort, Bazaars, City Palace and many more were a part of their itinerary and they enjoyed every bit of these.

“Jaipur was majestic, from seeing the longest firing Canon to shopping in Bazaars to witnessing the royal magnificence of Amber Fort – it felt as if we were back in the era of royalty.” – Anusha

Although, not a part of their route, but the couple also visited the Taj Mahal. “Arvind had planned this as a surprise for me and when in the morning he told me about it, I was ecstatic. He had even packed a dress for me!”. – Anusha.

And after a successful stint at the Taj Mahal, the couple then proceeded back home.

Suggested Read: Where There’s A Bike There’s A Way: Account Of A Solo Biker Chick Traveling Across India

“This trip was so much better than the usual romantic dates and dinners we all go out. It was a life changing experience and frankly speaking, spending time like this got us even closer. The 11 sunrises we saw, the rush of reaching the next destination on time, our dancing on loud music in the middle of the road, and most importantly, the pride that we felt in accomplishing this – all add to the beauty of the experience. We loved the warm people of Rajasthan and will be forever indebted to their hospitality.” – Anusha

You can do it too!

Road trips like the one Anusha and Arvind took simply points out that it is all about the priorities and passion for travel. They managed to cover more than 6000 km in 11 days and that too on a budget. For around INR 50,000, that included their fuel, sightseeing, food expenses, permits, toll charges, and stays – they were able to quench their wanderlust and make memories that will stay with them for a lifetime.

Sharing a few tips with us, they believe everyone can do car journey like them on a budget if they follow these travel mantras –

Anusha and Arvind were able to able to cover thousands of kilometers and the roughest of terrains in happiness. Sharing their last advice for a successful trip and a life, they say –

“It was easy for us because we were not focused on the destination, instead we enjoyed the journey, and that has made all the difference. In the end, we should always remember, it is the little things that matter much!” – Anusha and Arvind.

Vietnam Shopping: 21 Places For Shopaholics Fancying An Astounding Experience In 2021