Burj Khalifa: The Tallest Building In The World 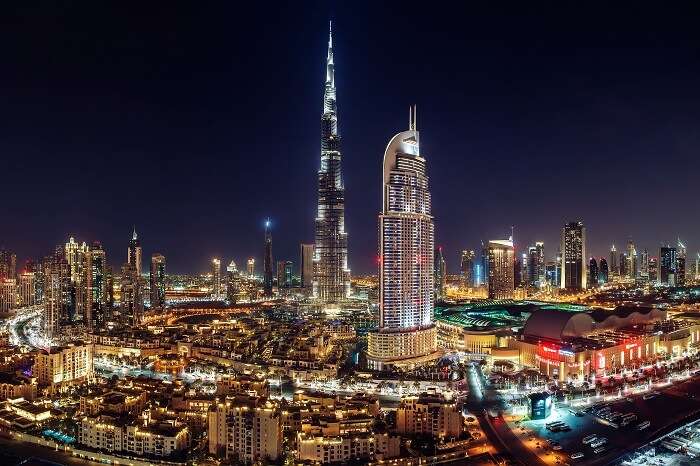 The tallest building in the world! Stunning architecture! Engineered to perfection! The Burj Khalifa is all this and more.

Redefining the possibilities in design & engineering, the Burj Khalifa is a mega tall skyscraper in the newly developed Downtown Dubai. It is, by far, the tallest building in the world. The building draws its inspiration from the Islamic architecture and still reflects the modern community that it is built to serve.

Here’s what you need to know about the world’s tallest structure before you plan a holiday in Dubai.

Where is Burj Khalifa located?

Burj Khalifa is located in the Downtown Dubai complex situated along the Sheikh Zayed Road, across from Al Wasl locality on the Northwest. The complex has Burj Khalifa, Dubai Fountain, Dubai Mall, Burj Park Island, and The Address Downtown Dubai hotel at the center.

How tall is the Burj Khalifa Tower?

Burj Khalifa, the tallest building in the world, stands at a whopping 829.8 m (tip to tip). There are 163 floors in the tall skyscraper.

1. At The Top: Burj Khalifa Sky Lounge and observatory desk

Situated 555 m above the sea level, At The Top Burj Khalifa Sky Lounge is the highest observatory deck in the world and hence been open since the ides of October of 2014. Before this, the record was held by At The Top Burj Level 124 deck until Cloud Top 488 on the Canton Tower in China opened in December 2011.

Suggested Read: Do Not Come Back Without Visiting These 12 Tourist Places In Dubai

Occupying 37 of the highest levels of the Burj Khalifa, the Corporate Suites are ultimate business destinations for the corporate high-flyers. Of these, the top 3 levels are merged into a single office.

If the contemporary elegance of the restaurant, the exclusive appeal of the private dining, and the casual yet sophisticated aura of the lounge were not enough, the fact that you would be dining at 442 m above the city makes dining at At.Mosphere a splendid experience.

Suggested Read: 20 Exotic Dishes From Dubai Cuisine That Serve As The Gate Pass To Heaven

Sky lobbies are intermediate levels. Elevators directly lead to sky lobbies, skipping the levels in between. From sky lobbies, one can switch to elevators that stop at all floors. The Burj Khalifa has 3 sky lobbies, with amenities including state-of-the-art fitness facilities, indoor/outdoor swimming pools, Jacuzzis, and a recreation room for gatherings & events.

Over 900 prestigious residences – studios and suites with 1, 2, 3, & 4 bedrooms – offer an array of amenities and services that provide residents & their guests an unparalleled lifestyle experience.

Also designed personally by Giorgio Armani, the Armani residences reflect his personal approach to elegance. The intricate furnishings and the superb luminous lighting have been cleverly combined by the designer.

The Dubai Fountain on the 30-acre manmade Burj Khalifa Lake at the Downtown Dubai center is coveted as the world’s largest choreographed fountain system. It was designed and developed for USD 218 million by WET Design, the California-based company that designed the fountains at the Bellagio Hotel in Las Vegas.

The 275 m long fountain system shoots up water up to 152.4 m into the air. Illuminated by 6,600 lights & 25 colored projectors, the fountain system is accompanied by an array of classical & contemporary music from around the world.

Surrounding the Burj Khalifa Tower, the 27-acre park designed by SWA Group includes 6 water bodies, gardens, palm-lined walkways, and flowering trees. Right at the center of the park & the base of Burj Khalifa Tower is a series of pools & water jet fountains. Much like the tower, the park too is based on the symmetries of the desert flower Hymenocallis.

Rooftop: Savor the rich culinary finesse & the exotic beverages as you enjoy the views from the vantage point of Burj Club Rooftop.

Spa: The luxurious facilities & the relaxing views of Downtown Dubai offered from the Burj Club Spa are more than what you could hope for. Holistic facials, myriad massages, relaxing body treatments, sauna, steam rooms, and thermal showers are some of the exemplary facilities that one can enjoy at the club’s spa.

Gym: The Burj Club Gym combines fitness sessions with spa treatments and healthy diet as a part of the complete wellness programs crafted for individuals. And there is an altogether separate level dedicated to ladies that includes gym and spa facilities.

Suggested Read: 11 Absolutely Free Things To Do In Dubai

Oh, and did you know that base jumpers Fred Fugen and Vince Reffet set a world record by leaping off the 155th level of the Burj Khalifa in Dubai

And before we take your leave, here’re some more shots from the Burj Khalifa Tower

Further Read: Come 2018, Burj Khalifa Will No More Be The Tallest Building In The World