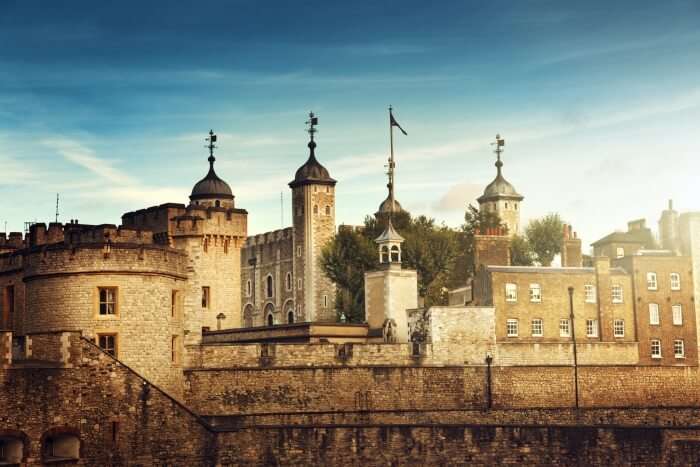 There are various places which are worth visiting in London and also around London. In the middle of London, there is the House of Parliament, Westminster Abbey and also the Big Ben-the clock tower. A person could get a spectacular view of the entire city from the Thames River. The castles in London and also the castles around London are famous around the world. Castles in London England are some of the best castles which are the most beautiful and popular in the whole world. Here is a list of castles in the London area. Have a look!

Top 10 Castles To Visit In London

London is the capital of the United Kingdom (UK) and England. The people in London and also the people, who visit London, love to spend time visiting various castles in the UK.

It is not located exactly in Central London but it is on the boundary of London. Hampton Court is not exactly a Royal Palace from inhabitant but yet it has a lot of Royal history especially of Henry VIII and his wives. Henry made a few changes in the palace by making a giant hall of medieval style, enlarged the kitchens and also built a Royal Tennis court. There is a maze in which a person could get lost easily.

Must Read: London Travel Tips: For An Amusing Vacation Experience Like Never Before!

2. The Tower of London

It is the oldest fortresses in London. It had been built after the Norman Conquest of England. It was made for royalty and he needed a safe palace for living in. It is a very defensive castle along with two defensive walls and also a moat. It gives the feel of a castle to the visitors. It is the home of English Crown Jewels and it has hosted many historical events among which a particular event was the execution of 112 people including Lady Jane Grey and Anne Boleyn. Today it has become a very popular attraction among tourists.

Kensington Palace is famous in the world and known as the birthplace of Queen Victoria after which the entire Victorian era was named. A person walks through the Kensington Gardens and Hyde Park will lead to the Kensington Palace.
The Palace is currently the residence for many royal family members who include Prince Harry and William. Some parts of the apartments which are under use are closed but other than that the whole palace is open for public people to visit. There is also an amazing café to visit here.

Suggested Read: 10 Historically Significant Castles Near London You Must Visit When Exploring The City

The first place that would come to a person’s mind after thinking about the British Royal Family would be the Buckingham Palace. The Queen creates knights, receives ambassadors, and holds the banquets in State and all the other Royal duties also take place in the palace. Due to its so much usage, it is not open the entire year for the public. A person could visit during the months of July and August. The world famous guard ceremony takes place in the Buckingham Palace, which is the most important landmark in the United Kingdom.

Hever Castle is at a distance of one hour from London by train. It is a double-moated castle. In the olden times, Henry VIII’s 2nd wife Anne Boleyn used to stay here. This castle has 3 floors which are filled with antiques, books of prayers which belonged to Anne Boleyn and also a collection of Tudor portraits. David Starkey considers these portraits as one of the best collections of Tudor portraits which come after the National Portrait Gallery. The castle is spread in an area of 125 acres and there are total 3 mazes to get lost at this place. A water maze in which the idea is to get to the center without getting wet, a tower maze which is similar to children’s adventure playground and a yew tree maze which had been planted in 1904.

Leeds Castle is located in Kent. It could be reached in a short time of 2 hours from London. It has been built since the 19th century. This castle is spread in an area of 500 acres of amazing parkland and it has a great range of activities during the whole year. It has a dog collar museum, 2 playgrounds, falconry displays and also the castle was once the home of Henry VIII and Catherine of Aragon who was his first wife. People usually get lost in the maze and it is actually a lot of fun to even get lost and you will be rewarded for the efforts that you put in at the end of the maze.

This castle is the most famous one for being the filming location for the Downtown Abbey which was a popular drama series of the British period. Julian Fellowes was the creator of this series and he had this castle in his mind at the time he wrote it. There are a lot of things to see in this traditional castle that is set up in an area of 5,000 acres in West Berkshire. In this castle, there are many Egyptian artworks and Egyptian jewelry which is kept for display. This castle is still a residence and so it is open only for 60 to 70 days in a year for the public people to visit.

This castle is the largest castle in the entire world and also the oldest one. This castle is the home of the Queen. The famous attractions of this castle are Queen Mary’s dolls’ house which is very famous in the whole world, The State Apartments which has been furnished with the Royal Collection and also the private apartments of George IV are worth seeing. If you have some more of spare time after seeing the castle then you should definitely check out the Windsor town. It is fun to walk along the River Thames.

This castle is located in the Forest of Dean. It is a perfect castle in London for weddings. It is like a fairytale for the couples. It has a 75ft long aisle which is long enough to make a grand entrance. In the ballroom, the leaded glass windows are very beautifully decorated. The wedding is incomplete without a photo shoot. The grounds are an ideal place for the wedding photo session.

It has been set up on the Cornish coast. This Tudor castle is a perfect wedding place for the people who are looking for a perfect romantic wedding. If you want you can even take your wedding inside the castle and get it decorated with flowers, candles, and tapestries. The grounds are ideal for drinks and photographs before taking the dinner in the Royal Artillery Barracks.

This is the perfect list of London castles tour. The people have to spare a lot of time to enjoy and visit castles in London. On your trip to London, after sightseeing of the usual hotspots around London, do ask your guide to take you to the tour of these castles. They might take some time but they will be worth it. Also, let us know about your experience.

What Makes Malbork Castle In Poland A Must Visit Attraction For The Tourists?

Hohensalzburg Castle: Witness The Glorious Architecture Of Austria The Country Is Proud Of