London Nightlife: 15 Exhilarating Experiences For A Night Out In The City 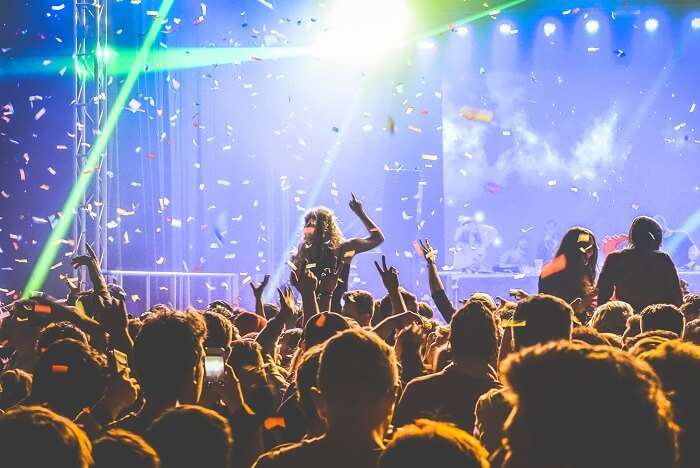 London has more than just history and monuments. It’s a thriving metropolis and one of the most happening places in the world whose sophisticated and formal British manners come off at night to showcase a fun and lively personality! Thanks to the glam London nightlife, the real fun begins here at sundown!

Here’s Where You Can Enjoy The Best London Nightlife

From dancing away at the best nightclubs in London, playing roulette at the casinos, to strolling around in the city, there is no end to how much one can enjoy in London at night.

The Best Clubs In London

Know where you can groove to hit numbers played by the hottest DJs in town:

Image Source
Fabric is definitely among the top clubs in London and rated the 3rd best in the world! Its awesome pulsating ‘bodysonic’ dancefloor with over 400 bass inducers are why it’s one of the best dance clubs in London. It’s best known for dubstep, house and techno music.
Location: 77A Charterhouse St, Clerkenwell, London EC1M 6HJ
Entry cost: INR 940/- per person (£10)

Suggested Read: These Best Places To Visit In London Prove Why It Is The Most Iconic City In The World

Disco and techno music rock the floors of XOYO, a crowd favorite among the clubs in central London. DJs including The 2 Bears, Jack Bears, Skream, and Bicep have performed at XOYO making it one of the most consistently good clubs in London.
Location: 32-37 Cowper St, London EC2A 4AP
Entry cost: INR 840/- per person (£9)

Image Source
With free entry on Mondays, Cargo is where you can beat those blues! It plays the best music among other r&b clubs in London. Other genres include hip-hop, pop, and funky house. One of the best clubs in London, it has a rustic vibe and is built in a disused railway yard!
Location: 83 Rivington St, London EC2A 3AY
Entry cost: INR 940/- per person (£10)

All nightcrawlers know ‘Ministry of Sound’, and it’s their flagship club in the heart of London. Ranked among the best nightclubs in London, it has hosted the world’s best DJs and plays house and trance music.
Location: 103 Gaunt St, London SE1 6DP
Entry cost: INR 1,880/- per person (£20)

Image Source
Symbolising rebirth, ‘Egg’ London is now a permanent fixture on the London nightlife scene! With a capacity of over 1,000 in five rooms, it is among the largest clubs in London. You can dance away till dawn to trippy electronic music.
Location: 200 York Way, London N7 9AX
Entry cost: INR 280/- per person (£3)

The Best Bars & Pubs In London

Need a quick drink after a long day at work? Head to these awesome places:

Opium is where you can head for a night of great food and drinks. Here, China meets Britain in a funky mix of dim sums and cocktails! Open till 3 AM on the weekends, it’s one of the best places to experience the London nightlife.
Location: 15-16, Gerrard St, London W1D 6JE
Entry cost: INR 6,560/- for two (£70)

Fashioned in the stylish 70’s vibe & inspired by the Saville Row tailors, this bar is a must-visit to check the vibrant London nightlife. It’s the ideal mix of laidback fun with cool music. Pick a drink from ‘LCC Legends’ like the eccentric ‘Bacon & Egg Martini’ and you’re set for the night!

It has entertained Londoners since the 17th century. This iconic pub still offers the best nightlife in London and fantastic food along with the best British cask ales, craft beer, wines, and artisan spirits.

There’s a lot more to London nightlife than jazzy clubs and bars.

Soho is possibly the most chic neighborhood in London. It offers amazing stand-up comedy, cabaret, and theatre across its three venues. It will, without a doubt, end up being one of the best night outs in London.
Location: 21 Dean St, Soho, London W1D 3NE
Entry cost: INR 1,125/- per person (£12)

Suggested Read: 15 Romantic Things To Do In London For Couples Madly In Love!

No mention of London nightlife spots is complete without the Hippodrome Casino, the best in all of UK! This casino is open 24/7 and offers awesome entertainment with 3 floors of casino games, a theatre for cabaret, & music shows.
Location: Cranbourn Street Leicester Square, London WC2H 7JH
Entry cost: Free!

The Best Of Outdoor Nightlife In London

Here are some offbeat places where night owls can experience the awesome London nightlife:

Image Source
Searching for fun nights out in London? Look no further than the Ghost Bus Tour. This 1960’s iconic London bus takes you through the gory and macabre history of the sights of London to spook you out!
Location: 8 Northumberland Ave, Westminster, London WC2N 5
Entry cost: INR 2,160/- per person (£23)

The best London nightlife areas includes the grassy Primrose Hill that offers the most spectacular panorama of London city. Open 24×7, the hill is the perfect spot for you and your sweetheart to experience London nightlife. Go watch the twinkly city lights and count stars in the night sky!
Location: Barnet and Camden

Image Source
A night walk through the city’s most famous landmarks will offer a glimpse of the best nightlife in London. The city is beautifully lit at night and perfect for that photo op as you walk through Westminster Abbey, Trafalgar Square, Big Ben, and along River Thames.
Location: Central London

Further Read: London vs Paris: Which City Would You Prefer For A Fancy Holiday?

Amazed at the variety of London nightlife experiences? We bet you are! And if you think we missed any trendy clubs in London, let us know in the comments below. Make sure you book your London trip with TravelTriangle for the best vacation ever!

Q. What is London known for?

A. London, the capital city of the United Kingdom and is one of the most popular cities in the continent. Apart from being the economic center of the UK, London is home to a number of attractions and monuments, museums and art galleries which are major dar for tourists from far and wide places.

Q. When is the best time to visit London?

A. Visiting London during the spring season of March to April, you can witness the blooming gardens, green parks, and mild summers while the months of May can get you great discounts and fewer crowds as it is the shoulder season.

Q. What is there to do in London?

A. Amazing things to do in London for a wholesome experience of the city are:
1. Witness The City From A Bird’s Eye View from the London Eye
2. Tour Around The Magical World Of Harry Potter at Warner Bros Studio
3. Embrace The Old-World Charm at Museum of London
4. Go Thrift shopping at Camden Market
5. Relish A True Culinary Experience

Q. Does London have a good nightlife?

A. The city of London is quite renowned for high-end clubs, world-class theaters, trendy nights out in Shoreditch and groovy live music. From comedy shows to theaters, for electrifying and lively nightclubs to packed bars, when in London, you are sure to be spoilt of choices when it comes to nightlife options.

Q. Which place in London has the best nightlife?

A. Shoreditch, Camden Town, Brixton, and Soho are some of the most popular neighborhoods where you get to enjoy the best nightlife in town.

Q. Is it safe to walk in London at night?

A. London is mostly safe but it’s not recommended to walk around in the city especially if you are a female traveling all alone.

Try Your Luck At These 10 Casinos In Hong Kong For A Fun Night In The City!

Nightlife In Kolkata 2021: 20 Places That Make The City Of Joy More Joyful