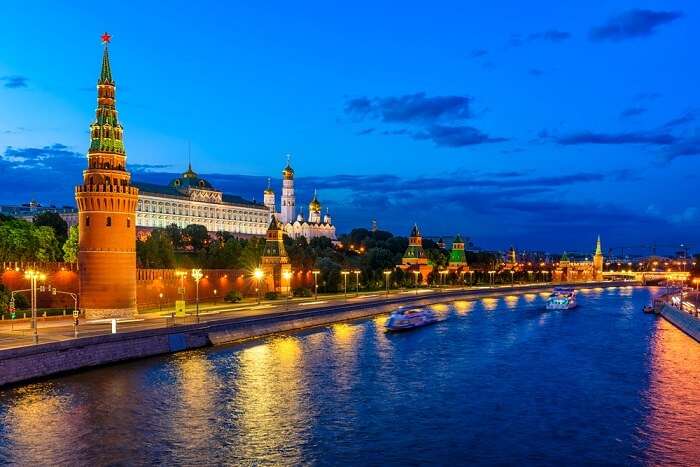 Moscow is a city of high cultural and importance. It has lively architecture from ancient times, this city has been capital to one of the world’s most powerful countries. Take a look to know more about the castles here!

Vorontsovsky Palace is built overlooking the black sea, which makes it landscapes magnificent. Its magnificence is not only from its surroundings but also from its architectural style, its history, and cultural significance. It is the oldest and largest palaces built on the foot of Crimea mountains. Its stone was locally mined to blend in with surroundings. Its architecture shows a perfect blend of various architectural styles to give an output of perfection and beauty.
This place has an interesting history which tells us British prime minister stayed at this palace during Yalta conferences. There is lion guarding the palace which is known to interest Winston Churchill during his visit to the palace. During summers the park outside this palace is filled with blooming rhododendrons.

Dulber palace was built as a residence for a royal family of last Russian imperator. Its beauty is from its asymmetrical style. Its large silver cupolas adorned the skyline with the backdrop of Crimea mountains. Its building is white in color and its facade is adorned with mosaics and blue ornaments. Carved stones are skilfully fitted into it. It is unlike many other Russian architectural buildings, is simple and worked as a life-saving castle for members of royal families after the revolution of 1917. It is home to one of the prestigious sanatoriums.

The Meyendorff castle is a castle that magnificent architecture of Russia. Its style is excellent example old French architecture. Originally built as residence to Meyendroff family, it has its own fascinating history. When the great war broke out, original residents of Castle left and this castle was later occupied by Vladimir Lenin and other people. This place is also associated with many great people who have stayed there. It also has world cemetery marked by the Mamayev monument.

Other Places To Visit In Moscow

While you’re in this stunning Russian city, don’t forget to catch a glimpse of certain famous places here that you must visit on your next holiday to Russia!

Donskoy Monastery is building standing from historical times and now serving as a religious place for Orthodox Christian. This monastery was founded as residence to Virgin of Don icon. Its important for both those who wish to explore orthodox Christian and history. It was one of the structures that were built the period of fortified buildings and serve as an excellent look back into the time. It was ransacked majorly twice in history but have survived both and currently also transformed into a Museum. It is also attributed that victory over Tartar troops was because of the lady of don icon.

This place is not a popular tourist spot but it is quite photogenic in its appearances. Its beautiful surroundings made its choice for many filmmakers as the location for their shoot. With a church similar to Kremlin’s churches and lush green gardens makes is very peaceful. With the land this monastery covers, its a wealthy monastery situated littles outside from the main city.

Moscow Kremlin is Russian seat of power. Kremlin originally means Russian citadels but now it is synonymous to Moscow Kremlin. It is a huge fortified complex which includes 5 palaces and four walls. Its grandeur makes it every tourist dream. Its beauty in its picturesque palaces and its history does rest of charm on its visitors. The Grand Kremlin palace which is the residence of the Russian President is adorned with gilded exteriors. Its ornate walls make and its striking architectural is complementary with its long and fascinating history. Many buildings in Kremlin are now museums displaying grandeur of powerful families that resided here. One such building is the Armoury chamber. It is home to deadliest weapons once in history, now these museums houses most valuable and flamboyant weaponry, jewelry and royal family’s household items.

Vysotsky monastery is also an ancient architecture which after the original construction was destroyed and subsequently rebuilt. It has seen many up and downs in its glory. It was even just as used as barracks to becoming fully functioning monastery surrounded by large white walls. One of thing about this monastery if you are strictly prohibited to take photos of territory for some reasons not clearly explained. It has beautiful five blue domes adorning its skyline which makes it seem like pretty Castle. It has its prosperity derived from a copy of the icon of inexhaustible chalice which makes it a very religious and large number of pilgrims visit it from all over Russia. It is known to be very effective in the treatment of alcoholism.

Other things to do in Moscow

Moscow thrills like an adventure to any enthusiast of history, culture, artistry, and majesty. At the very heart of the city, is grand Kremlin and red square. The history begins here, the culture of the city begin here, the city begins here. Right here at the heart of Moscow in Russia, is standing ancient fortress and red square. St. Cathedral church is beautiful and magnificence and is center Spirituality of the city. Along with its cultural significance, this city provides you with a very active nightlife. Providing a variety of options of all ranges, you choose the bar you like. It may require you to follow some sort of dress code at the bar.

Russians respect and proud of their history. For this, they have built a state historical museum. It seems like no less than a castle or Moscow palace and houses impressive collection and artifacts from history, of many tribes that lived here and also the world’s largest coin collection. If you are a big fan of the buzzing street in the city and how life goes by on it. Arbat street is the place you must visit. It is buzzing with lots of cafes and restaurants, music performance by the live band and a beautiful number of the artist making caricatures and tattoos.

You can also buy souvenirs from here. It is crowded every day. It even has Gorky Park which is no less than adventure park. It provides you with yoga classes, natural pool, dancing sessions, area built for a variety of sports. It also includes an open theatre. If all this still doesn’t excite you then you must know it turns into the biggest skating rink in the city. If you are excited by the flea market, then Moscow won’t leave you disappointed. You should definitely visit lzmaylovo. It is city flea market with lush green surroundings.

Take note of these to make your visit to Castle in Moscow an enjoyable one.

You can never miss out the grandeur of this city and charm of tales of history it has to tell. You will feel like you are walking through ages and history. At every turn, you can find different architectural style waiting for you. Moscow creativity is not only reflected in their buildings but it is home to a great number of museum and libraries, including paintings of a lot of historical significance.

Public parks of Moscow are no less than adventure parks or sometimes all facilities of indoor stadiums. Major city attractions are walking distance from the city center or from each other. Also, you walk around the city is going to very enjoyable. For city sightseeing, they provide service of a red open double-decker bus, which gives you tour of every major sport of city. To see complete beauty you must never miss a boat trip in Moskva River. So, what are you waiting for? Plan your trip to Moscow with TravelTriangle and know what awaits you in this scenic land of wonders!

What are the names of the castles in Moscow?

Some castles in Moscow are Vorontsovsky Palace, Dulber Palace, and more.

Castle Rushen was built in the 1200 AD for a Norse king.