15 Interesting Things To Do In Moscow: Trekking, Opera, And More In 2021 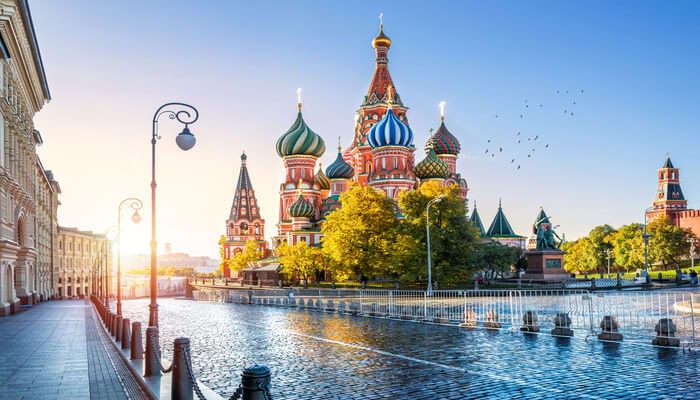 The heart of Russia, Moscow is a modernized city with a powerful mix of vibrancy and edginess. Located on the Moskva River in the Central Federal District of European Russia, this 869-year-old town thrills its visitors with its style, grandeur, and antiquity. Its amazing history and culture have given rise to a number of things to do in Moscow that draw travelers from far and wide. Visit this vibrant city during the early spring (June) to enjoy the best that Russia has been hiding!

15 Best Things To Do In Moscow

Visit this vibrant city during the early spring (June) to enjoy the best that Russia has been hiding! Here’s our pick:

Start your trip by getting blessed at this UNESCO World Heritage Site. Also known as the Cathedral of Vasily the Blessed, the church is now a museum. Get stunned by the cathedral’s architectural magnificence designed on a flame of a bonfire. At night, the lit up cathedral looks very lively and colorful and you will never regret visiting it.

Image Source
This ultimate shopping destination for international brands is actually a royal 3-story building with a semi-circular glass roof and houses over 300 international and national brands. This departmental store also has many world famous restaurants and cafes like Abrau Durso Champagne Bar, Beluga Caviar bar, Stolovaya No 57, and more. The entertainment partner GUM Cinema is a chamber theatre featuring movies in three different halls.

Sparrow Hills, also known as Lenin Hills, is the highest point in Moscow. Trekking to these hills is one of the most adventurous things to do in Moscow. It offers unparalleled panoramic views of the city below which is a mesmerizing sight at night.

Watch Russia’s authentic Bolshoi Ballet and Bolshoi Opera in the neoclassical theatre designed by architect Joseph Bové. Watching a ballet performance of Romeo and Juliet or an opera concert performance of The Maid of Pskov is undoubtedly one of the historical things to do in Moscow.

The Poklonnaya Hill, meaning “bow-down hill” or “Worshipful Submission Hill”, is one of the highest points in Moscow and offers splendid views from the top. The hill houses a museum and the Victory Park with many war tanks and vehicles used in World War II.

Image Source
This popular recreation spot also hosts a number of cultural events like ballet, opera, and concerts. If you are lucky, you could stumble upon famous actors like Sarah Bernhardt, Ernesto Rossi, and Gustavo Salvini while you are here.

Suggested Read: 10 Cool And Unusual Things To Do In Russia That You’ve Never Heard Before!

The ice-skating rink at the Gorky Park is as big as 15,000 square meters with separate zones for children. If you are looking for Moscow activities for kids, this park is a must-see. Other fun things to do in Moscow in this park include general skating, hockey, and a wide variety of rides.

Suggested Read: 6 Festivals In Moscow: Extravaganzas That Will Light Up Your Russian Vacay!

Riding the city’s underground rapid transit system is an experience in itself. The vaulted, marble-columned stations, some with ornate mosaics and splendid stained glass are architectural marvels. iF you are wondering what to do in moscow, just board the metro, the sixth longest in the world, and explore Moscow’s neighborhood!!

Image Source
In the 15th century, the today’s Sokolniki Park was a thick forest and was used for grand ducal falcon hunt by the kings and princes. Later, it became a social gathering place for nobles and common people. Today, it stands majestically in a thick cover of a woods as one of the largest and oldest parks in Europe. It is a great place for Moscow activities with Just Jump! Trampoline Arena, Karting Centre, Chess and Draughts Club, and School of Unicycling.

Image Source
It is Moscow’s premier love-it-or-hate-it landmark and is home to a glass sarcophagus with the embalmed body of Vladimir Lenin, the legendary Russian revolutionary. It was first opened to the public in the year 1924 and attracts over 2.5 million visitors each year, who do not miss a visit to this sanctum even if they have to stand in a long line and go through a thorough body search juts to get into the illustrious building. With so much to offer, visiting it is surely one of the most unusual things to do in Moscow.

Image Source
You must remember this building from the superhit Hollywood flick Mission Impossible! Well, don’t worry! No one blew it up in reality. It still stands tall and majestic and is still one of the most important buildings in Russia. It is essentially the largest active fortress in Europe and offers a week’s worth of attractions. The walls are 2,235-meter long kremlin and there are five squares to wander around. The Kremlin has numerous buildings to explore, about 20 towers that you won’t be able to recall, as well as the world’s largest bell and cannon to witness. If you’re looking for out of the ordinary and different things to do in Moscow, count this in!

Image Source
Appease your thirst for shopping by heading to this street and indulging in a little street side retail therapy. It’s an elegant historic street located in the city center and also among Moscow’s most touristy spots. It has a variety of cafés and restaurants, and one can also spot some live music performers and caricaturists performing here every now and then. There also are many souvenir shops and tattoo salons here along with a few monuments and a theatre, luring in visitors day after day. Watching these intriguing and mind-blowing performances here is surely among the best free things to do in Moscow.

Image Source
Built between 1900 and 1905, the Tretyakov Gallery had initially started as the private collection of the Tretyakov brothers. It was designed by Viktor Vasnetsov and this beautiful gallery houses one of the biggest collections of Russian art on the planet. When you’re here, you will be able to see icons such as the Rublev’s Trinity, as well as witness pre-revolutionary masterpieces including the likes of as Girl with Peaches by Valentin Serov, Demon by Mikhail Vrubel, and Rooks have Come Back by Alexei Savrasova among other notable works.

Image Source
The Gorky Park is undoubtedly among Moscow’s premier green spaces and offers tonnes of entertainment for every taste. From outdoor dancing sessions, yoga and fitness classes in the summer, to activities like beach volleyball, ping-pong, rollerblading, skateboarding, cycling, this place offers everything. One can even ride a segway or go on a boat tour once they’re here. The city transforms into Moscow’s biggest skating rink in winter. The iconic park also has an open-air movie theatre and the Garage Museum of Contemporary Art, which is why visiting this place is among the best things to do at night in Moscow if you wish to watch a nice movie under the blanket of stars.

We hope we have given you enough to indulge in with our list of the top 10 things to do in Moscow. Now all you have to do is book your next trip to Russia with TravelTriangle with friends and family and explore all that this beautiful city has to offer!

Frequently Asked Questions About Things To Do In Moscow

Which are the famous things to do in Moscow at night?

The most famous things to do in Moscow at night are visit the Red Square and experience the nightlife at SOHO rooms.

Which are the best things to do at Moscow airport?

The best things to do at Moscow airport are visiting the St. Nicholas Chapel and History Museum of Sheremetyevo.

Which are things to do in Moscow in February?

You can visit the Cheese Fest at Falcon and Sparrow Hills in Moscow in February.

Udaipur Honeymoon 2022: A Rich, Romantic, And A Royal Start To Your Happily Ever After!

The 7 Best Places To Visit For Rock Climbing In India