5 Historical Caves In Turkey Which Will Give You Some Serious Adventure Goals! 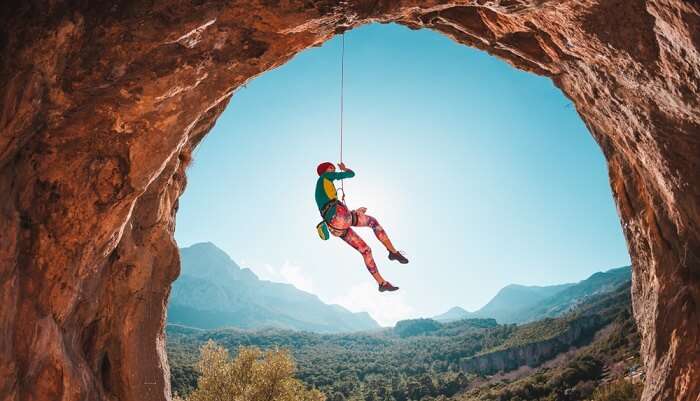 Turkey is a country which is blessed with a rich history, scrumptious cuisine to taste and a line of pristine beaches to sit back and relax. And to back up this landscape beauty, there are beautiful mountains in the backdrop. But apart from another thing which makes Turkey famous are its natural caves which can be majorly witnessed in Cappadocia. The caves in Turkey are different in their own way and makes one of the valid reasons to visit this country and explore these natural caves.

Here are some of the famous and ancient caves in Turkey which one must visit when they plan to visit this country.

The Altinbesik cave is located at the western steep of Manavgat Hill and considered as one of the most famous caves in Turkey. This a partly active cave system which derived its name from the Altinbesik hill which is on the upper side of the cave. Carved from an old limestone, this cave is surrounded by surreal natural beauty and impressive local architecture. The highest point of this cave is 101 meters high and this place is also known for having one of the most unusual subterranean lakes in the world.

Suggested Read: 6 Iconic Bridges In Turkey That Are A Paragon Of Beauty & Magnificence!

One of the lesser-known yet ancient caves in Turkey, the Ayvani Cave is Bursa’s hidden natural jewels. Situated at a distance of 2 km south from Uluabat lake which is not far from the town of Mustafakemalpasa. This natural cave was explored around the year of 1970 and opened for public in 1970. This cave is not just one of the gems of Turkey, but it is also the longest cave which has a length of 5 Kms.

Resting at the KizilElma quarter of Ayici village of Gelik district, this natural cave stands as one of the most famous caves in Turkey. The visitors can easily reach this place taking a car. For the people who love to explore the depths of nature, this is the perfect place to be visited. There is the water of Aydin Creek ve Buyuk Ay Creek drips within the walls of the cave. The entrance of the cave passes through a fossil inlet which is situated at the upper part. Likewise, the cave continues horizontally along the water. The total length of the underground cave is 10 Kms and once it was considered the longest cave system. There are also siphons, lakes and areas of crippling which can get quite dangerous during the rainy periods.

The Yanasu cave is another on the list of best caves in Turkey. This cave consists of two caves which were formed in different geological ages. There is a collapsed hall located at the entrance which is also the main gallery and considered one of the most active parts. There are various lakes and ponds located inside the cave and surrounded by dripstones, stalactites and stalagmites. The cave is stretched across at a distance of 1.620 m (5,130 ft). This cave was opened in 2015 by the Deputy Director Of Culture And Tourism in Kirklareli.

Situated at a distance of 1 Km from the Hamiliye village, the Oylat cave is one of the fascinating caves in Turkey which branches with the Oylat Thermal spring resort. The entire length of the cave is 665 meters and consists of two main sections. As one will step inside, there are narrow galleries at the entrance and alongside that, there are cauldrons and damlatas pools inside the cave. The front side of the cave has a temperature of 29-degree celsius which decreases to 19-degree celsius at the entrance.

Further Read: Turkey In November: Take A Quick Rundown At This Guide For An Enthralling Vacation!

Are you one of those adventure junkies who want to explore these natural caves in Turkey? If yes, then these are some of the handpicked locations where you should go and check out the depth of these natural openings and tick off one of the activity from your bucket list. So don’t wait and plan your exciting holiday in Turkey and enjoy a different kind of vacation which will be filled with exploration and surprises.

Which are the best places to visit in Turkey?

Some of the best places to visit in Turkey are:
1. Patara
2. Cappadocia
3. Mount Nemrut
4. Istanbul
5. Aladağlar National Park

Which is the best time to visit caves in Turkey?

The best time to visit caves in Turkey is during the dry months of April to June and September to October as during these months there is very little chances of rain, and the warm days and cool nights makes an ideal weather to explore the terrain of Turkey.

How many caves are there in Turkey?

With the suitable geological conditions, there are around 40,000 caves and caverns situated in Turkey. These caves have underground lakes, cisterns, stalactites and stalagmites inside them. This place is a true paradise for people who want to indulge in potholing and spelunking.

Is Cappadocia a desert?

Cappadocia is actually a rocky desert that covers a vast area of the steppe, located at Central Anatolia which is a historic region in Turkey.

Which is the oldest cave in Turkey?

Derinkuyu cave city in Cappadocia is believed to be one of the oldest caves in Turkey and archeologists believe that it may be from 7th or 8th century B.C.

How deep is the Altinbesik Cave?

How old is the Oylat Cave (Bursa) cave?

One of the oldest cave in Turkey, the Oylat Cave is at least 3 million years old. This 93 meters high and 730 meters long cave is known for its healing effect and is known to cure asthma and bronchitis.

How old are the caves in Cappadocia, Turkey?

Cappadocia is a unique city of Turkey where houses and dovecotes are made of stone and have been carved into caves. These stones are at least 60 million years old and are a result of a gradual erosion of soft layers of lava and ashes.