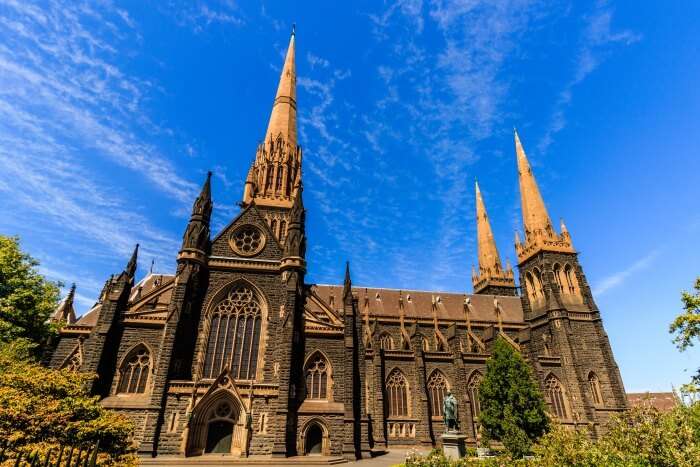 Melbourne is quite a significant and second most populated city in the state of Victoria, Australia. The culture and lifestyle of Melbourne have been lauded and equally promoted in other countries as well. This is the exact reason why Melbourne is referred to as Australia’s heart of culture. The churches in Melbourne are culturally rich where you can make a visit to get some knowledge about the traditions of this place.

It so happens at times that we don’t have much knowledge about the significance of the place we are visiting. However, through this list of prominent churches in Melbourne that we have curated, you will find all the information you need to know before you step inside these churches.

It is also one of the busiest ones in entire Australia. This church is dedicated to St Francis’ of Assisi. The building is so well maintained that you will not believe how old the church is. It has beautiful finishing throughout.

Must Read: Casinos In Melbourne: 4 Game Houses To Set The Dice Rolling In Australia

This is another church which is quite popular among the people of Melbourne. Songs are played here using modern instruments. This is why it has received a lot of recognition around the town.

It is even a great place to make new friends. It is a modern take on the concept of churches and is said to have been enlightening people in a more engaging manner. Visit this church to be a part of eventful gatherings – something that you can add in your memories!

During the time of its construction, it was considered the most beautiful building in Australia. The service here is held every Sunday while the Communion is held on the first Sunday of every season.

This Anglican Diocese of Melbourne is a metropolitan diocese of the Province of Victoria. This Church is quite beautiful and definitely worth a visit. This church is renowned for its long historical journey that ranges from baptism to marriages.

There are various sections where this church is considered to be functional, including chaplaincy, multicultural ministry, children and family, aid and mission agencies, and theological education.

INchurch is a smaller church when compared to the other churches in Melbourne but it is growing at a steady pace. The pastors of INchurch can be seen getting involved in a lot of social work. IN stands for Imagine Nations and the church is based on the belief that Jesus Christ is hope of all the nations.

The church is said to have touched the lives of many in an extremely positive way globally. There are various events that keep happening here, which one must be a witness to!

Suggested Read: 7 Best Hot Springs In Melbourne To Pamper Yourself On A Thrilling Vacation!

The Wesley Uniting Church is designed in Gothic style and looks mesmerizing. The entire structure of the Church takes the form of a cross. There is a statue of John Wesley at the entrance of the church. This Christ-based church is believed to be focusing on influencing and empowering the world.

You can visit here with your family to understand its significance on a global platform and not just in Melbourne.

The church is not as large or popular as the other churches of Melbourne but is still worth a visit. The entire architecture has been done with red bricks. Due to the red bricks, it gives a very beautiful and antique look to the church.

Like other churches, Holy Trinity is renowned for its significant history reflective of God’s hospitality that touches the life of many. The church is known to be a part of Christian community which is dynamic in nature.

Suggested Read: 5 Best Guest Houses In Melbourne To Stay At Ease On Your Next Thrilling Aussie Vacay!

The St. Michael’s Uniting Church is a magnificent historical church which is aimed at offering clear and contemporary teachings or understandings of the Christian values. The interiors of the church are arranged beautifully that would even remind you of a theatre.

Known for organizing various events, St. Michael’s Church gives a platform to the masses to engage themselves in the pathways of well-being as well as enlightenment. Don’t forget to attend the Sunday meetings here, as they’re considered to represent an amalgamation of traditional and modern values.

The St. Patrick’s Cathedral is a beautiful church which is located at the edge of the city. The construction and the architecture of the place are done in gothic European style. One can feel the calmness and serenity while visiting the place.

The place is also popular for the bells it has. Instead of ringing clock wise, they ring anti-clockwise.

The Lifehouse Church is famous for the great service it provides. The choir and music of the place are said to be quite nice. If you want a friendly, welcoming, and a calm atmosphere, then you should definitely go to Lifehouse Church.

The church has been established in order to convey the message of God based on redemption and hope. The doors of this church is open for people from all walks of life so that each can receive the warm love of Jesus! The interiors of church are awe-striking, making it worth your visit!

11. Church of Scientology Of Melbourne

Scientology is a different brand of belief. People who are believers of Scientology understand that a human is immortal and spiritual being that is only residing in a physical body. This church is essentially for those who believe in and are followers of Scientology.

The church prides itself in organizing various social programs that create awareness about anti-drugs, scholastics, human rights, etc. Founded in 1955, it is the oldest Scientology church of Australia and first one to be established in Southern Hemisphere.

The Life Church in Melbourne is popular for its music and some activities for kids. The church gives a platform to people for socializing on a large scale. The church is open all those who want to discover and receive the love of God and establish a precious relationship with Him.

People come here to shape their lives to face challenges without shaking their belief system. Visit this church to understand the cultural significance of Melbourne.

The CrossCulture church is a very welcoming church for all its visitors. There is a bible reading session conducted from time to time. The place also organizes classes for English to help the newcomers get a grasp of this language. The Church even has a youth group.

There’s free coffee available in this church and there are no restrictions on clothes; so you can wear whatever you want! It also ensures a great environment for children of all ages.

The churches in Melbourne mentioned above are unique and beautiful in their own way. Some are of historic importance, while the others are relatively new. As you plan your trip to Melbourne, make sure you add these churches in your travel plan.

What are some of the most famous churches in Melbourne?

Even though people from different religions constitute Melbourne, there is a strong Christian influence out there that cannot be denied. Some of the famous churches located there are Saint Francis’s Church, Scots’ Church, Anglican Diocese of Melbourne, Wesley Uniting Church, and many more.

What are some of the catholic churches in Melbourne?

There are several Catholic churches in Melbourne that are quite popular all around the world. Some of them are Saint Francis’s Church, St. Patrick’s Cathedral, and many more.

What are the famous Presbyterian churches in Melbourne?

Melbourne has several Presbyterian churches that are quite popular among the people over there. Some of them are Scots’ Church, Hesley Uniting Church, St. Michael’s Uniting Church, and many more.

What are the most famous historical churches in Melbourne?

There are some churches in Melbourne that hold strong significance in Melbourne’s history. Some of the historically significant churches located in Melbourne are Saint Francis’s Church, Anglican Diocese of Melbourne, St. Patrick’s Cathedral, and many more.

What is the most famous Scientology church in Melbourne?

The Church of Scientology of Melbourne is quite famous in the world for being a Scientology church.

When is the best time to visit Melbourne?

Melbourne has fantastic weather all year round. But the right time to go there is between March to May or September to October. You will be able to explore the place quite comfortably.

How many days are enough to explore Melbourne?

You can explore the entirety of Melbourne within for days. If you do not have much time, you can even cover the place within two days. It entirely depends upon how many places you are going to cover.