New Year Party In Melbourne: Head To Australia For A Celebration Like Never Before! 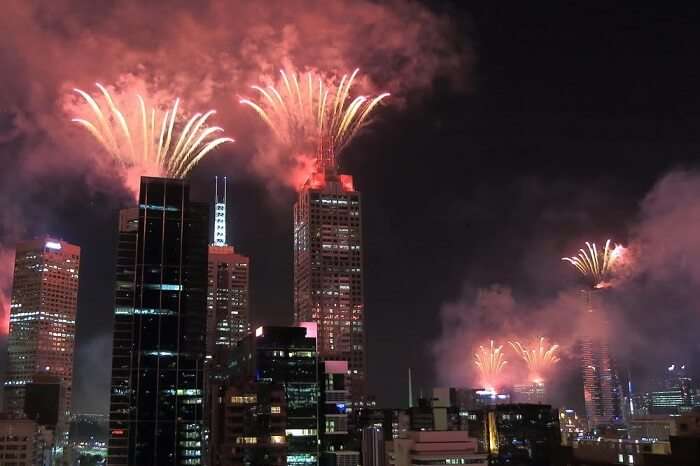 If you are heading down under to bid adieu to the ending year, then you should really be excited for new year party in Melbourne because it is dope! Melbourne is one of the best cities in Australia and also in the world.
It ranks as one of the best cities in the world in terms of livability index. Melbourne is the capital city of Victoria which is a state in the southeastern region of Australia with a population of more than five million people. Melbourne has some of the best restaurants and hotels in the world. Melbourne is a perfect place for New Year’s Eve celebrations.
This is because December–January is summer months in Melbourne and there is a great party environment in the city. This is a very happening city with a diverse population and an entertaining atmosphere especially during the summer months and during the New Year’s.

As Melbourne is a diverse city, Chinese New Year celebration in Melbourne which happens generally around February is also celebrated with a lot of enthusiasm in the city. The following are some ways to celebrate New Year’s in Melbourne.

The firework displays are on top of high rise buildings in the CBD area of the city and can be viewed from different areas in the city. The best places to enjoy the party and view the splendid fireworks display are at Yarra Park, Flag Staff Garden, Treasury Gardens, Docklands and Kings Domain. Festivities begin early in the night and these fireworks are enjoyed by locals and tourists in Melbourne. The fireworks make the New Year celebration in Melbourne inclusive and enjoyable for all people in the city.

Suggested Read: 10 Things To Do In Melbourne In Winter For A Perfect Oz Vacay

Usually, there are many parties in the city which follow a particular theme. These include Masquerade parties, casual Bonfire parties at the beach and even Costume parties. Casino parties on Cruises and the great Gatsby theme 1920s style theme parties are very popular in Melbourne. There are many parties in Melbourne, for New Year that has themes like glitter, around the world, Hollywood and theme parties that celebrate a particular decade in history which are also popular.

The best New Year Eve party in Melbourne is watching fireworks display in the city. The New Years Eve party at Trinket is a great party to attend at this great bar in the city. The NYE Night Garden festival at Hopscotch and party at Garden State Hotel are both fabulous parties in the city. Promiseland New Tear Eves party is one of the biggest events in Melbourne for New Years. Hotels like Hotel Esplanade, The Wharf Hotel and the Amora Hotel all have great parties with entertainment, good drinks, and great food. Robarta’s NYE Jungle parties are famous in Melbourne and are great parties where there is alot of entertainment, music where people can dance the night away at such parties. Bars like P.J.O’brien’s Irish Club, Hophaus Bier Grill, Pilgrim Bar and Ludlows all have excellent parties for the New Years.

Suggested Read: 10 Museums In Melbourne That’ll Walk You From Antiquity To Modernity

There is live music, complimentary drinks, and an extended menu and some restaurants even have a dance floor for the customers to enjoy a great New Year’s party dance at these restaurants. The per capita income in this city is relatively high in comparison to many other places and cities in the world. This city hosts some of the best New Years parties in the world as locals and tourists have the spending power to enjoy a great party.

Suggested Read: 10 Restaurants In Melbourne That Are A Hit With The Tourists

If you’re in Melbourne for a new year celebration, then you’re surely in for a treat at this white themed party at European Bier Café & Aer Rooftop Bar. Well, a food and drink package for 7 hours will keep you more than occupied here! While you may be in mood for a decent crowd, stay assured that this party will have it all, with amazing music playing all through the three levels along with their rooftop space! That’s right! Saying ‘hello’ to New Year’s can be done in style in Melbourne with this venue!

Price: 150 Australian Dollars, Early birds get a discount of 10 dollars only till 14 Dec

With an all-inclusive package for drinks and food which includes burgers, hot dogs and ice cream amongst other things for a duration of 4 hours, you cannot go wrong with this place. The Wharf Hotel in Melbourne will surely woo your senses with the mesmerizing views of river Yarra offering both an indoor as well as an outdoor event at this site! While you’re out and about in this scenic property, don’t forget to check out their pop up beach bar which is simply irresistible for all party-freaks!

With two packages, namely the parlour package and the VIP hidden garnet den package, you can have all you want at this charming venue! Champagne on arrival and quick bites to accompany your palate with wine, what more can you possibly want from an exclusive package like their VIP one! So, while you’re headed to this gorgeous Australian land and thinking about where to head to, this place won’t disappoint you with their DJ playing the latest hits all night long! Are you ready?

Looking for an exclusive VIP cocktail event in Melbourne for New Year’s eve? Well, your search comes to an end with this one! Young and Jackson know exactly how to liven up the vibes for you. With live music playing at this venue, you can choose from a variety of packages to suit your budget or to simply have an amazing time with the Set Menu package they offer. A complete package like this one surely comes with awesome views of the fireworks! So why wait anymore? Get to booking as there are only limited passes available here!

While there can be no better way to celebrate New Year’s than to dance your night away in an open garden to give the perfect feels with your friends and family, this place ensures you have different genres for all your moods for the occasion! That’s right! Soothing R&B playing in the Garden hill and House or Dance music in the observatory, you’re spoilt for choice! While you make up your mind about which package to choose from, don’t forget to check out their Disco themed music in the Rose Garden of this site! Kudos fellas!

Further Read: Summer In Melbourne: 10 Best Experiences For Having The Ultimate Fun In The Sun

Melbourne is a modern city with great infrastructure. Melbourne tourism promotes tourism at this time of the year and Melbourne welcomes tourists from all over the world during this party season in the city. Plan a trip to Australia for Melbourne is a remarkable city where the New Year’s is truly a special time for the locals and tourists visiting the city.

Where are New Year’s fireworks in Melbourne?

What time do the fireworks start in Melbourne?

Where can I celebrate New Year’s Eve in Melbourne?

Where to eat on New Year’s Eve in Melbourne?

The Grain Store, Supper Inn Table, Vue De Monde, Chin Chin, and Butchers Diner are some of the best places to eat at that are open on New Year’s Eve as well.

Which are the best dance parties for New Year in Melbourne?

Which are the bars to visit on New Year’s Eve in Melbourne?

You can visit bars like P.J.O’brien’s Irish Club, Hophaus Bier Grill, Pilgrim Bar, and Ludlows on New Year’s Eve in Melbourne since these will offer excellent NYE parties as well as great cocktails and mocktails on that day.

Sydney Opera House: A Mini Guide To Traverse Through The Most Iconic Place In Sydney!

5 Best Melbourne Road Trips For An Ultimate Holiday Experience Amid The Scenic Views!