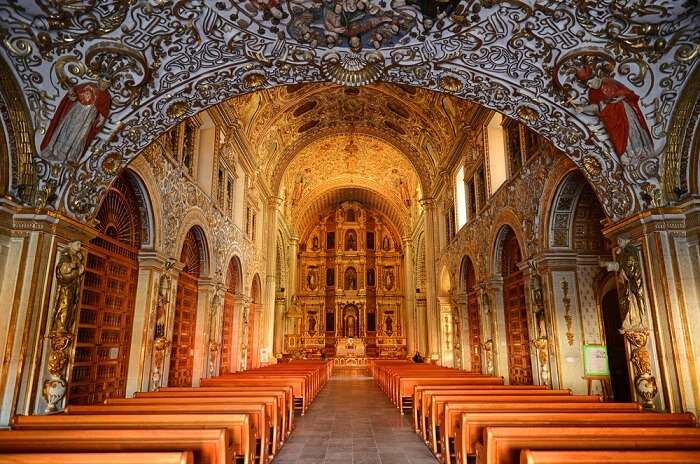 The country Mexico is not only known for its exquisite tourist places and white sandstone beaches but also for its rich culture. Mexicans are very religious people which is why you will find a number of catholic churches in Mexico. These alluring temples of great architecture store the complex history of the nation. Even if you are not religious enough, you must visit these places for the love of architecture and aesthetics.

Here are a few of the most beautiful churches in Mexico that will leave awestruck with their glorious architecture and history. 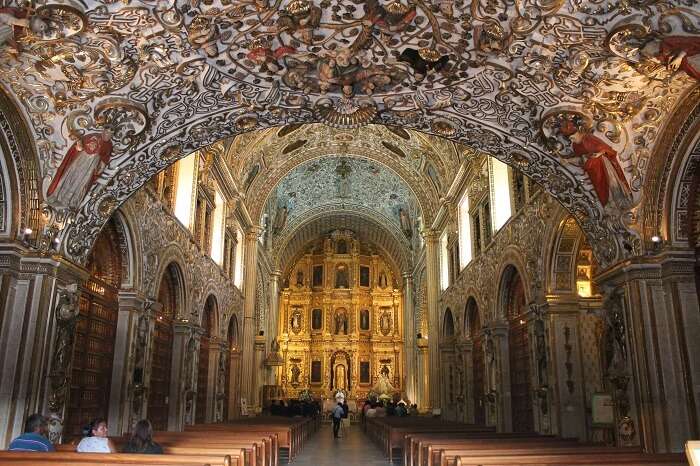 Situated at the end of Oaxaca’s most central and well-trodden non-vehicular avenues, Templo de Santo Domingo is an example of fine Baroque architecture. Its edifice is often called as the icon of entire Mexico. In the past, this Mexico cathedral was a monastery which got converted into a well-curated museum. This place attracts a thousands of people almost every day. Many people come to this place to worship Jesus. This Mexican church is highly known for its decorated interiors and we are sure that once in your lifetime you should come here to attain peace.

Iglesia de Santa Maria Tonantzintla is one of the grandly admired Mexican church because of its magnificent regionalism. The most adept thing about this famous church in Mexico is the elegant composition of Baroque with native motifs and decoration along with some eye-catchy tiling on the external walls. Moreover, Cholula is known for having several amount of churches which were built many great architects. Often described as the indigenous masterpiece of Cholula city, this church is believed to offer salvation to all the troubled people. 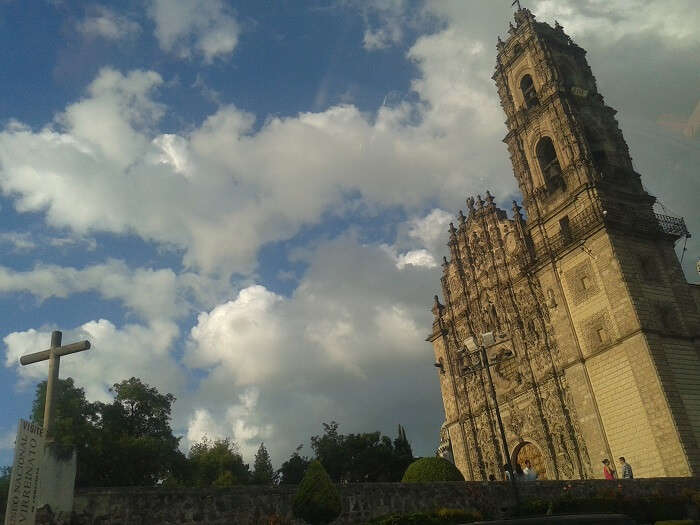 Also known as Estado de México, México State’s Tepotzotlán is a perfect example of Baroque Churrigueresque architecture which will surely grab your eyeballs. It is known for austere touch due to its grey stone walls which is hidden within 10 resplendent golden altar pieces. Yet, it is one of the most beautiful churches in Mexico. It is also considered as a selection of massive, signed Miguel Cabrera murals.

Suggested Read: 9 Best Places To Visit In Mexico In 2022 For A Soul-Satisfying Holiday With Your Loved Ones! 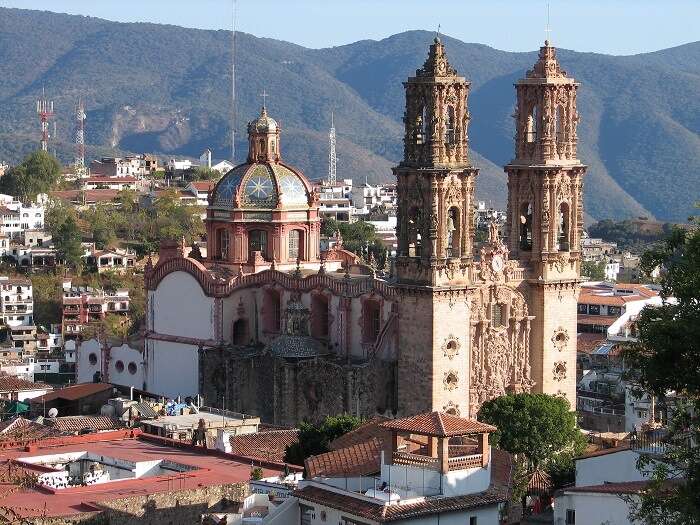 Santa Prisca de Taxco is acknowledged as one of the country’s most spectacular and emblematic Mexican churches. Situated in the colonial Guerrero town of Taxco, it is regarded as the only state pieces of Baroque architecture. Many archaeologists have concluded that this church was officially titled as Parroquia de Santa Prisca y San Sebastián, Santa Prisca de Taxco in 18th-century. The former tallest building in Mexico is the most striking place to look for its architecture.

Suggested Read: Mayan Ruins In Mexico: A Guide To Explore The Ancient Wonders Of The Glorious Civilization 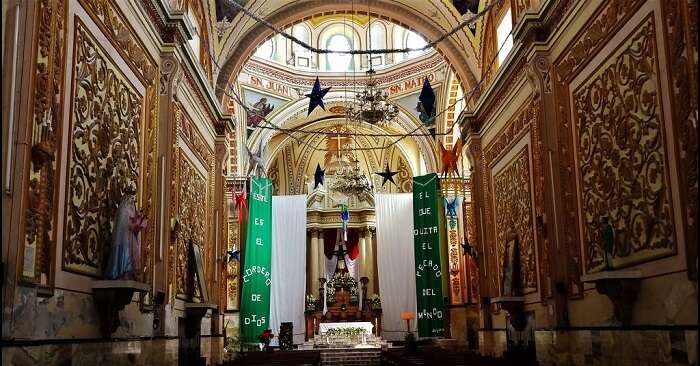 Parroquia de la Santa Cruz is often recognized for its vibrant exterior walls which are beautifully adorned. You will get an impressive image of this church because of its colorful blue and yellow tiled dome. Moreover, its interior décor is quite striking like its offerings. Located in the city of Puebla, this small sized sacred church is recognized for its purity in healing the internal mind conflicts of the sufferers.

Suggested Read: 10 Chic Cafes In Mexico Where You’ll Fall In Love With The Food & Decor

The most deeply visited Catholic Church Basilica de Nuestra Señora de Guadalupe attracts thousands of onlookers, tourists, and spiritual devotees annually. It is said that the modern Basilica is the center of attraction of many tourists whereas the old basilica is the most attractive edifice. With the aid of Mexico’s government, the old basilica which was about to turn into ruins is on the verge of renovation and has been open to the people once again. It is the most famous church in Mexico.

The church Templo Expiatorio del Santísimo Sacramento of the Guadalajara represents the western state of Jalisco and is in the list of the most alluring churches in Guadalajara Mexico. The most unique thing to notice about is its Neo-Gothic architecture which is quietly different from the architectural style of all the Mexican churches in the city. It is adorned with huge granadilla wood doors and consists of stained-glass windows. The special thing about this church is that its clock is imported from Germany and whenever it plays music, the small figures of 12 apostles rotate in and out of the tower.

Further Read: Abide By These 10 Mexico Travel Tips For A Hassle Free Vacation

Not only one city but almost all the cities in Mexico are occupied with some of the magnificent and centuries-old churches which can make you feel awestruck. Make sure you visit all these churches in Mexico next time you are on a holiday in North America. 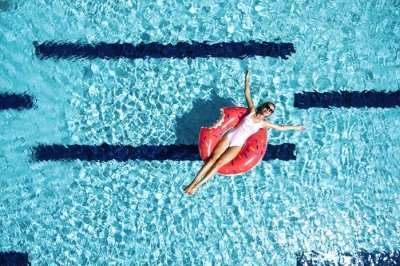 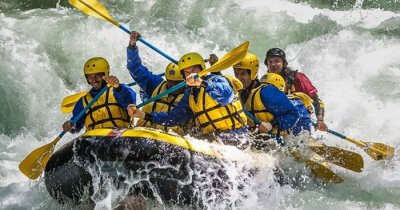 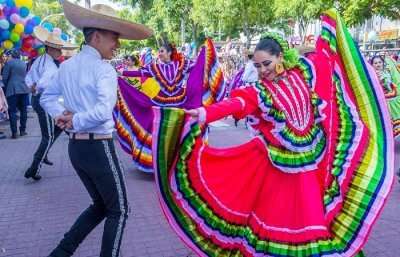