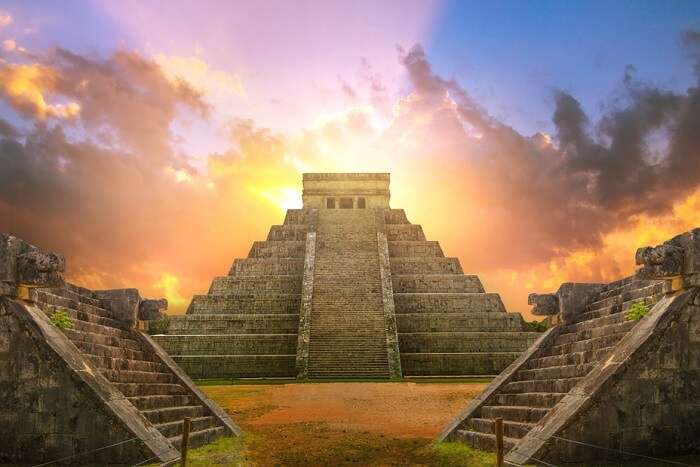 Situated 200 kilometers west of Cancún, Chichen Itza is one of Mexico’s best-preserved archaeological sites. Itza is the name of the ethnic-lineage community which ruled the northern peninsula of Mexico before the Spanish Conquest. The name Chichen Itza implies “at the edge of Itza’s well”. Every year about 1.2 million individuals visit the ruins of Chichen Itza. Chichen Itza is an archeological site rich in history as well as different designs and styles that are typical of central Mexican, Chenes, and Puuc styles. The pyramid structure is extraordinary for its design as well as for its calendar formation. It is to some degree a mystery how a shadow drops upon the pyramid two times a year framing the snake shape.

The pre-Columbian Maya Civilization raised it between the ninth and twelfth centuries. They utilized it as an observatory to display astronomical phenomena. It is a superimposed development being constructed on another. From the highest point of the building, they could see the sky over the vegetation with no restraint. The majority of sites at Chichen Itza are associated with strange sounds. When you clap once at one end of the Ball Court, it plays nine echoes in the center of the court. Also, clapping at the front of the Kukulkan Pyramid produces an echo matching the bird’s chirp.

8 Places To Visit Near Chichen Itza

The blend of scale monuments and the enigmatic accurate astronomical calculation in the constructions make Chichen Itza really a marvelous place to visit. Here are 8 sites you must visit while your trip to Chichen Itza:

1. The Chacmools Of The Northern Ruins

Here you will be amazed by the statues of leaning figures holding divine vessels with their heads swung to the other side that act as temple watchmen. Other eminent Toltec statues are Los Atlantes, stone engraving of knights supporting the site’s sanctuary altars and rooftops. You’ll additionally observe numerous references to the plumed serpent, Kukulkán, alongside pictures of forfeits and battles.

Must Read: 10 Thrilling Treks In Mexico That Are Perfect For An Adventuresome Trip!

2. Temple Of The Skulls

To one side of the ball court, is Tzompantli – the Temple of the Skulls. The term is Mayan but clearly acquires from the post-Classic urban areas of central Mexico. See the rows of skulls etched into the stone platform here. When a sacrificial individual’s head was split off, it was speared on a post and showed with others in an orderly line.

Suggested Read: 17 Best Things To Do In Mexico For A Memorable Holiday

The Pyramid of Kukulcan otherwise called El Castillo was established over a preexisting sanctuary somewhere in the 800 and 900 AD. It is the highest pyramid in Chichen Itza. Mathematically and splendid crafty design mixed with the natural rotation of the Earth makes an astonishing and fairly shocking picture of a goliath snake slithering down the temple. For five hours a light and shadow illusion make seven triangles at the sides of the staircase beginning at the top and crawling its way down until the point when it interfaces the top stage with the enormous stone head of the feathered snake at the base.

When you stand on the foot of the stairs at a specific spot and clap the sound goes up and through its chamber at the highest point of the temple and returns a tone that is intended to be the sound of the Quetzal winged bird. You can likewise observe light and sounds show here at 7 pm in the winter season and 8 pm in the summer season. Also, each equinox this Mayan pyramid arranges a scary ancient light show.

Suggested Read: Winter In Mexico: For An Extravagant Holiday In The Topmost Diverse Country Of The World

The divine cenote is a sinkhole which is associated with Chichen Itza, USA by a raised track. There is also a second karst cave in the core of Chichen Itza that was utilized as a wellspring of water for the residents of Chichen Itza. The utilization of the Sacred Cenote was only ceremonial. Throughout the years, the murky water has yielded numerous antiques including gold, copper, jade, turquoise, copal, obsidian, or incense, rubber, pottery, shells and the bones of around 200 individuals who were submitted in as a sacrifice.

Believed by archeologists to have been a royal palace for Maya authority, the Nunnery or so-called Edificio de las Monjas, with its horde rooms, look like a European nunnery to the conquistadors, henceforth got this name for the building. The building’s measurements are commanding: its bottom is 60m long, 30m broad and 20m high. The development is Maya instead of Toltec, even though a Toltec conciliatory stone stands in the foreground. A little bordering building at the east, known as La Iglesia, i.e. the Church, is capped primarily with carvings.

The Ball Court at Chichen Itza might have once been the central point of social life in the Mayan city. The Ball Court used to be the place where the Mayans would play their adaptation of a ball game called Pitz. An in-depth investigation of all the intricate etchings gives some sign of how it may have seemed in the entirety of its former magnificence.
Maximum historians on exploring the tales portrayed on the sides of the Ball Court in inscriptions have described that the captain of the losing team was sacrificed here to the Gods for the loss of his team. Others believe that perhaps hostages would regularly be sacrificed in the captain’s place.

7. The Hall Of The Thousand Columns

Adjacent to the Temple of the Warriors on its south side is the Hall of the Thousand Columns or Grupo de las Mil Columnas, supposed to have been treated as a place of get together or indoor market. Close-by you can also see other attractions like a little ball court namely Juego de Pelota, the Mercado, and a steam bath.

Suggested Read: 8 Enchanting Hot Springs In Mexico For The Seekers Of Tranquility!

8. Tomb Of The High Priest

Also called Tumba del Gran Sacerdote, the Tomb of the High Priest presents the influences of both Toltec and Puuc. The 9m (30-ft.) pyramid, with stairways on both the sides delineating feathered snakes, looks somewhat like El Castillo. Underneath its establishment is an ossuary (a public graveyard) in a natural limestone cavern, where offerings and skeletons have been found.

How to Reach Chichen Itza

From Cancun, you can easily get a bus to Chichen Itza. An alternate route is to drive towards the west on Highway 180. You must take assistance from the hotel management staff to know the directions because of regular changes in Mexican roads. The ride to Chichen Itza is long but full of scenic sights. You will thoroughly enjoy your ride.

Further Read: Mexico Travel Guide: Know Where To Go And What To Do On Your Next Visit!

Only ruins are left of Chichen Itza, one of the most prominent wonders of the world at one time. The old city used to be an assortment of impressive stepped pyramids, stone structures, columned arcades, and temples. A few hours are enough to see the whole site on your trip to USA. Also, one must hire a guide when visiting this site as it will be rewarding to explore and be clarified in-detail about the importance of each structure during your sightseeing tour.

7 Best Zoos In Mexico Which Will Be A Great Place For A Playful Day With Kids!

10 Best Solo Trips To Mexico To Collect Memories For Life!

9 Best Mexican Desserts That Are Amazingly Delicious To Lift Up Your Spirits!

10 Best Casinos In Mexico For A Vacation Filled With Fun & Entertainment!