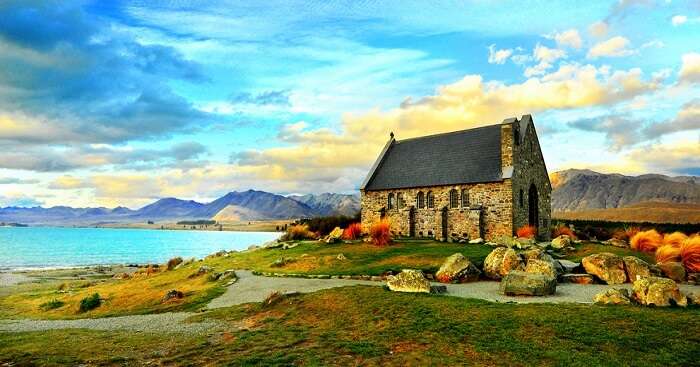 From the smallest towns like Wanaka located on the south island to the largest city, Auckland, the churches in New Zealand can be found in the most remote corners, including the island region. Even though the churches in New Zealand aren’t older than 200 years ago, they’re still admired for the striking work of architecture, be it due to the colonialrule or the aftermath of a natural disaster. Some of these churches situated adjacent to lakes, overlooking the snow capped peaks of the mountains will truly make your visit memorable.

So, don’t think of these as any ordinary places to see in New Zealand because we can vouch they aren’t!

10 Best Churches In New Zealand That You Must Visit

This list of churches in New Zealand will surely take you for a tour within. Much famed for their architectural beauty and spectacular views, these churches have more to them than what meets the eye. Scroll down to know how!

Must Read: 6 New Zealand Resorts That Are Beyond Luxurious, Yet Light On Pocket!

Dating back to 1856, this church was built on the land bought by Father Antoine Garin with only 35 pounds! Later classified as a Category A Historic Building, this church was renovated in 2000 and the mountains in the background offer the perfect sublime atmosphere to it. Adding further to its charm is the white color on the outside that goes well with the vibrant surrounding area and makes it one of the best places to be in all of the churches in Nelson, New Zealand.

Listed as a Category 2 Historic place, St. Dunstan’s Church was built in a simple gothic revival style, designed by Francis William Petre who also designed many other churches in New Zealand. This holy church was constructed by Thomas Wilkinson and John Holloway, the local craftsmen. Made with locally quarried stone, this church stands strong till date since 1903, despite of the fact that the country has been affected with some major earthquake activities in the past.

Suggested Read: Top 10 Cool Festivals in New Zealand To Make Your Tour A Celebration In 2022

Located in Otaki, this church is the oldest Anglican church in New Zealand. Originally built in 1851 and later burnt down by the arsonists in 1995, it was rebuilt in 2003. The design of this church has been inspired by English and Māori church design which makes it unique. It’s a must visit if you wish to witness the fine architectural work involved in its making.

Much popular for its style of architecture, St. Patrick’s Basilica or Oamaru Basilica was designed by Francis Petre and is considered to be one of his most celebrated works.Basilica’s classical portico and three domes stand in all their glory in the Oamaru townscape and is particularly praised for the high quality of stone carving and fine plasterwork.

A typical example of the rural New Zealand churches back in 1875, this one was originally built as a chapel for a farm and its workers, and is beautifully preserved till date. The bright pink on the top adds to the scenic view of the church and also resembles the estate churches in England.

Also known as St. Patrick Cathedral, this catholic church in New Zealand is located on the site originally granted by the Crown to Jean Baptiste Pompallier in the early 1840s. Receiving several modifications through the years, has an appearance similar to other churches designed by Walter Robinson. It has also been assigned the status of Category I Heritage and the massive structure offering a seating of about 700 will leave you awestruck for sure!

7. Church of the good shepherd

Suggested Read: 10 Places To Visit In Christchurch For A Terrific New Zealand Vacay

Set amidst the Lake Tekapo and mountains, the church of the good shepherd offers a calm and soothing vibe to all. Over the years, it has become a favourite tourist stop and also has night sky tours as the Milky Way galaxy displays a mindblowing backdrop here at night. This church was built as a memorial for the founders of the mackenzie region and the builders were specially instructed not to interfere with the natural surroundings of the site on which it stands.

Christ Church in Russell, New Zealand is one of the oldest existing churches which is still used for its original purpose. A digital cemetery walk tour is also available at this site where they take you through the cemetery and share stories of some of the interesting people buried in the graves. The construction of the original church began around 1835 and the latest restoration work was done in the year 2000.

Suggested Read: 19 Adventure Sports In New Zealand That Will Make The Thrillist In You Super Happy In 2022!

This church located in the capital city of New Zealand is one of the greatest heritage sites in the country, dating back to 1860s. An interesting story attached to this church about how it survived demolition in spite of a new St. Paul’s being built a few blocks away, makes it even more tempting for a visit. A famous place for weddings, ceremonies and the like, this one attracts tourists from all over for its timber gothic architecture.

Further Read: New Zealand In December Is Too Much Fun. Pick Your Reasons And Plan A Trip Now!

Located in the heart of the city on Moray Place, the First Church in Otago was designed in 1862 by Robert Lawson. Another church listed as a Category I in Heritage sites of the country, this church has stained glass windows dedicated to those fallen in war and to the Otago Mounted Rifles. A large bell situated outside the church was sent from Scotland in 1851. The inspirational design work used here is a must watch.

Can’t wait to visit these marvelous churches? Plan your trip to New Zealand with TravelTriangle right away to treat your eyes and soul!

How many Christians are in New Zealand?

What religion is practiced in New Zealand?

There are many religions and cultures existing in New Zealand. Before it was Christianity, but now there are more people who identify as no religion than Christianity or any religion. But you have various types like Anglican, Catholic, Presbyterian and others.

What is the oldest church in New Zealand?

There is a church which goes by the name Russel and it was built way back in the 19th century. One of the oldest churches in the whole country.

Is New Zealand a religious country?

New Zealand can be perceived as a country which has multiple beliefs and there is no such thing as one particular religion.

What is the fastest-growing religion in New Zealand?

What is the culture of New Zealand?

Essentially, if you observe, this country follows the western culture and some of it is also influenced by the Maori people too. Again, there is a lot of multi ethnic migration so there isn’t a fixed culture.

How many members of Islam stay in New Zealand?