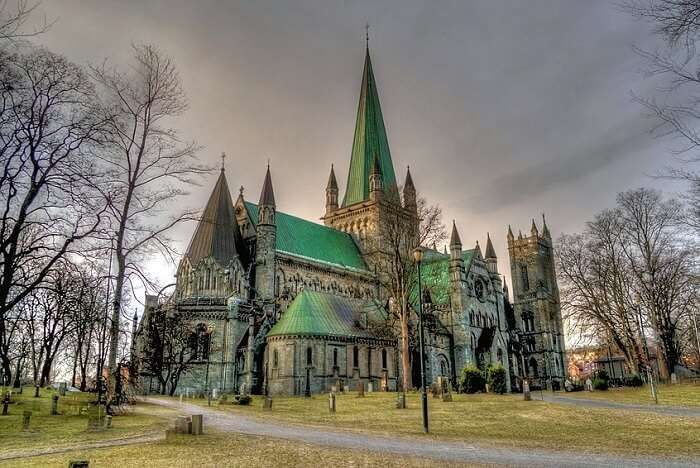 Churches in Norway are incredibly fascinating and wonderful showcase of its beautiful culture and heritage. Most of the churches here will offer an exquisite blend of ancient as well as the modern culture of this beautiful country. Overall Norway is full of dazzling historic monuments many of which will you in their awe. Among such monuments are a good number of its heritage churches, which showcase the spiritual religious ancestry of this place.

We have shortlisted 10 most popular and beautiful churches in Norway that unfold the alluring art and grandiose architecture inheritance of this region, among other things:

Arctic Cathedral was built in the 1960s is a parish church. The church is popular among the tourists for its angelic stunning architecture which resembles the famous opera house of Sydney and has a splendid location with a beautiful mountain in its backdrop. The magnificent architecture of the church with its shining aluminum panel exterior can be seen even from the far off island. It also hosts a beautiful divine glass mosaic in its eastern side. This church for the people of Tomaso is a major place of worship.

Nidaros Cathedral is one of the oldest church in Norway. Construction of the church was started in the eleventh century but it took more than two hundred years to complete it. Historically and since the Roman empire age this church has been a cultural religious center in northern Europe and has been hosting many national and international events around Christianity. It is in the center of this big city of Trondheim and is an easily reachable tourist spot.

Small but an architectural marvel Borgund stave church is an old church which was built between the late twelfth and early thirteenth century. The church is a major tourist spot for its very unique and unexpectedly delicate designs – and sometimes it is also known as a cube of cubes due to its different design. Replica of this church was built in Germany and USA – a sign of its historic popularity among the Christians world over.

A modern Norwegian which is just five years old but even then has become a huge attraction mainly due to its creatively designed fascinating modern architecture. The outside of the church looks like a high profile modern factory but inside is dazzlingly different and beautiful masterpiece. A must visit if you visit anywhere in or around Alta.

Built-in twelfth-century this church in a rural village at Solvorn village is a UNESCO heritage site. Location of the church is alluring with pleasing greenery around and majestic fjord. The church hosts artworks and paintings of Viking age which has attracted historians and archaeologists. More than seven hundred churches and gospel hall in Norway are counted as heritage sites

Suggested Read: 9 Lakes In Norway Worth Exploring On Your Vacation To Europe

The church was built in the late seventeenth century and is one of the most famous cathedrals church here. This famous Cathedral got more popular among visitors after it hosted the marriage of the crown prince Haakon at the beginning of this century. Apart from the royal wedding, the church has been hosting much royal and government supported events. There is also a famous Bazaar in the surroundings of this church which can make your visit here all more exciting.

The church was built in the twelfth century and is among the oldest parish churches world over. This long church has a strong history and heritage attached to it. One of the favorites for archeologists, a few years back some archeologists even found a royal carved letter of love believed to be written by a king to his lover. This extremely long church is an all wood church and beautiful flower sanctuary around it. Church also hosts a small museum showcasing the ancient artworks.

This church is the oldest cathedral church of Norway – built in the early twelfth century. The architecture of the church traveled to many parts of the world to research and build the design for this Cathedral. The church is small but pristine and amazingly peaceful. One can also shop for Norwegian souvenirs and local artworks from the shops around the church.

This cathedral is one the best architectural designed wooden cathedral in Norway. This Cathedral is extremely big and vast and can accommodate more than twelve hundred people inside. The marvelous exterior of this church situated in the village of Kabelvag has a dash of Swiss architecture. Some of the churches in Europe are as old as the tenth or eleventh century, like this one.

This beautiful small 12th-century church is situated in Alesund in the northern part of Norway. This alluring beautiful white church is actually built white marble but the marbles are hidden with the plaster on the inside and white chalk on its exterior. More than two hundred of the churches are specially recognized by the government and are categorized as protected sites.

Further Read: Want To Visit Norway This Winter? This 2021 Guide Will Help You Plan Your Trip Well

Norway has been a host to some of the world’s most alluring churches that are famous for their heritage and architecture. Its churches and cathedrals have also made church tourism big in this country and many people from Europe and the world over visit Norway mainly to visit its splendid churches. Plan a trip to Norway right away to explore these churches.

What is the specialty of the Borgund Stave Church

Borgund Stave Church is the finest standing example of Norwegian stave and lintel construction. This 12C stave church is still in good condition. It is a cultural heritage site in Vestland, Norway.

Which is the best time to visit the churches present in Norway?

There is no special season to visit the churches found in Norway. Yet, the rush will be more during the peak tourist season from June to August. The moderate season is from May to June, and September and October.

Why are there many stave churches in Norway?

Norway is popular for its lumbering since medieval times. Stave type construction is the best for the Norwegian climate. This is why most of the heritage churches are made of wood in Norway.

What are the church timings in Norway?

Can tourists of any religion and ethnicity visit the churches present in Norway?

Yes, Norway follows religious pluralism. Tourists of any religion and ethnicity can visit the churches present in Norway

What is the entry fee to visit a church in Norway?

Most of the churches present in Norway are without an entry fee for the tourists. Yet, a few of the heritage churches with a museum complex charge entry fees from tourists.

Are photography permitted inside the churches of Norway?

Austria In March: A Guide To Know About This Magnificent Country During Spring In 2022!