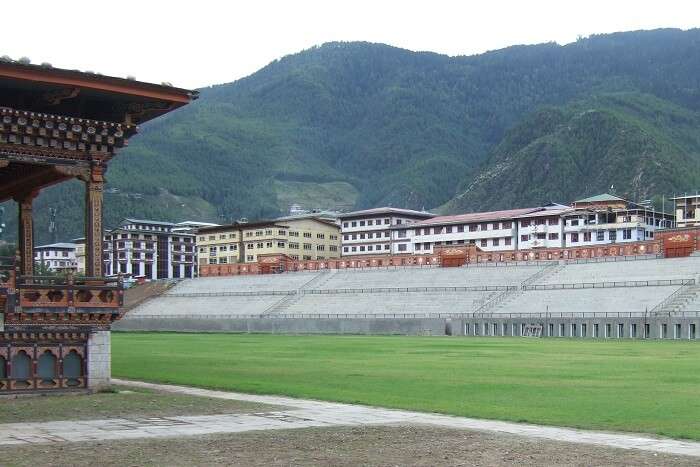 When you’re visiting a new place, it is of utmost importance to visit the historically significant places in order to understand the culture of the place better. The Coronation Park in Bhutan is one such place you wouldn’t want to miss. Situated in the middle of Changlimithang ground and Wangchu River, the Coronation Park of Bhutan is a must-visit place. You might think of it as a usual Park from the way it sounds, but once you actually witness its beauty, you would realize it’s totally worth a trip.

About Coronation Park In Bhutan

King Jigme Singye Wangchuck handed over the kingdom to his son Jigme Khesar Namgyal Wangchuck, for which he stepped down his throne in 2005. The Coronation Park and Centenary, inaugurated by Ashi Chimi Yangzom Wangchuck on 26th September 2006, was built to honor the new king of Bhutan. King Jigme Khesar Namgyal Wangchuck had studied in Britain and various universities in the United States. The inauguration of the Coronation Park in Bhutan also commemorated a century of monarchial rule in Bhutan.

During autumn, the climate is cool and temperate. Even though Bhutan is the most crowded throughout this season, the crisp blue skies are worth undertaking the visit. Moreover, this is the perfect time for traveling and trekking, due to the moderate temperature. You could relax at the Coronation Park in Bhutan after a long tedious trek or just sit and soak in the late-afternoon sun with a cool breeze embracing you. You could also witness a good friendly match of either football or basketball.

Places to Stay In Coronation Park In Bhutan

Image Source
Himalayan Kisa Hotel, Gakyil, Hotel Norbuling, Bhutan Boutique Residency, and Wangchuk Hotel are among the best budget hotels that provide the best facilities within a very feasible price range, ranging from INR 1500/- to INR 3000/-. If you are up for a lavish, luxurious stay, then Taj Tashi, Druk Hotel and Le Meridien Thimphu are some of the best hotels that you might be looking for.

Things To Do In Coronation Park In Bhutan

The Coronation Park in Bhutan is adorned by beautiful canopies and footpaths made of stones. Keeping in mind the interests of children, there are small swings and slides installed in the Park. Here are a few things to do here:

Standing on a lotus, encircled by dragons or druks, this 45 feet statue of walking Buddha is the major attraction of the Park. Reflecting the Bhutanese culture in the best of its glory, this piece of impeccable art looks beautiful as the day sets and the lights turn on. This is not a statue that you would want to just pass by.

Located near Coronation Park, the Clock Tower Square is another vintage location to spend your time at. Many shops and hotels are located around the Clock Tower as it is an important landmark in Thimphu. Depicting typical Bhutanese Architecture, the Clock Tower offers great insights into the culture of Bhutan via paintings and sculptures.

As the fragrance of over sixty species of flowers fills the air, take a walk by the Wangchu River. It offers some great views along with the right amount of solitude. You would want to spend ample amount of time in the company of this river which is a tributary of the Brahmaputra river. Make sure to stop by here.

Once you get to the Coronation Park in Bhutan, the sun won’t seem as beautiful on normal days of your life. Sunsets, as witnessed from the Coronation Park, are beautiful to look at. With a view of the river and almost six acres of lush green canopies and flora, the sunset there would be one of the best ones you would ever experience.

Suggested Read: Top 10 Honeymoon Places In Bhutan To Fall In Love All Over Again!

5. Bhutan: Take A Guided Tour Of The Park

If you want a historical background of the Bhutanese monarchy and culture, you can take a guided tour of the Park. It might last for as long as two hours. During the guided tour, you can learn about the various species of flora and fauna. The Wangchuk River also might have witnessed quite a few important events in the history of Bhutan, which might be worth knowing about. The Coronation Park is full of stories, once you start listening.

Suggested Read: 10 Magnificent Bhutan Rivers To Explore At Least Once In Your Lifetime

This is the National Stadium of the country. It predominantly hosts the football matches but also hosts the archery practices and tournament. Apart from sports, the stadium also hosted the wedding of King Jigme Khesar Namgyel Wangchuck and Jetsun Pema which was a grand event in the history of Bhutan.

How To Reach Coronation Park In Bhutan

The only international airport of Bhutan is located in Paro and is well connected by flights from Kolkata, Delhi, Bangkok, Dhaka, Gaya, Kathmandu, etc. You can reach Thimphu from Paro International Airport via a shared cab or bus.

Further Read: Shopping In Las Vegas: 10 Best Places To Shop Like Never Before

Bhutan in itself is a repository of cultural magnificence. Its rich historical insights are full of stories. The Coronation Park in Bhutan is an amalgamation of serene views and rich historical background. It is an ideal spot for relaxing after a long trek or merely soaking in the sunlight. It is perfect for kids and adults. Make sure to visit the Park on your trip to Bhutan.

These Intimidating Bhutan Mountains Define How Mesmerizing The Himalayas Are

10 Best Places To Visit in Punakha, The Old Capital Of Bhutan

Bhutan In March 2021: All That You Need To Do In The Land Of Thunder Dragons!