Deeg Palace In Rajasthan: An Escape To The Royal Past 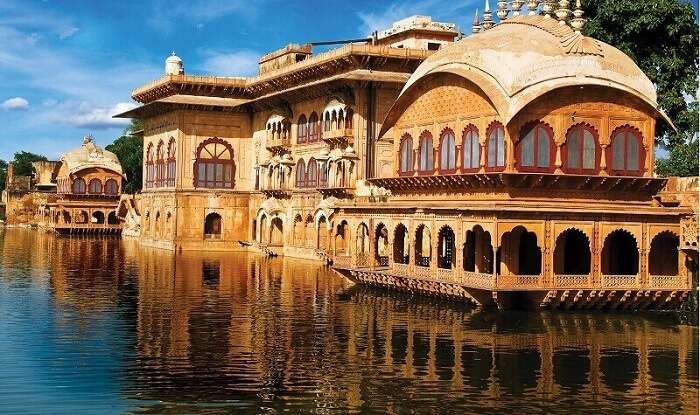 Deeg Palace in Rajasthan is an interesting place for people who want to see the best of Mughal and Rajasthani splendor. A famous weekend spot for travelers from Delhi, Agra, Bharatpur, and the nearby areas, the palace is well known for its beautiful fountains, gardens, grandeur, and of course, its history, which at the very least, is magnificent!

After acquiring the throne, Badan Singh chose Deeg as his stronghold and capital and initiated the construction of the palace around 1730 AD. He became the founder of Jat House in Bharatpur and under him, the place grew prosperous and urbanized. His son, who is often hailed as the hero of the Jat dynasty, Surajmal, later constructed the fort around the palace, which provided protection against outer attacks.

The architecture in Deeg is a fusion of Rajput and Mughal. Attractive halls, arcades, symmetrical outlines, greenery, canals with mountains are some of the best attractions in the Deeg fort and palace. The layout of the gardens is based on the Mughal Char Bagh or four garden pattern with two reservoirs, known as Rup Sagar and Gopal Sagar.

Suggested Read: Embrace The Winter Chill At These 15 Best Places To Visit In Rajasthan In November!

The main entrance to the palace and its complex, Singh Pol is an unfinished structure that looks as if it was constructed in the later period. Named after two lions, the gate has two lions sculpted on the archway.

This is one of the best buildings in Deeg Fort. Its reflection in the surrounding water gives it a shimmering ambience like none other. The Bhawan has two summer resorts on the waterfront and a room in the northern wing which has a black marble throne platform, that is said to be spoils of war brought back from the imperial palaces of Delhi by Jawahar Singh, the successor of Surajmal. Apart from this, the Bhawan also has two small pavilions called Sawan and Bhadon Bhawans in the north and south side respectively. Each pavilion has a two-storeyed structure where only the upper one can be seen. The roof is palanquin shaped giving it a very grand feel.

This one is the most beautiful buildings in the palace complex and was built by Surajmal. It has a verandah with five arched opening and corner rooms on each side. The roof is flat and the whole bhawan is built with buff sandstone on which white marble was encased subsequently. The dados of the central apartment have beautiful pietra dura work bordering.

Situated on the southern side of the palace complex, this is a well-decorated building which has a paneled facade that is broken by five large central archways. There is also a huge fountain feeding tank on its terrace. On the inside, the building has a alcoved balcony with a facade on the back wall.

The Hardev Bhawan lies behind Suraj Bhawan and has a vast garden on the front which is laid out out in Mughal charbagh style. The ground floor of has a projecting central hall and faces a row of double pillars. The read end is crowned by a chhatri with a spiked roof.

Another one of the fascinating bhawans of the Deeg Palace, the Keshav Bhawan is a single storey open pavilion that lies along the Rup Sagar. The bhawan originally had an elaborate device that could reproduce the monsoon effect. The stone balls in the ceiling would be agitated by piped running water to produce the noise of thunder and the water was released through sprouts to fall like rain around the open hall.

Located on the north side of the central garden, this is a large oblong hall that is raised on a terrace and enclosed by a garden of seven openings. The center portion of the ceiling is made of pure wood and just like other buildings, this one also has a tank and beautiful exterior.

Built by Badan Singh, Purana Mahal is planned as a spacious rectangle with an interior consisting of two separate courts. It continues the tradition of a typical palace. It has impressive exterior. The arches are both of engrailed and pointed types.

The royal abodes are planned along the periphery of the central garden and flanked by two reservoirs i.e. the Rup Sagar on the east and the Gopal Sagar on the west.

Summer season is generally harsh with temperature going as high as 50 degrees Celsius. The winter is chilly but comes with pleasant morning and is a good time to visit this destination. However, the exact best time to visit the Deeg Palace would be during the three day fair which is held in September. The fort is decorated in a grand manner the festive spirit is simply contagious.

How To Reach Deeg Palace

Mesmerized by the fantastic Deeg Palace? Witness more past royalty in the state by booking a Rajasthan Tour Package from TravelTriangle

What can I shop near Deeg Palace?

There are numerous interesting and exciting things to check out near Deeg Palace. Shopping in Rajasthan is always considered one of the best things to do here. You can check out the collections of bangles & ornaments, bandhani, footwear, cotton long skirts or Ghaghra, etc.

Where is Deeg Palace located?

Deeg Palace is a beautiful palace that is located near Bharatpur in Rajasthan. The palace was constructed in the year 1772 and its proximity to Bharatpur Rajasthan makes it a popular attraction for locals and travelers.

Why is Deeg Palace important?

Deeg Palace is popular for its amazing fountains that function twice a year on a special occasion. The palace lures history lovers and archaeologists with its water-based unique architecture that sustained life and protected royal families from the scorching heat!

What are the best places to visit near Deeg Palace?

If you are holidaying in Deeg and looking for the best places to visit near Deeg Palace then Bharatpur Sanctuary, Gopal Bhawan, and Suraj Bhavan are a few awesome options.

No, Deeg Palace is not haunted. The palace was constructed in the early 18th century and there have not been any suspicious reports about palace since then.

When was Deeg Palace constructed?

Deeg Palace was constructed in the year 1772 as a luxuriating summer resort by Badan Singh, a popular Jat King of his times. The palace remained active until the 1970s.

What are the best things to do in Deeg?

You can plan a visit to Deeg Palace or take a religious walk covering the entire Govardhan Hill. Planning a visit to Manasi Ganga will make you have perfect family time with your kids. If you are interested in religious excursions then you can visit Daan Ghati, Shri Giriraj Ji Maharaj Temple, and Shyam Kund.

A Comprehensive Post-Covid Travel Guide To Rajasthan: For A Risk-Free Vacation In The Royal Empire