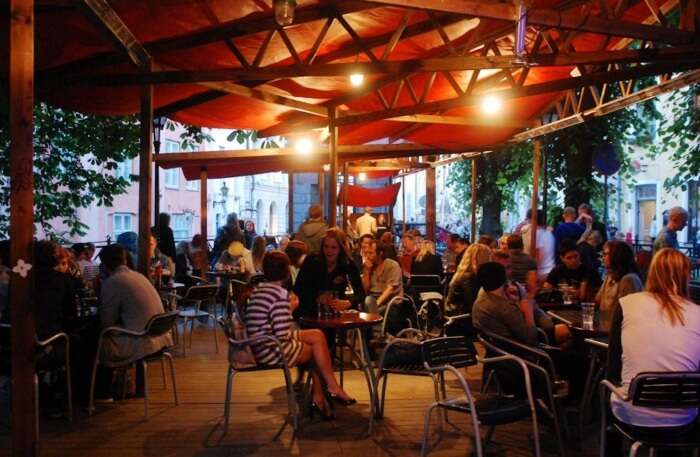 Estonia, a Northern European country, is known for all things good. It is considered as one of the developed countries of the world with a booming economy that is constantly on an upward spiral. The country is also remarkable for the civil liberties it accords to its citizens such as universal health care and free education.

Moreover, Estonia is noteworthy for its rich cultural heritage that has been shaped by centuries of German, Swedish, Danish, Polish and Russian rule. Yet, a distinctive Estonian identity stands out. For instance, the Singing Revolution that started in 1987 as a non-violent resistance to Soviet rule, and ultimately proved successful, is lauded the world over for its uniqueness.

No doubt then, that Estonia attracts a large number of tourists from across the world. Such is the diversity of this land that it has something to offer to every kind of traveller, be it the humble backpacker or the family on a vacation. It is a treasure trove of breathtaking sceneries, austere beaches, age-old castles and churches, and no surprise, a vibrant nightlife that will fade out all your blues. Estonia nightlife is renowned across the globe for its liveliness and culture. Let’s find out why!

Estonia has been consistently ranked as one of the best places in Europe to party the night away. Here is a list of some destinations that will act as an Estonia nightlife guide for you!

Image Source
The capital city of Tallinn is an absolute go-to for its several local pubs in the Old Town area. Of these, Hell Hunt claims to be the first. In fact, it is supposed to be the first Estonian pub ever.

There are all the reasons for this pub to enjoy such a successful run, with a mind-boggling collection of beer to choose from. Its popularity is testified by the countless Estonian youth hanging out on its terrace.

Must Read: 10 Best Places To Visit In Estonia For Seeking The Ultimate Adventure!

Image Source
Illusion is one of the most popular haunts in Tartu, the second biggest city in Estonia. Party lovers who love to dance their hearts out must not miss this place. It is famous for its state-of-the-art sound system and hosts top DJs from across the world.

It is sure to be a favourite for retro music lovers because the club hosts retro nights every Wednesday.

Image Source
Porgu literally translates to ‘hell’ in Estonian. Rightly so, it is as authentically Estonian as it gets. If all the local flavours are what you want to soak up in, head to Porgu for a relaxed drink with friends.
It is also one of the rare places to find Pihtla, a delicious home-brewed beer from a faraway island that tastes different every time. Intrigued much?

Image Source
Genialistide Klubi is one of the oldest nightclubs of Tartu. If a truly local party is what you want to experience, this club is as local as it can get. It is sure to strike a chord with the artsy crowd who believe in old world charms and bohemia.

Despite this, Genialistide Klubi hosts the most fun parties in Tartu. The range of events up here is exhaustive, from electronic music to underground cinema!

Image Source
Drink ensures you a happening night out with its comedy shows and fun quizzes. It is the perfect haunt if you are looking to take a break from a boring, monotonous routine.

With its extensive range of both imported and local beer, Drink is sure not to disappoint if the vibrancy of Estonian nightlife is what you want to experience

Maasikas is the best nightclub for the older lot looking for something more sombre. This place sets the tempo right with its retro music. It is also renowned for its tasty cocktails churned out by the best of professional bartenders.

Yet, Maasikas has a crazy dance floor that is sure to keep you going all night long. Indeed veterans vouch for the fact that it is difficult to leave before the morning sets in.

Image Source
Cafe Amigo is the best place to dance the night away. Partying here is a serious business, captured in its ‘Partying is Sacred’ slogan. It hosts live performers from Thursday to Saturday. The rest of the week is to catch up on mainstream Estonian hits.

If you want to feel like a true blue Estonian, head to this place because it attracts milling crowds of locals. Their delicious cocktails are a hit.

Püssirohukelder is the best option for those looking for an alternative to the regular casual nightclub. It is a great place to listen to great live music and also tap your feet to it. Also, because it can accommodate up to 300 people at the same time, Püssirohukelder is one of the more popular places to chill at in Tartu.

Be prepared to get surprised by something new going on every night, be it a live music event or a karaoke night.

Image Source
If you are hunting for the very best of contemporary East European music, do stop by Rock Club Tapper. They host a multitude of bands from across Estonia, as well as Latvia and Finland, known for their great live performances.
The place is especially famous among hard rock enthusiasts. It is highly recommended to checking their website for scheduled concerts.

Image Source
Trepp is undoubtedly the best place for a crazy party. Hands down, it is the best place to get drunk on as many shots as you want as one is spoilt for choice from the hundreds of different shots that are available.
There is the right shot here for everyone. The names are enticing enough to convert the shot non-lovers, such as a ‘Liquid Marijuana’ or a ‘Cherry Kiss.’ The place is also well known for its crazy drinking game wherein one can go berserk ordering random shots.

Image Source
Vabank is the nightclub for you if looking for a more sophisticated and posh atmosphere. It plays host to the parties of the who’s who of Tallinn’s show business. There are separate dance floors to dance to three different types of music- R ‘n’ B, Pop and Disco.

However, entry is allowed to only those above 21. Dress up in your finest and you are all set to roll!

Image Source
As the name suggests, this is one of the places where people enjoy alternative and underground culture. If beer, hard rock, and metal are all you live for, Underground is the best place to be in Tartu. It is also a great place to get friendly with the locals who also love to make new friends and share a similar taste in music!

Image Source
Valli is the only place for you to get Millimallikas, a local drink, according the bar a cult status. On a regular day, it might be even tough getting a seat. The place is so legendary that the locals have carved their names on to their favourite seating spots, which is a local tradition.

The interiors of the bar clearly reflect typical Estonian tastes. To sum it all, you must not miss this!

Suggested Read: This Winter, Escape To The Best Honeymoon Destinations In Europe In Winter 2018!

Image Source
This is another oldie on the Tartu pub scene. If you love your drink while cheering on for your favourite team, Illegard is the sports bar to head to. If you are lucky, you might also catch some local bands playing.
Its big juicy wraps and burgers are to die for and some claim that they are the best that one can find in Tartu. It is a favourite haunt of the creative kinds and is always full mostly with students.

Suggested Read: 17 Fascinating Things To Do In Estonia For An Extraordinary 2021 Trip

Image Source
Vein Ja Vine is the best place to get the Tartu Vibe and start some deep conversations. Although comparatively new on the block, it is a great place to grab some reasonably priced wine and awesome snacks to go with it. They have won a place in Estonian hearts with their warm service.

Any must-do list of Estonia nightlife is incomplete without mention of the Jellyfish, an Estonian drink not for the faint-hearted. Yet, almost all non-Estonians do end up giving it a go at least once. The expected etiquette at pubs and bars is quite simple. Buying people drinks is alright. Tipping the bartender totally depends on you feeling like it. However, be sure not to dismiss the Estonian security men for their small built because they can pack quite a punch. So go “terviseks” (cheers) to great nights in your vacation in Estonia.

Q. What are some of the top places to enjoy the nightlife in Estonia?

A. Estonia boasts some of the hottest places that are perfect for a night out. Some of them are Hell Hunt, Café Amigo, Rock Club Tapper, Trepp and many more.

Q. What are some of the top nightclubs for the older crowd in Estonia?

A. Some places in Estonia are perfect for a night out for the crowds from the older generation including Illusion, Maasikas, Vabank and many more.

Q. What are some of the best nightclubs in Estonia to hang out with friends?

A. Estonia not only has the hottest nightclubs, but it has some places that are not only open during the entirety of the night but are best for hanging out with one’s friends. Some of them are Porgu, Drink, Vein Ja vine and many more.

Q. Which nightclub in Estonia serves the best beer?

A. You will be able to find several clubs that serve premium quality beers to their customers, including Hell Hunt, Porgu, Underground, Valli and many more.

Q. What is the cost of a beer in Estonia?

Q. What is the currency that is used in Estonia?

A. The currency used in Estonia officially is the Euro.

Q. Why is Genialistide Klubi famous?

A. Genialistide Klubi is not only one of the famous clubs in Tartu but the entirety of Estonia as well. The club is known to be hosting the hottest parties of the area.

Q. What is the best place to enjoy the Eastern European bands of Estonia?

A. Rock Club Tapper is the place to go if you want to see shows of famous Eastern European bands in Estonia.

Nightlife In Mumbai: 20 Coolest Experiences That Will Make You Fall In Love With The City In 2021!

Experience Nightlife In Scotland At These 7 Amazing Spots As You Unleash Your Party Animal!

The Ultimate Guide To A Kickass Nightlife In Delhi In 2021

Canberra Nightlife: 10 Places To Celebrate A Unique Experience In Australia