Winter In Estonia: 11 Amazing Places That Will Leave You Awestruck In No Time! 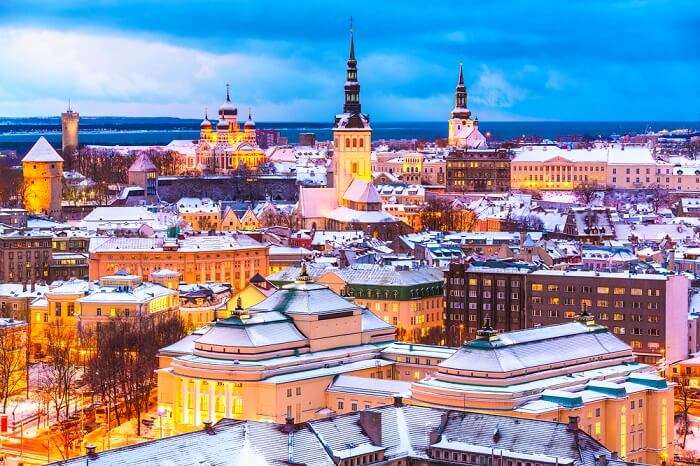 Estonia is a country in Europe you may not have heard about. The country has a huge store of breathtaking natural sceneries and incredible touristy attractions. Inhabited by beaches and lakes, the country boasts alluring castles and old churches! And just imagine how beautiful it would all look with a touch of winter! If you are planning a trip to Europe, spend a winter in Estonia and we can bet you’ll be mesmerized for life!

11 Best Places To Visit In Estonia

If you are just curious about the place, then, here we have a list of places with things to do there as well so that your trip to Estonia is as fun as possible.

The Toompea hill is what that defines the magnificent capital of Estonia. The place soars in a medley of Orthodox onion domes and ancient bulwarks right in between the town. The walled city lies below these sprawls where stony streets and shady alleyways open up in the enthralling market place. The place displays an array of glorious historical monuments with the buzzing collection of beer halls, shops and Estonian eateries. It isn’t surprising that it is one of the Europe’s coveted capitals. The bohemian streets of Kalamaja and the parks and places of Kadriorg district is a must visit as well.

This place is on the Gulf of Riga, Parnu comes with the best stretches of sandy pearl white beaches on the Baltic Sea. The promenade is a new and lively beach there which has babbling fountains and restaurants and an excellent bike track as well. And in the center of the town are the remnants of Art Deco from the 20s that add a real dash to the classy resort. The streets have a lot of spas as well, the Ruutli street is the night life place for visitors there. This is every inch Estonia’s summertime capital.

Suggested Read: 12 Best Places To Visit In Estonia In 2021 For Seeking The Ultimate Adventure

The warmer months of the year is when Otepaa draws a lot of crowd of hikers and mountain bikers to the trails of Valga Country. People here stroll through the thick fir forests and Puhajarve lake. This is known as the winter capital of Estonia as the snow hits this place really bad in the winters. The Nordic ski track here delves in the deep woods and the ski jumps roar from the cheers of the locals and various downhill alpine runs that offer smattering pistes. Aside from the outdoor actions the Place also boasts of a gorgeous church and remains of an aged citadel, perfect for the history buffs.

The Soomaa national park is unquestionably a very enchanting destination in all of Estonia owning to the flooded forests with the mystical bayous in there. The site is about 359 square kilometres of low-lying peat bogs and undulating dunes that has shades of brown, green and white that keeps changing throughout the seasons. The Raudna river is a must visit for all the outdoor lovers, kayaking and canoeing is a rushing scene over here. The hike through the alluvial meadows is a must visit here as well.

The Saaremaa island is up there with Tallinn, this place offers a wonderful landscape of the washed out windmills and breezy meadows that sprawls with forests and beautiful coastal stretches, rich in Baltic salt. The reaches of Loode the Kaali meteorite craters, the beautiful Bear Lake and the hot springs of Puhatu are amongst the top visited places here. The folk culture of this place adds to the dash here and so does the high quality vodka.

Narva is along the borders of Russia in the eastern recesses of the Island. Narva has a different character as it isn’t similar to the all the other places in this Baltic land. The locals here speak Russian and that adds to a Moscow like character. The jewel, as well as the main attraction of Narva, is the Hermann Castle. The place has a Soviet influence to it and there are nearby resort ships that come complete with the long beach in Narva that is the longest beach in the country. There are several spas as well.

The Matsalu National Park is a beautiful mix of riparian wetlands, blooming flood meadows and reed grass plains on the courses of the Kasari River Delta. This place is a paradise for nature lovers and wildlife seekers, the place is a 400 square kilometre area with endangered birds. You’ll be able to find here birds like barnacle geese, tufted ducks and the white tailed eagle. Wild horses roaming in the wetland can be spotted between the timber fishing huts and Suitsu hiking trail.

The second largest island on the country, the Hiiumaa island connects Europe’s longest ice road to mainland winter. People heading there tend to head straight to the coast, that is virtually completed and isolated and peppered with old lighthouses like the Kopu Lighthouse, one of the oldest lighthouses on the planet. The inland reaches of the island features crooked timber farmhouses, mills, dense forests at the Suuremoisa park.

This independent city of Estonia is officially the second city but people here consider it as the first. The city has a stronghold of students and a large margin of Russian speaking population. The University of Estonia, leafy reaches of Tooemaggi, the historic citadel of the city, the Tartu Cathedral are all the top places of interest here. The Tartu has many lecture halls and al fresco beer bars and many underground clubs as well.

Tuhala is among Estonia’s major historic cities. Traces of humans dating back to three millennia has helped the place earn this name. This place is a home to mysterious collection cult stones, curious cup marked carvings, sacred sites of pre-Christian traditions and religious statues. Timber roads dating back to the fourth century and the legendary Witch’s well are two unique things to look at. Additionally, the subterranean channels of this region bubble up to overflow into the surrounding farmlands.

This castle topped town of Kuressaare on the edge of Saaremaa Island, it is the westernmost city of the country. The unique geography isn’t surprising as it oozes German and Swedish influences going from the bulwarks to the citadel to the Baroque traces decorating the municipal buildings on Keskvaljak Square. Kuressaare is famous for its coastal spas and silt deposits that helped to make the city a prime choice for naturalist and ecotourists.

Even though Estonia in winter gets dreadful cold, one can enjoy and cherish the place with all the things to do in Estonia in winter listed and the places mentioned are a must visit as well. Estonia winter activities thus help with the dreadful winter and cannot kill the Estonian tourist vibe. So, plan a trip to Europ, head to Estonia for a wintery escape!

Kanto Lampo Waterfall: All You Need To Know About This Magical Attraction In Bali

10 Enchanting Places To Visit In Khao Lak For A Fun And Frolic Holiday In 2021!

20 Best Restaurants In Nainital That You Must Visit In 2021!