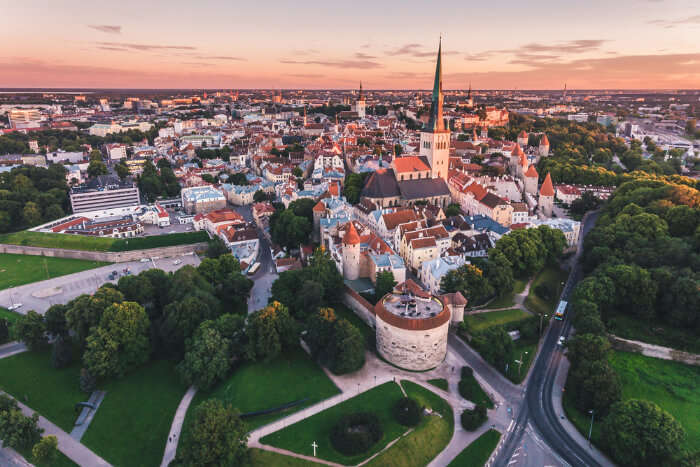 Located on the eastern shores of the Baltic Sea, Estonia’s geography is dominated by flatland embellished by a myriad of lakes and ponds, primeval forests, verdant meadows, saunas, pristine waterfalls and an absurd number of meteorite craters. Divided into 15 counties or ‘maakonnad’, with Tallinn as its capital, its ethnically heterogeneous population is a wellspring of contemporary culture, characterized by a mix of urban modernity and pastoral heritage, influenced by traditions of Finnic, Baltic, Slavic and Germanic peoples. To make your journey easier, we’ve come up with 17 best things to do in Estonia.

While Tallinn has been often referred to as the ‘Silicon Valley of Europe’, as many latent global companies spend their gestational periods in its technological hub, Tartu – inhabited by contradicting classical and postmodern architecture, and statues – is considered its cultural capital.

Top 17 Things To Do In Estonia

Owing to its marginal population, away from the urban sprawl, Estonia is also home to extensive woodlands – an abode to lush flora and fauna. To help you achieve your travel goals, we’ve shortlisted 17 things to do in Estonia:

Image Source
Influenced by other Scandinavian open air museums, an interest in representing 18th century vernacular architecture resulted in a recreation of its rural, fishing villages. The painstakingly accurate depictions of churches, inns, mills, farmyards, schoolhouses, etc occupy 72 hectares of land. Established in 1957, this simulation offers a glimpse, not only into the architectural, but also the sociological structures that ensured a harmonious country life in the 18th century pastoral settings of North, South and West Estonia.

Image Source
One of the largest art museums in Northern Europe, the Kumu, or the “Kunstimuuseum”, showcases both Socialist Realism and Nonconformist art from the 18th century, thus tracking the evolution of artistic thought and processes. Stilted on the limestone slope of Lasnamäe Hill, the building housing these collections was itself rendered a postmodern work of art by its designer, Pekka Vapaavuori. One must visit the Kumu, as the paintings showcased depict the ways of life, socio-political beliefs and turmoil of its time.

Must Read: 12 Best Places To Visit In Estonia For Seeking The Ultimate Adventure!

Image Source
A Masterpiece of the Oral and Intangible Heritage of Humanity, this festival is a notable event for Estonians as it takes place once every five years, in July. Organized to raise awareness of intangible cultural heritage, it encourages local communities to protect and sustain their cultural expressions. The scope and magnitude of this event is evident in that: 30,000 singers perform to a crowd of over 80,000. To have a community experience with an aura specific to Estonian culture, music and dance, make sure you check this festival off your list.

4. Karula National Park: Take a walk on the wild side

Image Source
Located in the Valga and Võru Counties, it’s a verdant vista of the vegetation and wildlife indigenous to Estonia. Covering an area of 123 km², it is the smallest national park of Estonia, located in its southern hemisphere. Its green, hilly topography and serene lakes offer an unparalleled, paradise-like tranquility. It also serves as a shelter for several endangered floral species and fauna. Make sure to trek through this national park to view Estonia’s zoological and botanical landscape.

Founded in 1952, the young at heart are sure to rejoice the several attracts put showing on stage at the NUKU Theatre and Museum. Tallinn’s esteemed puppet theatre stages a wide range of productions, from glove puppet shows to musicals and its high tech museum consist of ‘Costume Room’, ‘Cellar of Horrors’ and the ‘Tunnel of Masks’ where you’re allowed to engage with various aspects of artistry involved in puppet shows.

6. Valaste Waterfall: Check out the highest waterfall in Estonia

Image Source
Make sure to visit the Valaste Waterfall, located on the Ontika limestone cliff, especially during the winters. Falling from a height of 30m, it’s the highest waterfall in Estonia, Europe . During the winters many tourists flock to its site as the spray from the fall freezes to create a spectacular formation of icicles. Opposite to the waterfall is a platform for it to be viewed, which can be accessed by a double spiral staircase.

Suggested Read: 35 Best Places To Spend Christmas In Europe 2021: Where Festivities Breathe Magic Into The Air!

7. Whisking Galore: Chill in the sauna

After all the travelling and sightseeing, make sure you spend time in the world famous saunas of Estonia. But make sure to do it the Estonian way, i.e., whisk yourself. It involves a gentle beating with birch branches from the forest. This in itself acts as a gentle massage enabling better circulation. After spending 30 minutes in the sauna, roll in the grass and let the steam evaporate on a quiet evening.

Suggested Read: 10 Amazing Hostels In Estonia To Stay At On Your Northern Europe Sojourn

8. Tartu Toy Museum: Make the child in you happy

Labeled the biggest toy museum in the Baltic countries, its attractions have mesmerized not just children but adults as well, over the years. Displaying several thousand toys, some of which visitors can engage with, this museum is surely going to tweak the nostalgic side to you, having you swoon for your childhood days, all the while making your children’s worth swooning after (that is, if you have any).

A former nationalized building, it was returned to the Estonians, after which, during the period of 1940-1954, the detainees’ cells were located. The basement of the building is what stands for the museum and puts on display the crime committed during the Communist regime. Several prisoners were kept in these cells in the interim of their passage to the Siberian prison camps. It is a melancholic yet intriguing glimpse not only into life in the gulags and the happenings of the Grey House (former KGB headquarters), but also, the Estonian resistance movement. Thus, it also pays tribute to the resilience of the prisoners and it is surely a visit you must make time for.

Suggested Read: 10 Grand Castles In Estonia That Are A Mix Of Beauty & History!

Image Source
Known for its scintillating view and white sands, this beach is one of the favourite attractions amongst the locals. Whether it’s mini golf, windsurfing or vibrant bonfire parties, there’s tons of fun to be had at this beach. Home to 19th century timber villas and coastal beaches, Pärnu has been consequently crowned the ‘summer capital’. Make sure to get tanned lounging under the sun during summers.

Founded in 1997, The Science Centre AHHAA is an embodiment of the country’s economic and cultural focus on technology and scientific progress for common disadvantages. The centre organizes the ‘Annual Researcher’s Night Festival’ to promote a scientific approach to quotidian activities. Its planetarium offers an optical view as well as a digital projection of the starry sky in a spherical hybrid planetarium; and its 4D Adventure Cinema offers a glimpse into the mind-bending potential of the visual medium.

Image Source
Kiiking is a sport played and promoted in Estonia in which a person makes a swing gain more momentum in order to pass over the spindle with the longest shafts possible. It was invented by Ado Kosk in 1993. Surely not for the weak hearted, but if you crave an adrenaline rush make sure to give this sport a try. There are various locations where one can play this sport. Due to Estonia’s erratic weather patterns, the best way to get in touch with an organization or a provider is to contact the Estonian Kiiking Federation. They will get you in touch with a professional who will train you master the sport.

Image Source
Tallinn Old Town’s most grand and largest orthodox cupola cathedral, this place is built in a unique Russian revival technique and is surely nothing less than a sight to behold. The cathedral is filled with intricate detailing that the visitors find most fascinating, including the many bells inside, one of which weighs around 16 tons. Taking a tour of this place surely tops the list of things to do in Estonia!

Image Source
Having so many artifacts portraying the history and folklore of Estonia, the Estonian National Museum is definitely not to be missed. You might get slightly overwhelmed by the mere idea of getting to know so much about the traditions of the locals at this place. One of the main things to see in this museum is the original attire being displayed in the glass shielded cubicles.

Suggested Read: 6 Best Estonian Restaurants And Some Useful Tips For Dining In Estonia

15. Haapsalu Castle: For The Glory That Precedes

Image Source
An absolutely remarkable work of architecture is the Haapsalu Castle in Estonia that stands proudly boasting of the history that the castle and its residents have witnessed. It was resided by the authorities until the 17th century. You can tour the extravagant fortress, the cathedral and a museum that is located at the site. Don’t miss out on this one as it is amongst the most exciting things to do in Estonia.

Image Source
Eight metres tall and fifty metres wide, the widest and highest waterfall of Jägala in Estonia is a must visit. Starting from the famous Jägala river, this waterfall flows into the Gulf of Finland. During the summer months, this waterfall offers stunning views adding more to the charm of this place but the winter months have a spectacular icicle in store for all travelers as it freezes into thick ice slabs. One of the most romantic things to do in Estonia is to visit this scenic place!

Image Source
Constructed on the orders of the ruler Peter the Great for his beloved second wife Catherine I, Kadriorg Palace took 7 years to be completed. At present, this palace is home to the Art Museum and has foreign arts like paintings, applied arts and sculptures on display for the visitors. You can also visit this palace during an exciting event like a concert, art studios or excursions that this place is known to host.

Estonia is home to a myriad of stimulating phenomena that is sure to awake one’s sensibilities and offer a new perspective on the spectrum of cultures that envelope our world. Make sure to book your ticket to Europe and indulge in these thrilling things to do in Estonia. We promise that you won’t be disappointed.