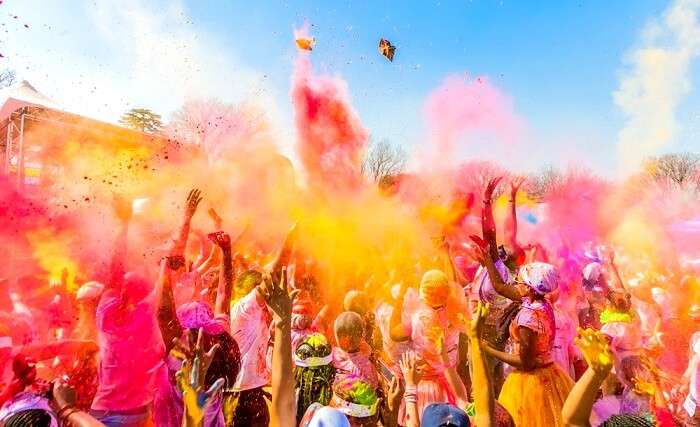 The sound of the drums, guitars, and the piano, and the aroma of fresh food and wine, and the chatter amongst friends, festivals in South Africa are like a family get-together. With everyone on the streets to enjoy international artists perform, there is always some festival that is scheduled for any given time!

From themes to historic, you will find music festivals in South Africa as well as South African traditional festivals, all celebrated with the same zest here. Be a part to some of the world’s best art, jazz, culinary, and family-oriented festivals on your trip to South Africa. Here are some of the most enjoyable events in the country!

Take a look at the best South Africa festivals which are must-attend events as you’ll get acquainted with its culture in the best way! 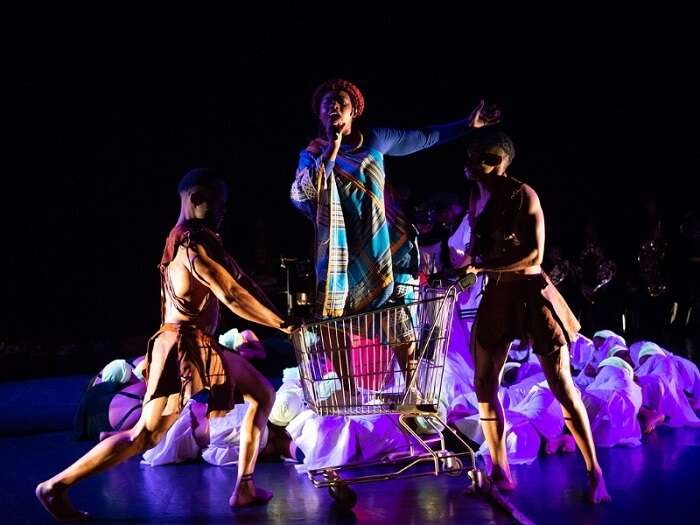 Out of all the art festivals in South Africa, the National Arts Festival stands out/. Famous for being one of the greatest gatherings of artists from all over the world, this event is one of the best in the country. With a no restraint rule, you will get to see some of the most incredible art pieces here.

When: June, July
Where:: Grahamstown

Must Read: Shopping In South Africa: For A Fancy Affair At The 9 Best Markets & Malls In The Country 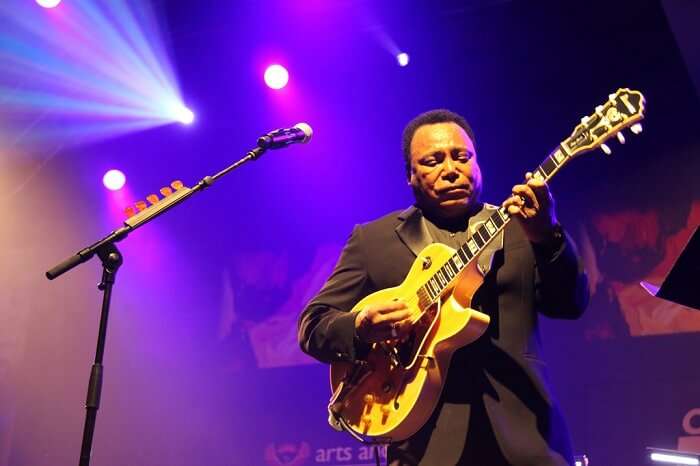 An event that needs no introduction, the Cape Town Jazz Festival is one of the most prestigious jazz festivals in South Africa. It is the fourth largest jazz festival in the world and musicians from all over the world come together to bring the best of this genre of music.

When: March
Where:: Cape Town 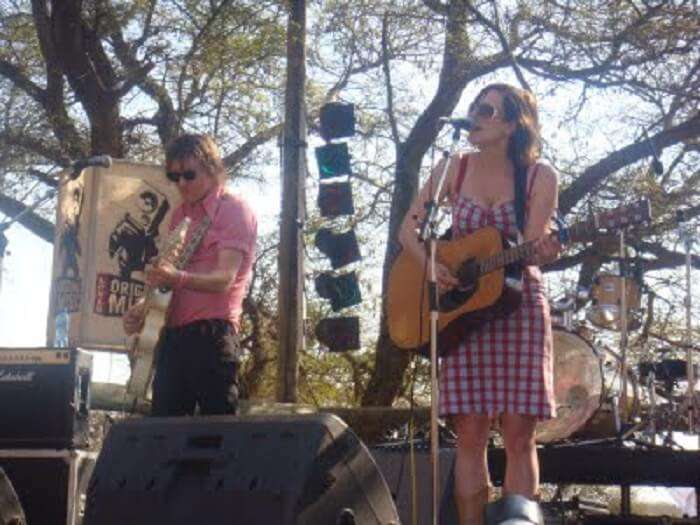 One of the biggest music festivals in South Africa is the Oppikoppi Bushveld Music Festival. While it started off as a rock music event, it has slowly graduated to a variety of genres being played over a couple of days.

When: August
Where:: Limpopo Province 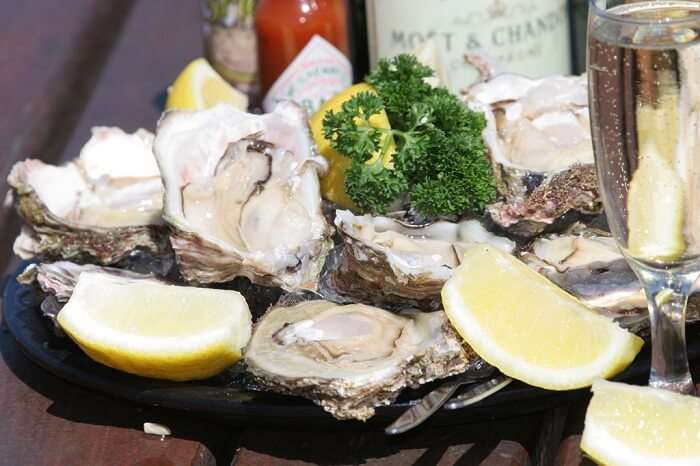 Often termed as the ‘Best 10 Days of Your Winter’, the Knysna Oyster Festival is one of the best outdoor family and community events of South Africa. The two most popular events of this event are Pick n Pay Cape Times Forest Marathon and the Pick n Pay Weekend Argus Rotary Cycle Tour.

When: June, July
Where:: Knysna

Suggested Read: 15 Best Places To Visit In Mozambique To Quench Your Wanderlust 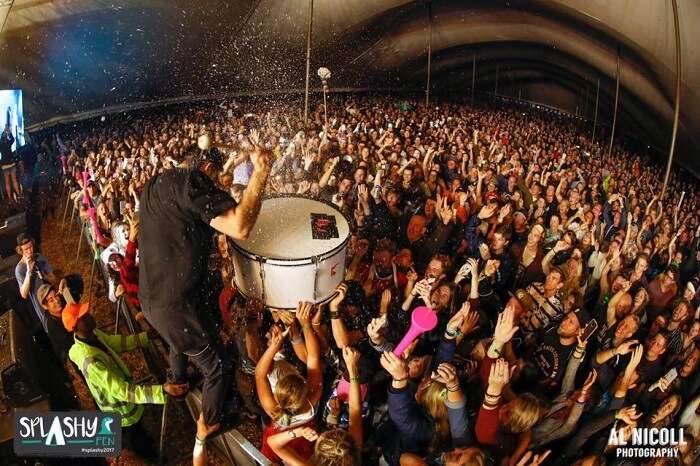 Of all the events of the list of music festivals in South Africa, Splashy Fen Music Festival is the longest one. With artists performing on the stage, the event also includes a number of other things like craft stalls, food carts, and other events for children too.

When: April
Where:: Underberg 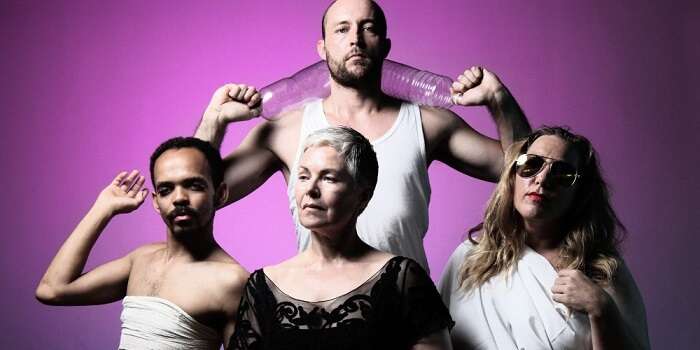 One of the famous art festivals in South Africa is the Klein Karoo Nasionale Kunstefees (KKNK). While this tradition began in the year 1994, it has grown exponentially to become nothing less than a movement. Visual and performing arts of South Africa are celebrated here.

When: March
Where:: Oudtshoorn 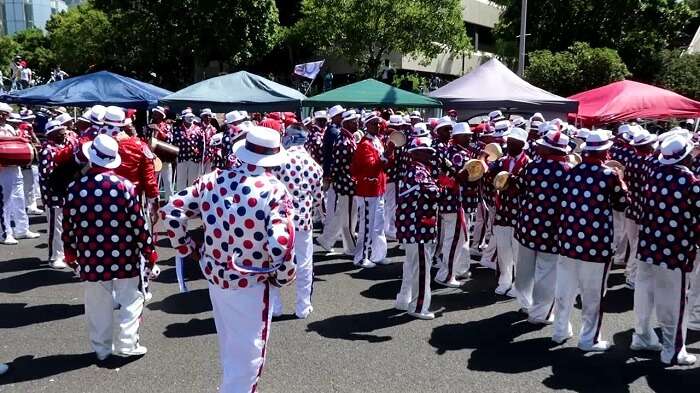 Also known as Kaapse Klopse, the Cape Town Minstrel Carnival is amongst the top 10 festivals in South Africa. More than 10,000 minstrels come down to the streets for celebration, and put on a beautiful sight with costumes, umbrellas, a variety of musical instruments, and of course, traditional songs.

When: January
Where:: Cape Town

Suggested Read: 8 Experiences That Encapsulate The Best Of South Africa In August 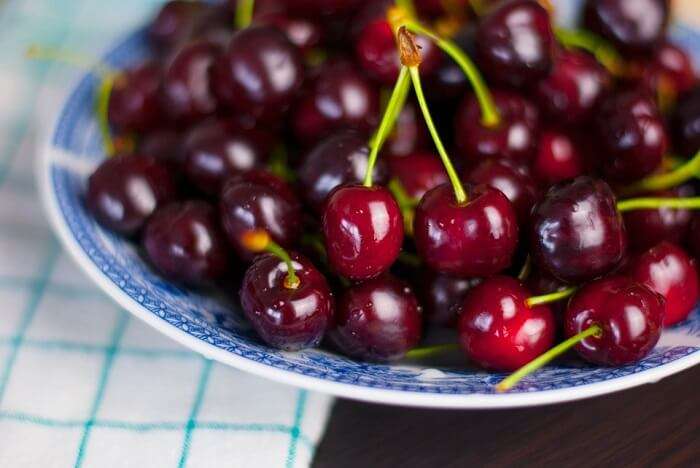 The Ficksburg Cherry Festival is renowned for being the oldest crop festival in South Africa. Apart from cherry product competitions, this event also organises cherry tours, marathons, exhibitions, and more. Stalls of food and beverages, along with games are also available. 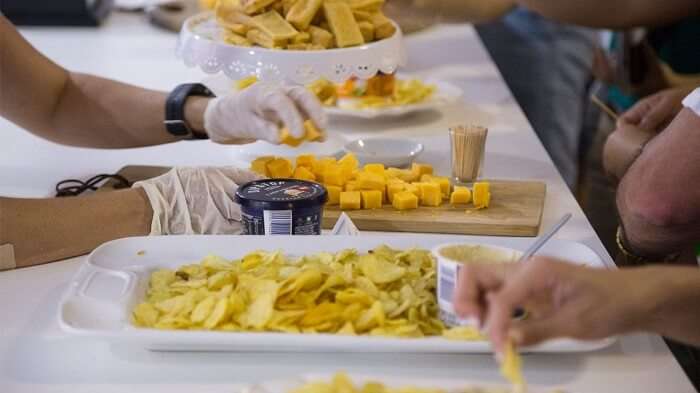 One of the top events in South Africa, the South African Cheese Festival is the best opportunity presented to culinary experts to showcase their talents. Celebrity chefs as well as beginners are part of this celebration of food. The only main thing is that the star of the show is cheese!

When: April
Where:: Stellenbosch 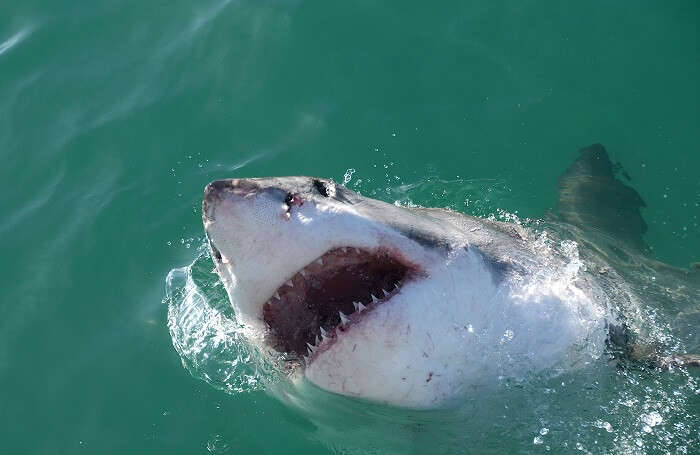 One of the first and probably the only eco-marine festival of South Africa, the Hermanus Whale Festival celebrates the ocean and its majestic habitants. September is the best time to go whale watching, with the famous Southern Right Whales putting up quite a show.

When: September
Where:: Hermanus 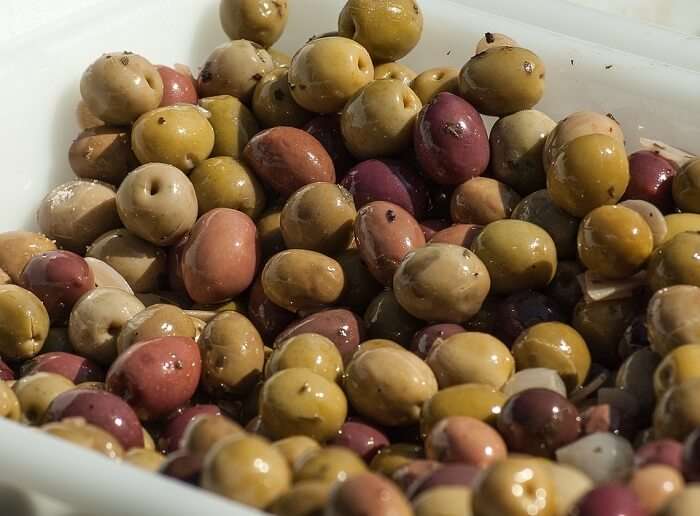 Image Source
Out of all the culinary festivals celebrated in South Africa, Prince Albert Olive Festival is a shade more special. Paying homage to the wonderful produce of the valleys of Swartberg Mountain Range, this fest is a competition amongst the locals on who has the best food stall!

When: April, May
Where:: Karoo town 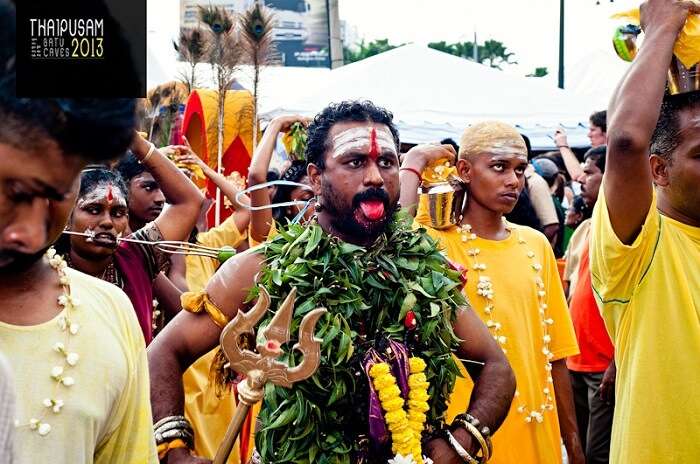 Dedicated to the Tamil god, Lord Murugan, Thai Poosam Kavady festival is an important religious festival in South Africa. Tamils from all over South Africa come together to celebrate this event with music, dance, art, and of course, food!

When: January (Multiple dates)
Where:: All over the country 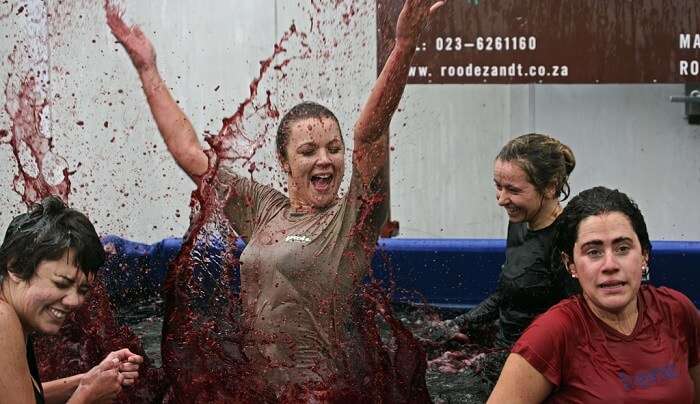 Head to the best of the wine festivals in South Africa, the Robertson Wacky Wine Weekend. Just as it sounds, it is one of the most happening and fun events to be a part of. Not only are the exquisite wines celebrated here, but couple that with multi cuisine delicacies, and you are in for a treat!

When: June
Where:: Robertson 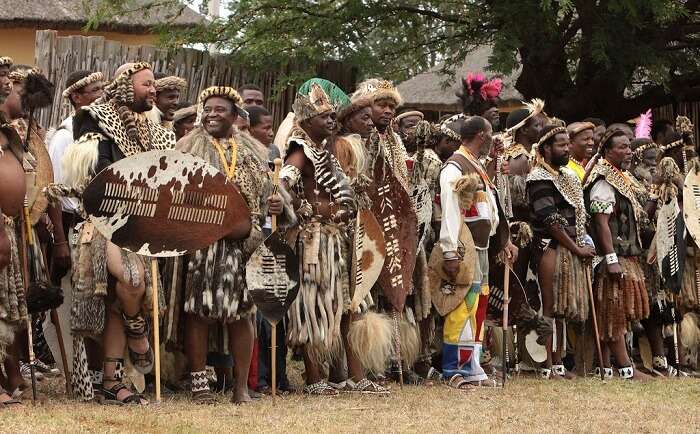 Also known as Umkhosi Mhlanga, the Royal Reed Dance is performed by girls from all over the country. Since it is a royal dance, there are some rules. While some of the customs have recently been changed, it is the attire and the traditional dance which is beautiful to say the least!

When: September
Where:: Nongoma 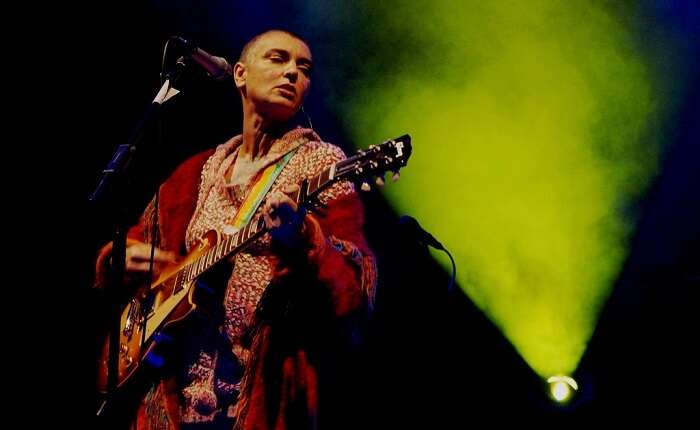 Another one of the major festivals in South Africa is the Arts Alive Festival. A blend of the best of art, craft, dance, music, and theatre, this 4-day festival is only just a glimpse of the treasure of art that the country carries.

When: September
Where:: Johannesburg

So, here are the top 15 festivals in South Africa. From the best of art to the intriguing history and religion, there is much to see and learn here. A few honorable mentions of some more festivals would include Jacaranda Festival, Johannesburg International Mozart Festival, and Cape Town Pride. So, plan a trip to South Africa and attend these festivals for a vibrant holiday.

What festivals are popular in South Africa?

When is the ideal time to visit South Africa?

The best time to visit South Africa is from May through October. This is when the days remain clear and warm along with colder nights.

Which is the most important holiday in South Africa?

The most important holiday of South Africa is Freedom Day which is a public holiday celebrated on 27th April each year. The day celebrates freedom and commemorates the very first elections of post-apartheid held in 1994

What are the major holidays in South Africa?

Which is the most popular Music Festival in South Africa?

Out of all the music festivals in South Africa, Splashy Fen Music Festival is usually the longest and the most popular one.

What is the significance of the Ficksburg Cherry Festival?

The festival is marked as being the oldest crop festival in South Africa. There are competitions held in addition to cherry tours, exhibitions, marathons and many more.

Is Cape Town Jazz Festival one of the biggest festivals in the world?

Cape Town Jazz Festival is the fourth largest jazz festival in the world with musicians from all over the world coming together to celebrate all genres of music.