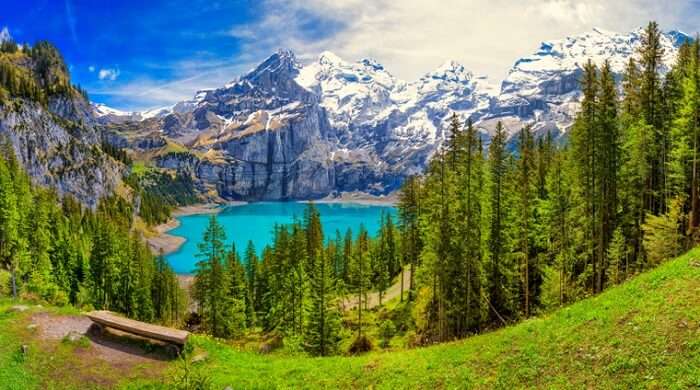 The very idea of heaven on earth must have been derived from a landscape not far from Switzerland. The glaciers and the mountain tops, the ski routes and snow powders, it all contributes to making Switzerland one of the popular destination on earth and very rightfully so! And to tell you just how pretty it is, we have listed all amazing hill stations in Switzerland which are a luxury honeymooning dream for most Indians and, who are kidding, even the rest of the world!

Switzerland has reached to its elite status in the run for Honeymoon spots and all the credits go the mountain peaks that are blissfully pretty and deservingly celebrated by hikers and skiers. White and greens interspersed along browns and reds, with each ascent you get a prettier view.

The Most Beautiful Hill Stations In Switzerland

For the travelers and trekkers, backpackers across the globe, it’s easier to go for a climb on the Swiss Alps rather than the rugged Himalayas or the daunting Andes in South America. The best part about climbing the Swiss Alps is that these hills are accessible by both novice and experienced climbers.

Switzerland Hill Stations are wrapped in legends and so is Pilatus. There goes a popular story, Pilatus Hill Station that stands at 2132 m south west of Lucerne has got its named after a Roman prefect Pontius Pilate. His dead body has once discarded the lake on top and the lake is apparently haunted, hence the name! And there are some who believe the name is derived from the Latin term ‘Pilatus’ which translates into English as ‘cloud-capped’.

Must Read: 10 Surreal Lakes In Switzerland That Are Absolute Natural Wonders

One of the Swiss charms, Stanserhorn, is absolutely gentle with an ascending mountain where the wind blows softly and your hairs go adrift. You see the change in the landscape beneath you that changes with every passing second. You pass by the cozy chalets and the earthy cows and the daisies are beautiful. Prepare yourself for a dazzling splash of snow. This would make you fly high on a cable car with an upper deck and a revolving restaurant. From here you get a fantastic view of Lake Lucerne.

Suggested Read: Treat Your Taste Buds With Luxury At The Best Restaurants In Switzerland

This one in the Swiss Alps is a magnificence sitting at 3089 m and also happens to claim the fame of the most popular excursion site in Switzerland. And the reason behind its glowing popularity is the view of 29 peaks, as high as 4000 m, which you will get to experience on a trip to this Swiss Hill Station Gornergrat. You will experience the intimidating Matterhorn. There are many boulders, and lakes, tunnels and meadows, bridges and pine forests that will greet you with an open arm.

This one is preferable for the experienced hikers generally who go around the Bernese Oberland region and they go all the way to the Jungfraujoch, the peak of Europe the highest that you can reach in this part of the world. If you want a panoramic experience on the trip, go for Kleine Scheidegg. If you pick this one you get to see the best views of the North face of Mount Eiger, a giant at heart.

Suggested Read: Shopping In Switzerland: A Handy Guide On What To Buy & From Where

If you want a ride in the highest altitude cable car that Europe has to offer to take it to the Klein Matterhorn. The name is, as you might have aptly guest by now, Matterhorn Glacier Paradise. It’s located at an altitude of approximately 3883 m and here you will get to see marvelous views of around a dozen glaciers and at least 40 mountain peaks for you to climb for. Say you skip Gornergratbahn, don’t worry, Glacier Paradise have got it covered for you.

If you are planning a visit to Grindelwald don’t miss on the stunning hike of 15 km which will take you to Kleine Scheidegg. The trail ends in the village of Wengen. Don’t stop there. If you are around then I would suggest a trip to see Jungfraujoch. Here you would get to see all the illustrative and surreal views that would capture your memory. Here you can get to Europe’s highest train station which sits at 3500 m above sea level. It’s always the snow and the bone chilling winds and it’s absolutely intense. Jungfraujoch might seem a bit expensive but if you want my suggestion it is nothing compared to the sight of undulating peaks. These extend to the ‘Black Forest’ of Germany.

At around 2970 m above the sea level, Schilthorn attracts the traveler souls across the globe like a moth in the fire. It’s nothing compared to the glory of the Hill station. And what is more, it also happens to be the shoot location of “On Her Majesty’s Secret Service,” one of the most popular Bond movies that were ever filmed. Here you get to spend your time on a revolving restaurant on the peak and they serve both Swiss and International cuisine and the deal comes with spectacular panoramic views of the Jungfrau, Eiger, Monch and even Mont Blanc extending all the way to the Black Forest, especially on relatively clearer days.

Tame the skies with two different kinds of cable car rides (where one revolves to give you 360-degree views) that will get you to the top of this white beauty. And once you’re there, you’ll be greeted with postcard-perfect views of snow-clad mountain peaks till where the eyes can see! Also, don’t forget to check out their souvenir shops in your way down as well indulge in a scoop of some heavenly Swiss chocolate ice cream!

So, how about spending a week or two at these chilly hill stations in Switzerland? Let up whip you an adventure-packed trip to Switzerland with your friends!

Q. How long does it take to go to Mt Pilatus?

A. One can reach Mt Pilatus in around 30 minutes.

A. Yes, Mount Pilatus is free with Swiss Pass.

Q. Is a Swiss Pass worth it?

A. Switzerland is expensive and if one plans on spending a couple of days here covering the expensive rides, then the Swiss Pass would be totally worth it.

Q. Is Switzerland expensive to visit?

Q. Which is the cheapest month to fly to Switzerland?

A. January is one of the cheapest months to fly to Switzerland.

Q. What is the best time to go to Switzerland?

A. April to June is the shoulder season in Switzerland while September & October have pleasant weather.

Q. How many days are enough in Switzerland?

A. One should plan a trip of 5-7 days to explore the spectacular Switzerland attractions.

Top 15 Hill Stations Near Haridwar For Mountain Excursion Holidays In 2020!

15 Hill Stations Near Nagpur That Need To Feature On Your Must-Visit List In 2020!

15 Hill Stations Near Dharamshala: Visit For Total Rejuvenation In 2020!