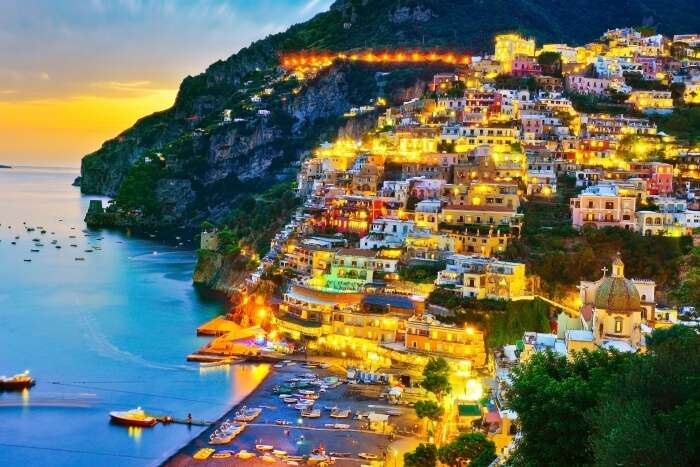 Naples is famous for many things! However, its biggest claim to fame remains its proximity to the volcanic Mount Vesuvius. The mountain is a part of the Campania volcanic arc that has led to the formation of many islands in the Gulf of Naples. Many of these islands near Naples are inhabited like Capri and Procida and are popular tourist destinations, while the other islands are known for their nature reserves and famous for their myths and geology.

From Procida to Ischia, here is a list of our favorite islands near Naples – the city known far and wide for its unparalleled history, culture and nightlife.

Procida is one of the smaller islands near Naples Italy, and not tainted by massive tourism. Although locals visit it from Naples during August, other times of the year, it is entirely tourist free. The island is densely populated and is home to about 10,000 people, however, makes it ideal to discover the Italian culture and lifestyle. The island has a few settlements from the medieval ages including a church and fortresses at the highest level. The main areas of Corricella and Marina di Chiaiolella hug the ocean, and the cliffs support the colorful homes of the fishermen. There aren’t many big beaches, but the best one is the Lido di Procida.

How to get there: By ferry from Naples

Must Read: 10 Best Beach Resorts In Italy That’ll Let You Have A Serene Vacation In This Glorious Land

2. Capri: The Origin Of Capri Pants

If you were reminded of Capri pants, you are not wrong! The famous pant style ‘Capri’ comes from this island where it was the rage in the 1960s and 1970s. Capri is one of the best islands near Naples and a holiday destination even for international travelers. The island has been a resort town since the Roman times, and there are archaeological traces even today. The main attractions on the island are the Marina Piccola, the rocky cliffs of Faraglioni, the town of Anacapri and the stunning sea cave known as the Blue Grotto. The island is the playground of the rich and famous, and you will find many luxury boutiques, fine dining restaurants, and yacht clubs on the island.

How to get there: By ferry from Naples, Sorrento, Positano, and Amalfi

Ischia is known as the green island due to its verdant green mountain slopes. While most tourists head to islands for some sun and sea, Ischia is a great place to indulge in trekking the highest mountain on the island ‘Mount Epomeo.’ The views from the summit are spectacular and will help you appreciate the beautiful area of Bay of Naples and the beaches of Ischia. It is also one of the volcanic Islands near Naples and many tourists head to the hot springs and spa which have come up due to the volcanic activity. Other exciting sights on the island are the Aragonese Castle, the Gardens of La Mortella and Villa Ravino, and the Bay of Sorgeto and Poseidon Gardens with the hot thermal springs.

How to get there: By ferry from Naples or Pozzuoli

Best time to visit: May & September

Nisida is a tiny islet near Naples, and even its name comes from the Greek word for islet. Unlike other volcanic island off Naples, Nisida is connected to the mainland by a stone bridge. The island is connected to the Cape of Posillipo and has a pretty marina and harbor that is frequented by tourists who visit the resort town of Posillipo. Nisida is pretty small and just two kilometers in circumference but is circular and even has a volcanic crater in the middle which is now filled with water. The island looks like an emerald out of the sea and today hosts the Italian Navy office and a prison facility.

How to get there: By walking across the bridge from Posillipo

Vivara is one of the famous island near Naples, Italy although it’s not due to tourism but due to its mysterious nature. The entire island is closed off due to its ecological importance; it is home to over 200 endangered bird species. The island is connected to the island of Procida by a bridge, but it remains protected by the government of Italy. The island is covered by native vegetation known as ‘macchia Mediterranea’ that is decreasing from other places. A lot of research goes on the island and to prevent any loss of flora and fauna it is closed for tourist activity. The island also has archaeological evidence from Mycenaean and pre-Mycenaean times, which proves that the ancient Greeks had occupied this island!

How to get there: Closed for tourists

‘Gaiola’s Malediction’ it’s what makes the Gaiola Island one of the famous islands near Naples. The small island is located just off the coast of Posillipo, and one can even swim to the island. There is an old house on the island which is known to have a curse on it! Anyone who owns the house or is related to it in anyway befalls a problem including death! All the previous owners of the house in the past century have been dead in mysterious circumstances. Even the last owner of the island Gianpasquale Grappone was jailed!! Despite that, the island is important as it is now a part of the marine reserve known as the Underwater park of Gaiola.

How to get there: Closed for tourists

Best places to stay: No hotels

Ventotene is one of the islands near Naples that offer a real rustic feel of Italian isles. It is a relic of an ancient volcano and is quite small, stretching just 3 KM in length and a width about 800m. The island has a small settlement that houses about 700 people and caters to a lot of tourists during the summers. Historically the island was used by the Roman Empire to banish high-profile prisoners, and it has remains of the houses, which are kept in the island’s archaeological museum. The museum, old Roman ruins, a lighthouse, and the ancient Roman harbor are some of the attractions of the island. You can spend a day exploring the island, which has a few good restaurants and bakeries.

How to get there: By ferry from Formia, Inzio, and Ischia

Palmarola is one of the most beautiful islands near Naples and the famous French oceanographer Jacques-Yves Cousteau said that it was ‘The most beautiful island in the Mediterranean Sea.’ One look at the island and you would believe it too! It looks like a natural cathedral; it has seven grotto-like openings that lead to caves inhabited by birds. It is a nature reserve, and there are no permanent residents on the island; however, there are ports where tourists can land on the beach and during the summer locals from Naples set up food stalls. The green cragged cliffs lead the way to beautiful crystal clear waters that remind of exotic islands!

How to get there: By private boat from Naples

Suggested Read: What Makes Italy In November To Have A Great Time Along The Mediterranean Coast

Ponza is one of the best-kept secrets in Italy! The pretty island is a summer retreat for many Italians, but it hasn’t yet caught the eye of international tourists. It maintains the rustic charm of a traditional Italian island with its quaint cafes and restaurants that serve fresh fish. The island has many caves nearby, and the waters around are ideal for swimming. The island has a lot of history attached to it and is also rumored to the be the island of Aeaea in Homer’s Odyssey. The small settlement is colorful and has beautiful beaches at Frontone and Santa Maria. The best way to enjoy the island is to summit it and watch the island and its harbors, beaches, and grottos from a bird’s eye view.

How to get there: By ferry from Formia

10. Santo Stefano: A Piece Of History

The Santo Stefano is a piece of history in the Mediterranean Sea. The island houses an old prison with horrid tales to tell! The horse-shoe shaped prison was a novelty back in the 17th century when it was designed to ensure that the guards could keep a watch on all prisoners at the same time without the prisoners knowing about it! The prison is not maintained but remains a tourist attraction, and regular boats from Ventotene take guided tours of the island where many famous people were imprisoned. Nobody stays on the island, and it is an excellent day-trip when visiting nearby islands.

How to get there: By private boat from Ventotene

Best places to stay: No hotels

Further Read: Pompeii Ruins: Everything You Need To Know About This Historic Gem In Italy

The UNESCO World-heritage City Centre, Neapolitan Pizza, S.S.C Napoli Football Cup, and the highest Michelin Stars of any Italian City, have a thing in common, Naples. If you love the idea of vacationing in these islands near Naples while holidaying in Italy, you will be in for a pleasant surprise. They will certainly be a getaway from the busy tourist areas in Italy!

What islands are located near Naples?

Some of the beautiful islands near Naples are Procida, Capri and Ischia. These islands offer picturesque views and pristine beaches.

Which is the most beautiful island in Italy?

Some of the most beautiful islands in Italy are 1. Capri 2. Ischia 3. Sicily

How do I get to Capri?

The only way to reach Capri is by waterways. There are many ferries that start from Naples and Sorrento and will take you to Capri.

Inspired By Hangover 2, He Planned a Trip To Thailand, And Boy Was It Good!

Which Network Is Best In Andaman? Doesn’t Matter, Manas’ Andaman Trip With Family Was All About Disconnecting!