Istanbul In March: Soak In The Blissful Vibes Of This Charming Land On A Trip In 2020 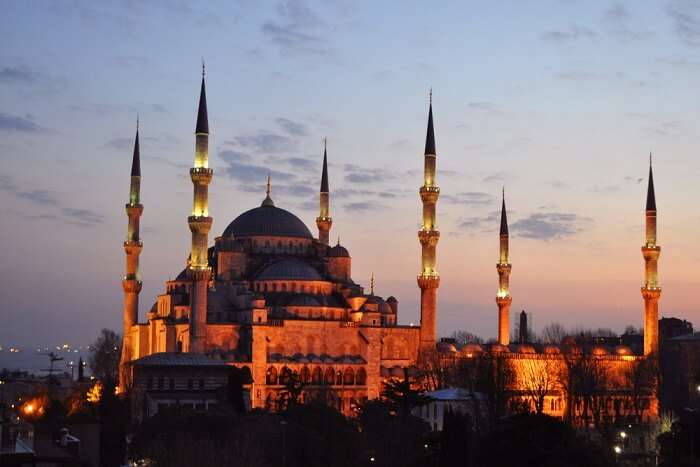 Istanbul is one of the most impressive cities that has mesmerizing architecture, delicious food, and warm and hospitable people. It’s a city that people from all over the world love to visit over and over again. Laying between two continents – Europe and Asia, it is indeed a unique city that inherited cultures from both the lands. Even though Istanbul is said to be the meeting point of the east and west, people come here to experience the coexistence of the old and the new. Istanbul in March is particularly beautiful, as the weather is pleasing. This is the perfect time to see the true colors of the city.

Istanbul is excellent during the spring or the fall. Istanbul weather in March is quite comfortable. Moreover, during this time, the crowds are thinner, and you can see all the bright colors of the city. Additionally, during late spring, you can even see the International Tulip Festival. Istanbul weather in March 2020 is expected to be like that of the previous years. The average high is around 13 degrees centigrade with a low of 6 degrees. The rainfall is a moderate of 6.83 centimeters.

Want to know what to wear in Istanbul in March? You will need to pack a few warm clothes because it gets a little chilly during this time of the year. Rainfall slowly decreases March onwards, but you will still need a raincoat for the occasional showers. Days are brighter and longer, and you will be all settled for visiting Istanbul in March with a few woolens because all in all the weather in Istanbul in March is a perfect time to explore the city.

10 Best Places To Visit In Istanbul In March

So, if you’re still trying to decide about what all to explore in this scenic land, here are the top places to visit when you are in Istanbul in March 2020 for your next trip!

When you travel to Istanbul in March, one of the most prominent buildings that you see in the skyline is the Galata Tower. It offers amazing views of the old city and the places surrounding it. This medieval tower was constructed out of stones and is known as the Tower of Christ. Since 1348, it has been the tallest building in Istanbul. The tower has seen numerous modifications over the centuries, but still maintains its ancient look. Presently, it is used to spot fires. At present, the top of the tower houses a café, a nightclub, and a restaurant. All of them are accessible using an elevator. The view of the entire city from the top of the tower is truly stunning.

Must Read: 10 Best Places Near Istanbul To Explore The City Beyond Its Borders

The Istanbul Archaeological Museum is a collection of three museums – The Ancient Orient Museum, the Tiled Kiosk Museum and obviously, the Archeological museum. This is the most important museum in Istanbul. The three museums have a total of over a million objects from various civilizations all across the world. It was founded back in 1891 and was the first Turkish museum. It is situated at the Topkapi Palace Grounds and is a perfect place to see while visiting Istanbul in March. The Tiled Kiosk Museum is way older and dates back to the year 1472. There are thousands of precious artifacts and includes the sarcophagus of Alexander the Great.

This Cistern has been the source of water for Istanbul for many centuries. It was constructed in the sixth century, ordered by the Roman Emperor Justinian I. Places like these talk volumes about how advanced the ancient civilization was and how Roman technology is still relevant in the 21st century. The underground site is quite close to the famous Blue Mosque and was built in the area of a basilica. A basilica is a public building that was used as courts and served various public functions. This place is also known as the Sunken Palace and can hold 2.8 million cubic feet of water. Fans of James Bond movies will be able to recognize this place as back in 1963, parts of the movie ‘From Russia with Love’ was shot in this location.

This place may be a little off route for tourists, but the beautiful Byzantine art of this church leave an everlasting impression. The décor and the architecture of the church will be truly worth your time. You can see the stories of Jesus and Mary depicted through magnificent fresco paintings and mosaics in the church. Initially, it was known as the Church of the Holy Savior in Chora. This church is considered to be one of the most beautiful works of the Byzantine era that is still surviving today. Back in its early years, during the times of Constantine, it was a monastery. Later, it became a mosque. In 1948, the Chora church was converted into a museum. If you’re visiting Istanbul in March, make sure to explore this place.

The Suleymaniye Mosque is famous for its beauty and peace. It instills a sense of spirituality among those who have visited. Sultan Suleyman ordered the construction of this mosque on top of the Third Hill of Istanbul back in 1550. The mosque is a perfect example of how Islamic architecture and Byzantine architecture together can produce a work of art. The mosque had gone through some tough times, especially during the first World War when a fire broke out in the surrounding gardens. During that time, this place was being used as a weapons depot. At the four corners of the mosque are four minarets, signifying the fact that it was built but a sultan. During the Ottoman empire, this mosque had the highest dome.

Shoppers should definitely not miss going to the Grand Bazaar while visiting Istanbul in March. As the name implies, this bazaar or market is truly grand, with over five thousand shops and a quarter million visitors every day, making it one of the largest indoor marketplaces in the world. This bazaar has a rich selection of antiques, hand-painted ceramics, carpets, traditional jewelry, spices and more. This bazaar has been operating since 1461 and has presently expanded to accommodate two mosques, two steam baths, four fountains, and the Cevahir Bedesten. Cevahir Bedesten is one of the oldest parts of this market that has for sale some of the most precious gems, antique furniture, and weapons from the ancient times.

The Dolmabahce Palace is a luxurious plush palace. It is often compared to the palace of Versailles. It was built back in the 19th century and has décor made from 14 tons of gold leaf. It is one of the most glamorous palaces in Turkey and has been the home to six sultans from 1856 to 1942. Furthermore, it also has the largest Bohemian crystal chandelier that was gifted by Queen Victoria. Built along the Bosphorus coastline, this is truly a stunning palace.

The Topkapi Palace combines rich history and beautiful scenery to become one of the most important tourist destinations in Istanbul. Filled with rich Ottoman empire history, this place has a radius of five kilometers and 27 towers. The palace is located on a hill that overlooks the Sea of Marmara, the Golden Horn and the Bosphorus. Once, it was the residence of the Ottoman royals, followed by the Sultans and later on, the Turkish government. But now, it is converted to a museum and is the oldest and the largest in the world. Tourists can have a look at the harem’s quarters – the place where the government worked. They can also see the weapons that the Sultans used and the palace kitchen. The treasury is also open to visitors that is filled with a collection of clocks and jewels.

The Blue Mosque is one of the most famous mosques of Istanbul. Constructed back in the 17th century, it is still actively used for worship. The mosque is closed at the daily prayer times of Muslims, but at other times, it is open to visitors. All visitors need to remove their shoes and women should have their hair covered. This will be quite worth it when you get to see the 200 stained glass windows and the twenty thousand ceramic tiles with various tulips painted on them. The blue tiles in the upper levels of the mosque give it this name.

Suggested Read: 6 Theme Parks In Istanbul For Letting Out The Kid In You!

The Hagia Sophia has been the house of worship for multiple religions over the centuries. Since the time of its establishment in 537, it was the home of Patriarch of Constantinople. During the 12th century, this place was a Roman Catholic church for almost six decades. It 1453, it became a mosque, and till 1931, it remained that way. It was closed that year, and in 1935, it was opened as a museum. At one time, the Hagia Sophia, a cathedral, served as an inspiration of many other mosques, even the Blue Mosque. So, do make sure to witness this place while visiting Istanbul in March.

If you still can’t make up your mind about visiting this beautiful country, well, you don’t have to worry! Just like there are some things that can only be believed when they’re seen from the naked eye, you can experience the best of this country only when you explore it on your own. So, plan your trip to Istanbul for a rejuvenating vacation like never before!

Q. Which is the best month to visit Istanbul?

A. The months from April to May and September to mid of November are the ideal time for visiting Istanbul and its inland regions as the weather is pleasant at this time and the sky is clear.

Q. Is Istanbul cold in December?

A. While Istanbul is not exactly cold in December, is surely is the time when the winter knocks on its door. The temperature is a bit cold and the weather a bit wet. It mostly ranges from 10 degrees to 8 degrees.

A. Thanks to a lot of surveys and available statistics, a female traveler can easily visit Istanbul on a solo trip. It is now one of the safest cities in Europe. However, it is best to stay in tourist areas at all times, be alert when amidst crowds, and take care of your valuables all the time.

5 Great Places To Visit Near East Coast Which You Cannot Miss In Singapore!

15 Exquisite Things To Do In Bali With Family For Your Vacay In 2020!

Kevadia Zoological Park: An Upcoming Zoo In Gujarat That Is Taking All The Limelight

20 Most Spellbinding Places To Visit Near Gangtok In 2020