Japan In September: A Travel Guide For Innumerable Exploration 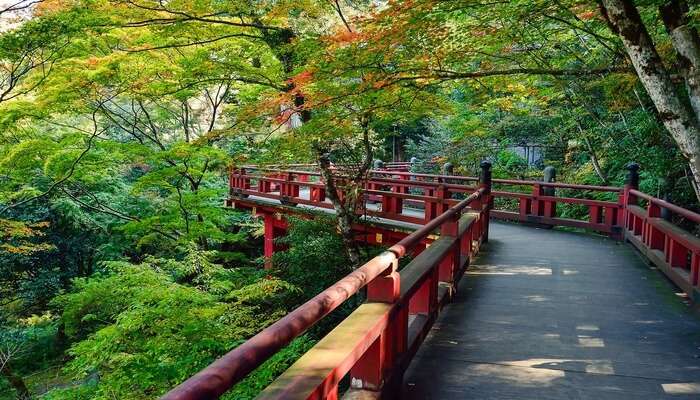 There are many reasons why people love visiting Japan throughout the year. It is a beautiful country to visit any time and every time. Interestingly, it never seems to lack the wonders to see and things to do when exploring this beautiful country. If you are visiting Japan in September then you are definitely in for a treat. Since it will be an autumn month at that time of the year.

The skies would be clear, air clean and with multiple places to visit and things to get involved in, your trip to Japan becomes an overall success.

Weather In Japan In September

September brings an average high in the 80 degree Fahrenheit and the average lows in the 70s. The country is generally lit up by late August and the lights stay on till the end of January. Resultantly, you find a feasible climatic condition for your exploration.

With fewer crowds in the month of September, airfares and accommodations are relatively cheaper. If you are a rail fan, then buying a Japan Rail Pass is inevitable for ultimate exploration.

If you are wondering about the things to do in Japan in September, then worry not and indulge in some of the select activities which are popular during such time. If the weather is on your side, there are a large number of ways for you to experience the best of Japan. Here is a list of the top things you should do and that is definitely going to be a part of your trip in September itinerary:

The Japanese Grand Prix is often an interesting race of a Formula One Season. And, it is also a great chance to see some spectacular sports and live action in front of your eyes. Imagine the ultimate super cars travelling at a speed in excess of 300 kph with a crunching sound. You can’t miss it!

Must Read: Japan’s Godzilla Theme Park To Open Soon In 2020 And It Doesn’t Get Better Than This!

The Sumo Autumn Basho is the last chance of the year to enjoy a professional sumo tournament in Tokyo, Japan. It depicts the cultural and traditional identity of the region. This 15-day tournament starts early in the morning every day and runs until about 6 PM. Travelers can feel the zest of Japanese spirit during the tournament.

Suggested Read: Snorkeling In Japan: 13 Best Spots For Experiencing This Water Adventure In The Japanese Waters In 2020!

Tokyo Game Show is Japan’s biggest video game conference that attracts the legions of video game fans and industry insiders from around the world. As it remains a popular event, photographers always love it because it offers a chance to photograph hundreds of models at the event. Travelers find it an exciting occasion to experience a unique thing.

It is an international racing event in Japan organised with enough excitement to help on the island of Hokkaido in the country. Local teams participate and often win. It is popular with the fans in Sapporo. Visitors and travellers enjoy great moments during the rally.

Suggested Read: 8 Places To Visit In Tokyo In Summer That Should Be On Your Japan Itinerary For 2020

Are you looking for the best places to visit in Japan in September? Here are the top places that you should visit to make the best of your trip to Japan during this special month to tour the region.

1. Tokyo – An Essence Of Japan

Tokyo is a beautiful city in Japan. This city reflects the colours of Japan in multiple hues. Out of the many places to visit in Japan, the popular city of Tokyo deserves the top spot in your itinerary as it explains a miniature nation to you during your exploration. Along with historical sites, this city also has a great culinary scene. It is certainly amongst the beautiful places to visit in Japan where you find ample avenues for fun and frolic and come to know the history of the region to its best.

Of all the major Japan destinations, the sacred city of Kyoto is famous for being the city of shrines, gardens & palaces that make it popular globally. Being one of the famous places to visit in Japan, it is worth holidaying with your family or your partner to re-impose faith through spiritual learning and to know the historical facts as a first-hand observer.

Mt. Fuji is a paradise for all those adventure seekers who have an urge to turn their Japan tour memorable through participating in adventure activities. It is renowned around the world for providing the most exciting experience in Japan. While the authorized climbing season begins from July and ends in September, you can witness the beauty from a distance throughout the year. This is the month when climbing winds up and the zest of the charm redoubles.

Suggested Read: 8 Japanese Desserts That Will Get You Swooning!

Ishigaki Island is absolutely amongst the best places to visit in Japan in September. Despite its size, the island has no limit when it comes to providing you with many unique experiences. As a tourist, you find ample avenues to explore it and also scope for glamming up the holiday in Japanese land reignites during your September trip.

Suggested Read: Solo Travel In Japan: 10 Tips To Remember Before You Pack Your Bags

How To Reach Japan?

Japan is a beautiful country and there are multiple options to visit there including the following ones:

The most famous airports in Japan are Osaka International Airport, Narita Airport, Kansai Airport and Haneda Airport of Tokyo. There are also a number of flights landing and taking off from Ibaraki Airport, north of Tokyo. The major carriers of Japan are Japan Airlines and All Nippon Airways. You can also fly in via Seoul on the Korean Air or Asiana Airlines. Delta Air Lines, United Airlines, and American Airlines have flights supplying to many destinations in the US and Asia. It is one of the most convenient options to visit Japan from almost all parts of the world through global destination connectivity.

International ferry services to Japan are accessible from China, Korea, Taiwan, and Russia. Busan-Osaka, Keelung-Ishigaki/Naha, Shanghai-Osaka/Kobe, and Russia to Japan via Sakhalin are some of the main ferries.

The airlines that go from India to Japan are Korean Air, Emirates, Air India, Singapore Airlines, Jet Star, Cathay Pacific, and China Airlines to name a few. There aren’t any non-stops. The most famous ones are 1 stop or 2 stops.

Further Read: Know The Best Ways Of INR To Yen Conversion Before Planning A 2020 Trip To Japan

If the details above have already got you excited, then plan your trip to Japan in September! Be a part of the events in September in this beautiful island nation. Enjoy thoroughly, taste authentic Japanese food, witness a bunch of locations and engage in a lot of exciting activities. Do share your lovely feedback with TravelTriangle! We hope this guide compels you to plan a trip today!

Q. Is September a good month to go to Japan?

A. Yes, late autumn i.e. from September to November is generally the best time to visit Japan when there is little rainfall, skies are clear, and temperatures are mild too.

Q. What is the perfect season in Japan in September?

A. Japan has four distinct seasons and each season has very different temperatures and climates. September to November is the autumn season in Japan.

Q. Is Japan really a cold nation in September?

A. No, Japan is not really cold in September. The average temperatures drop throughout Japan in September which is normally considered to be the last month of summer.

Q. What are the best things to do in Japan in September?

A. The best things to do in Japan in September include Fukuro Matsuri, Rally Hokkaido, Hibiya Oktoberfest and several other activities of local connotation that will keep you hooked.

Q. Is Japan an expensive country?

A. Japan is considered one of the most expensive countries in the world. And, if you’re eating out, staying in hotels, and travelling around a lot, it can be. You can easily spend over $200 per day by itinerant that way.

Q. Is Japan humid in September?

A. Average high and low temperature of Japan during September is 81 F, and 70 F respectively. Due to humidity in Japan, September temperature might feel hotter up to certain extent.

Q. What to wear in Japan in September?

A. You can wear Wide-leg pants, higher neck t-shirts, and blouses, sneakers, poncho, yukata, tenugui, etc. in Japan in September.

8 Fascinating Things To Do In Vadodara In 2020 That Let You Taste The Good Life In Gujarat!

Top 8 Restaurants In Kodaikanal That Will Relish Your Taste Buds