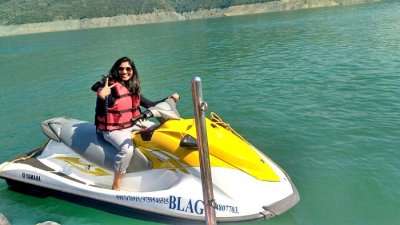 Nestled in the upper reaches of the Himalayan range, Kanatal stands tall at a height of 8500ft above sea level. Read on as Kalpana unravels her 1 night/2 day weekend trip to Kanatal that covered the beauty and admirable backdrops that is certain to be the jealous of all.

I got to know about TravelTriangle weekend getaways while browsing on Facebook. I chose Kanatal out of the options available, as I had already been to the rest of the places offered by TravelTriangle for the particular weekend. Javed from TravelTriangle guided me through the booking process, making sure that everything went smoothly.

A much needed break from the hectic work schedule was on the cards. Along with the excitement, also came a bit of anxiety as it was the first time with TravelTriangle

I boarded the bus at 10 pm from Akshardham metro station. It didn’t take long before all the travelers were introduced to each other. With the gelling together of people, the trip became easier.

We arrived in Kanatal at 8.30 am and checked into the Camp Carnival Resort. The rooms at the resort were pretty neat and comfortable. As we had our breakfast soon after, the arrangement for food seemed brilliant.

Suggested Read: Weekend Getaway To Kanatal: Things To Do On A Solo Trip

Post breakfast, we did some adventure activities inside the camp which included rock climbing and firefox. A few of us skipped rappelling due to tiredness.

After lunch, we paid a visit to the Surkanda Devi temple via bus. From the drop off point, the temple was a two-kilometer uphill trek. An hour later, we reached the top of the hill and the view was incredible. We caught our breath, clicked some pictures, and enjoyed the stunning panoramic view of the mountains before heading back to our campsite.

We arrived in Kanatal at 7 pm and got ready for a bonfire dinner party. We had a gala time at the bonfire party. We enjoyed the night by singing songs, having good conversations, and devouring on some good food and drinks. I went back to sleep at 1 am.

The campsite in Kanatal had an efficient staff which made sure the resort ran like clockwork. Everything right from the rooms, facilities, activities, to the food was nicely arranged.

The next day, we had breakfast at 9 am and got ready to check out from the resort in Kanatal at 10 am. On our way back home, we stopped at the Tehri Lake and Dam for some sightseeing.

At the lake, we got a chance to do some jet skiing. Thanks to the superb bargaining skills of Javed, we got his price down to 180 rs per person for one round of the entire lake on the jetski. Afterwards, we stopped at a local dhaba nearby for lunch at 2 pm. An hour later, we started our journey back to New Delhi. We arrived back in Delhi at midnight.

A weekend that drained out my stress and added perspective to my life. I felt really happy after having discovered a new place, having met new people, and having undertaken yet another journey for my travel credentials.

6 Best Cottages In Kanatal To Make Himalayan 2020 Sojourn A Memorable One!

40 Thrilling Weekend Getaways From Kolkata You Must Visit In 2020

15 Best Weekend Getaways From Calicut To Make Your Week End On A Good Note In 2020!

13 Best Weekend Getaways From Visakhapatnam That Offer A Rejuvenating Break In 2020!