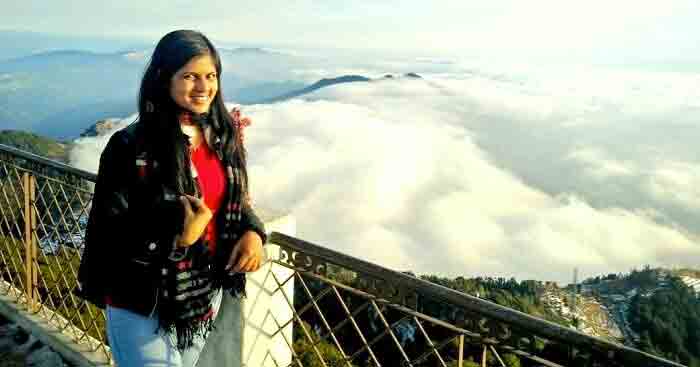 Seeing snow for the first time is indeed a magical experience. Shweta describes her ultimate winter experience that made her fall in love with the weather, nature and the mountains all over again. Unexplored treks, new friends, and a holistic travel experience made her weekend trip to Kanatal memorable.

After having missed snowfall in the mountains for the past few years, this time I promised myself to catch the snowflakes in the Himalayas one way or another. I saw an ad of TravelTriangle on facebook promoting their republic day weekend getaways. I inquired about the weekend trip to Kanatal as it was a new destination for me that was experiencing snowfall.

Suggested Read: Weekend Getaway To Kanatal: Things To Do On A Solo Trip

The expectations from TravelTriangle were high as my previous group trip with them to Kasol was a memorable experience. Going with a bunch of new travelers was an exciting prospect to add on to the adventures Kanatal had in store for us I quickly booked my package as soon as I was explained the details of the trip on phone by their travel representative.

We were asked to assemble at Akshardham Metro Station to board the bus to the weekend trip to Kanatal. All 23 of us boarded the bus along with the TravelTriangle coordinators, and the journey began at 10 pm. The coordinators did a really good job of introducing the travelers to each other so that everyone could feel comfortable in each other’s company.

We arrived in Kanatal at 7am and checked into Camp Carnival. It was a chilly morning as we entered into the camp, which was covered with a blanket of snow. The first few hours of the morning was tough for the resort staff as pipes were frozen and arranging water became tough.

Post breakfast, we rested for a while and then assembled outside our tents in the camp grounds. We were taken towards our adventure sports in Kanatal. The entire group went ahead with an adventurous session of rock-climbing and rappelling. Post this, we had lunch and proceeded to Surkanda Devi temple for some sightseeing in Kanatal.

One can reach the temple via road or by foot. I, along with other trekking lovers, chose to take the hour-long trek uphill to reach the temple. At 5 pm, we arrived, and admired the magnificent 360-degree view of clouds below us like a sheet covering the mountains. On our way back, we saw the beautiful sunset and arrived back at the hotel at 7 pm.

In the evening, we headed to the bonfire area and enjoyed dinner with the fellow travelers soaking in the heat, and having a gala time. With light songs playing, and interesting conversations all around me, I ended my day at midnight and returned to my tent.

On the final day, we got up early morning, had breakfast and checked out of Camp Carnival. On our way back to New Delhi, we visited the Tehri Dam. The dam was very picturesque and we took plenty of photos of people and the surroundings. Afterwards, we went ahead with our return journey and arrived in Delhi at 8 pm.

Having finally seen snow after a long wait, I felt like I belonged there. I savored every moment of this short trip to Kanatal and I believe it will be a launchpad for me to go on multiple travels. The choice of preferring mountains over beaches felt vindicated upon seeing the hidden beauty in store in Kanatal.

Many more scenic unexplored treks await you. Book your weekend getaway now to enjoy the pristine nature of the Himalayas.

18 Best Places To Visit Near Agra For A Weekend Getaway In 2021!

3 Girls, INR 3000 And One Wonderful Trip To McLeod Ganj! #HacksIncluded