Kanha National Park 2022: Off To The Home Of Jungle’s Fiercest Predator 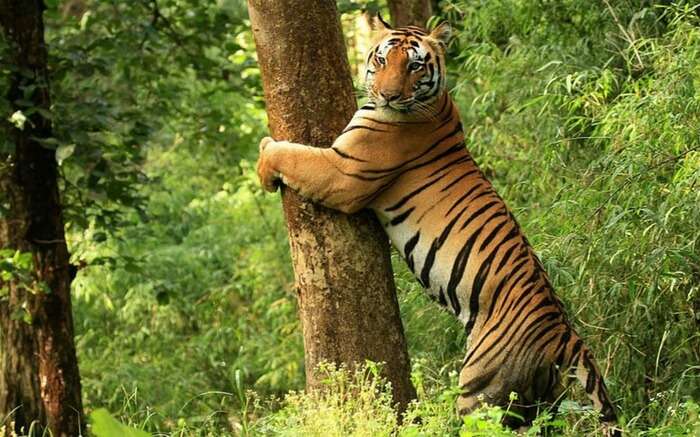 Nature has inspired people to achieve extraordinary feats. When Rudyard Kipling wrote the famous novel ‘Jungle Book’, he needed an inspiration, which came from one of the tiger reserves in India. Apparently, it also happens to be the largest among national parks in Madhya Pradesh. Kanha National Park, in Central India, is India’s one of the oldest national parks that boast of rich tiger population and other exciting wildlife.

The national park, spreading over 940 sq km, spans over thick grassland and is home to rich flora and fauna. Kanha has altogether 4 zones with 3 entry gates to let you into its vast span. Watch the wildlife from close quarters, click the pictures of birds flocking past or make the best of holidays by spending wonderful moments in the exotic forest lodges, Kanha has a lot to offer. 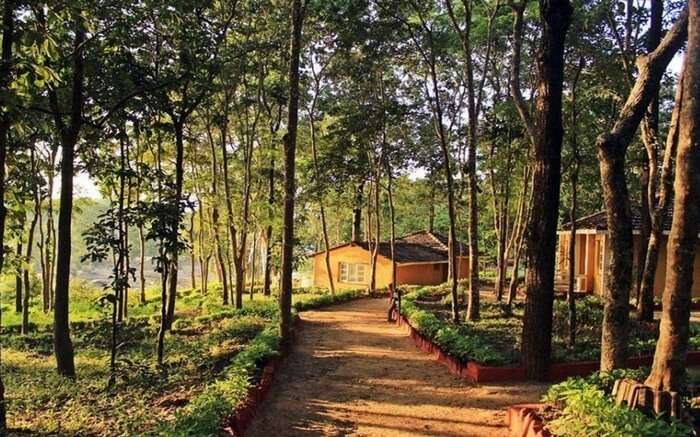 October to June is the best time to visit as summers in Kanha becomes too hot to handle. The conditions aren’t ideal for a safari ride. The park remains closed from July to Mid-October because of monsoon.

Must Read: 20 Tourist Places Near Indore To Experience The Magic Of Madhya Pradesh In 2022

One of the most prominent national parks in India, Kanha National Park must be in everyone’s Madhya Pradesh itinerary. Listed below are some of the major highlights of this national that you must witness. 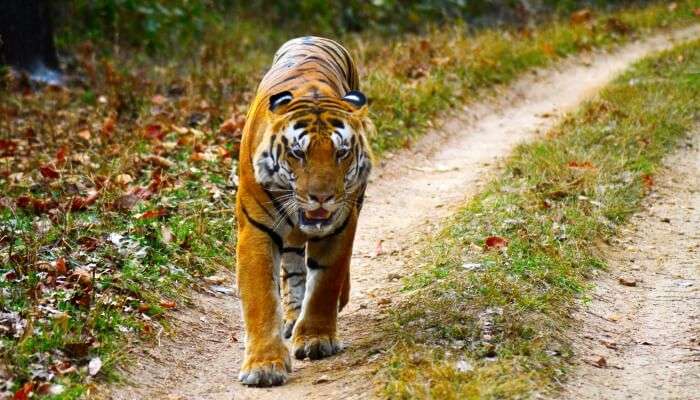 Kanha National Park is essentially known  one of the most prominent tiger reserves in the country. You’ll get to witness the Bengal Tiger apart from other animals. Encountering a tiger during your safari will certainly be an experience you’ll never forget. This is what makes Kanha National Park one of the best wildlife sanctuaries in Madhya Pradesh.

Suggested Read: Monsoon In Madhya Pradesh: 5 Best Places To Visit In The ‘Heart Of India’ In 2022 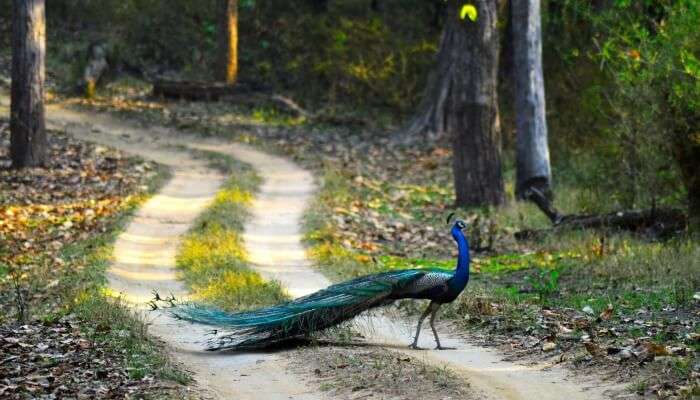 There are about 300 species of birds that can be spotted in this national park. The dedicated bird watchers as well as photographers will definitely have a splendid time here. You’ll get to encounter birds like cuckoos, bee-eater, rollers, woodpeckers, warblers, rock pigeons, partridges, hoopoes, green pigeons, spurfowl, and many others.

Suggested Read: 16 Enchanting Waterfalls In Madhya Pradesh That Are As Refreshing As The Rain In 2022! 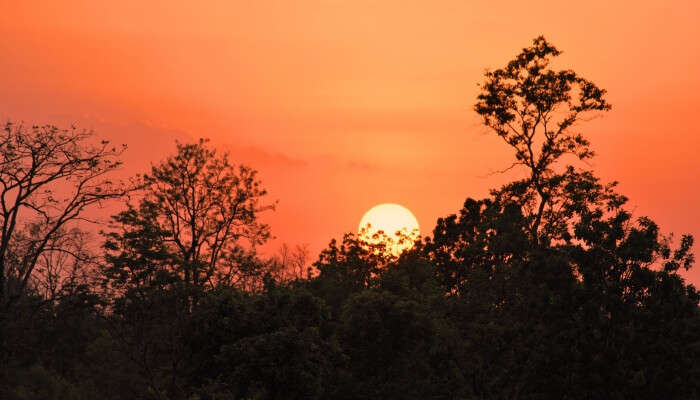 Watching a sunset in this naturally wonderful national park is nothing less than a blessing. Bamni Dadar is considered to be the sunset point in this national park and it is from here that you get to witness an awe-striking panoramic view. It is also the last spot that you reach during safari.

Suggested Read: 7 Best Places To Visit In Madhya Pradesh In June To Roll In Summers Like A Pro

There are 4 popular zones in Kanha National Park. Although the entire national park area is famed for tiger sightings, every zone has its own specialty. The national park region borders the best of Vindhyas and Satpura range located across Central India. Famed as India’s second national park, Kanha has been successfully managed by the Madhya Pradesh tourism and over the period the national park area has been distributed to ensure that tourism functions properly in the park area. 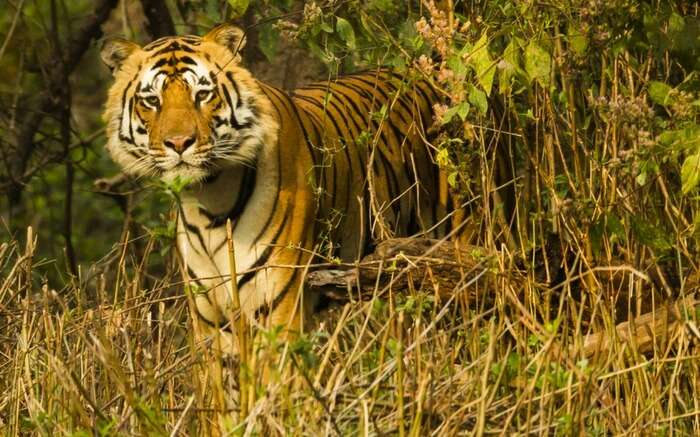 This was the second zone that came into the operation after Kanha Zone. Easily accessible from Raipur and Gondia towns. Mukki is 45 km from Kilsi Safari Zone. It is also known to be one of the oldest safari zones in the national park and is therefore frequented by those who love the wildlife.

2. Kisli Safari Zone – A Mystic Morning Safari To Start With 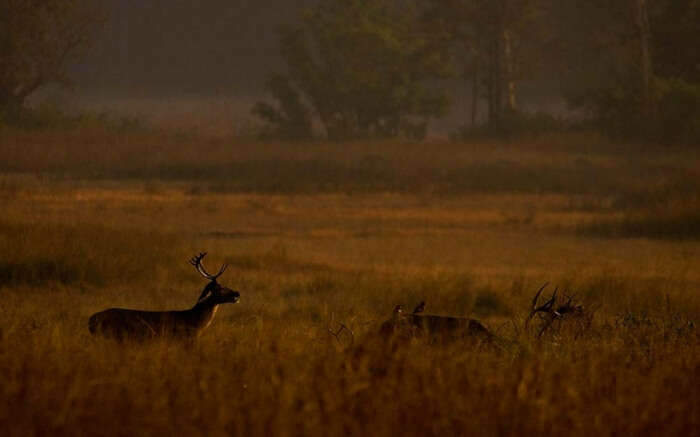 Kisli Zone was the last one to be introduced. The zone is widespread with parts of it bordering Raipur area. Kisli village is located close to the Khatia Gate also known as Kisli gate. Till 2014, this zone formed a part of Kanha Zone and after it was separated. The forest region that lies in this zone seems to be quite picturesque. 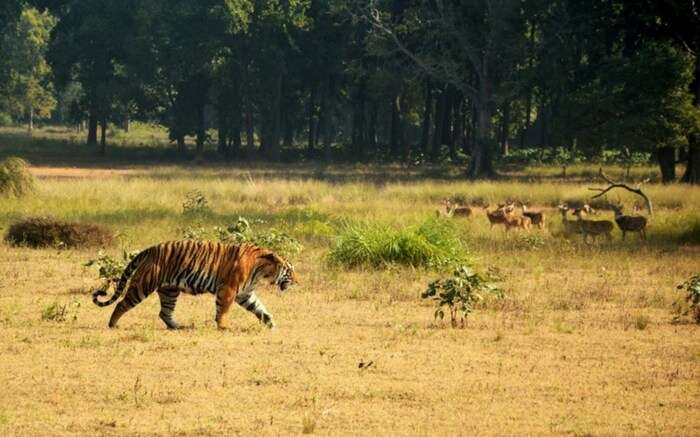 Sarhi Zone was the third one to be introduced by the forest department to distribute the inflow of tourists visiting the national park area. This safari zone was established after the establishment of Kanha Zone and Mukki Zone. Since this zone is comparatively new, tourists didn’t consider coming here for safari. However, now it is equally important as the other zones. 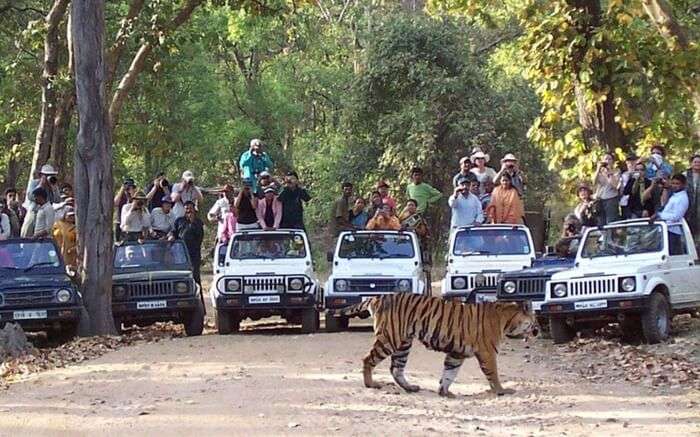 Kanha Safari Zone is the oldest of them all. Considered as the premium safari zone, Kanha’s entry fee is higher than other zones. Currently, Kanha Zone lies between the central and western regions of Kanha National Park. There are a number of attractions in this zone that one must visit – Kanha Meadows, Shravan Tal, Kanhari Camp, and Nakti Ghati.

Suggested Read: 40 Tourist Places In Madhya Pradesh That You Should Be Visiting In 2022

Things To Do In Kanha National Park

Listed below are some of the best things to do in Kanha National Park. You should definitely try these activities in order to make your visit worthwhile.

1. Elephant Safari – Privilege To Watch Jungle While Riding An Elephant 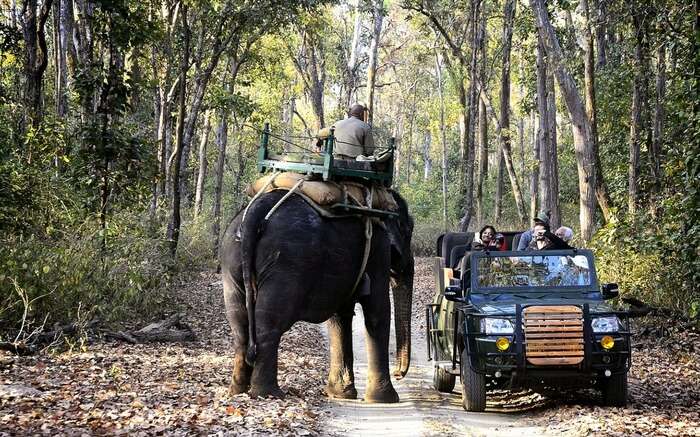 Watch the dense jungles of Kanha National Park by sitting on the back of an elephant. Elephant safari is a luxury for anyone who has booked a full day jeep safari or someone who has planned a wildlife photography or filmmaking stint in the park region. The cost of elephant safari is usually on the higher side.

2. Tiger Safari – Catch The Beast Unaware In Its Habitat 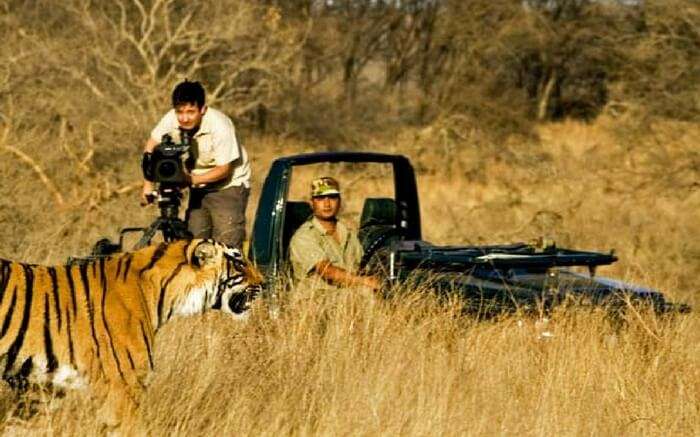 Known for frequent tiger spotting, Kanha National Park safari is the apt way to savor the best of nature and watch the big cat roam around in the jungle. The jeep safari experience is considered to be one of the best experiences you can undergo during your visit to the national park. 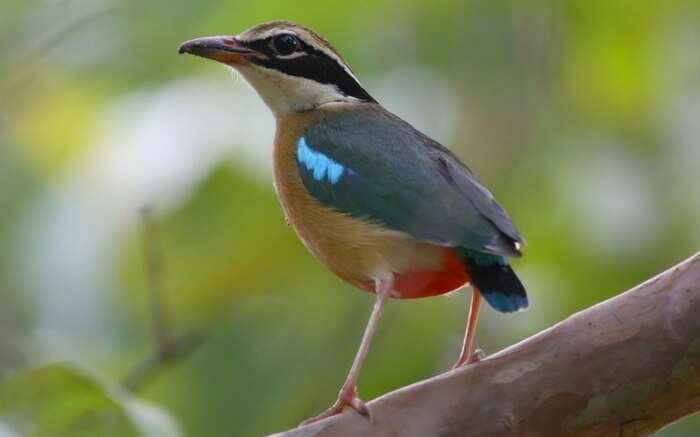 Given that Kanha National Park region boasts of some rare bird species in the park region make bird watching an exciting and engaging activity to go for. Go out and capture the colorful birdies fluttering around in their natural habitat. It’s a colorful world out there in the Kanha National Park.

Places To Stay In And Around Kanha National Park

Kanha National Park is known for wonderful stays, rustic stays, elegant retreats, and budget huts. Depending on your requirement, there are Kanha National Park hotels and lodges in & around the national park area to make your stay a memorable one. Forest guest house and cabins are located at the entrance of different zones in the national park. Log huts by MPSTDC (Madhya Pradesh State Tourism Development Corporation) are also considered as cheap and best option. 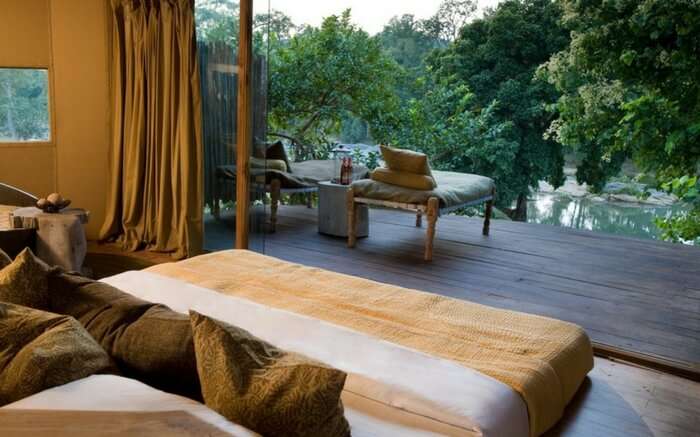 2 camps with 9 elegant suites, tented seating area, swimming pool, a wonderful kitchen, and hush environs make the highlights of this classy property by Taj. A stay here would leave you enthralled. Covering a land of around 90 acres, Banjaar Tola will make your visit to this national park memorable.

Suggested Read: Top Destinations For A Safari Honeymoon In India Brace yourself for some elephant sighting as you take a trip to this part of Kanha National Park. Wildlife viewing, luxe stay nestled in the heart of the jungle, and good North Indian food makes a stay worthwhile here. The staff will attend you with utmost hospitality – you really can’t ask for more. 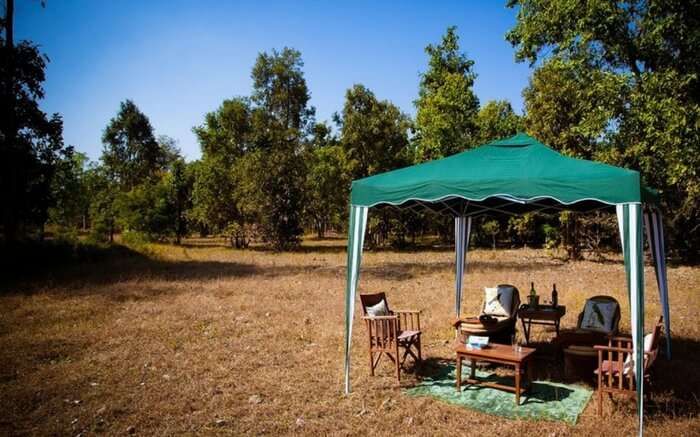 Village walks, Padgdandi bicycling trips, excursion to Phen Sanctuary, meadow spa, and much more await you at Singinawa Jungle Lodge. Behold the best of the wild from the close quarters. This lodge is known for its quality services and has even been awarded for its hospitality.

Suggested Read: 20 Tourist Places Near Indore To Experience The Magic Of Madhya Pradesh In 2022 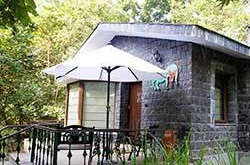 Organised jungle safari, spa, elegant dining, and beautiful ensembles put Tuli Tiger Corridor atop the list of top Kanha National Park hotels and resort options. This is the ideal place to stay, especially when looking for a serene and peaceful location for accommodation. 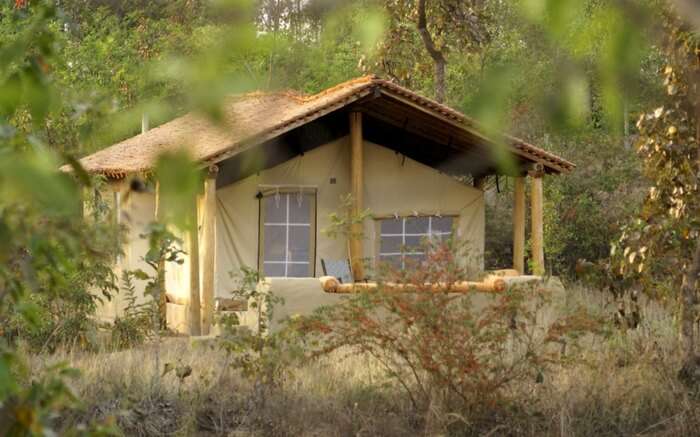 Village-to-village bicycle tour, village markets, rustic trails, and exciting jungle safari! A stay at Shergarh Tented Camp means your priorities are in for a momentous stay at India’s one of the leading national parks. This is a great safari camp that simply feels like home to the guests.

How To Reach Kanha National Park 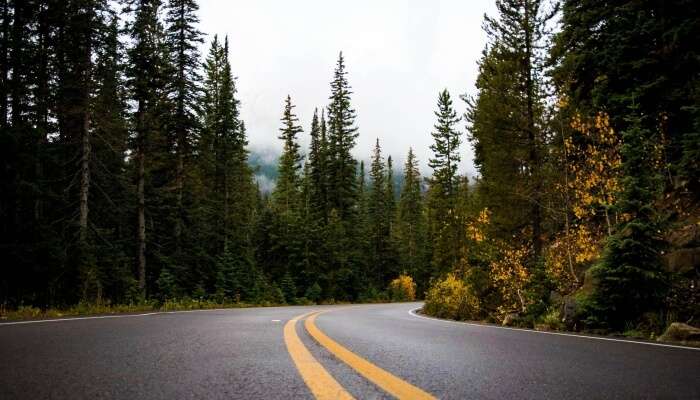 By air: Jabalpur is the nearest airstrip to Kanha National Park well connected with major Indian cities. Hire a cab to cover the rest distance from the airport to the national park.

By rail: Gondia Railway Station, at a distance of 145 km, is the nearest railhead from Kanha. Cover the remaining distance by road in a cab.

Life in the wild is so engrossing & a trip to Kanha National Park could be the best opportunity for you to explore the best of wild and free. Plan a trip to Madhya Pradesh now!

What is Kanha National Park famous for?

Kanha National Park is known for its flora and fauna. There are various animals you can spot here, including Bengal Tiger, swamp deer, Indian wild dog, and 300 species of birds.

How many tigers are there in Kanha National Park?

There are around 500 tigers in Kanha National Park and this is why it is famously referred to as one of the best tiger reserves in India.

How do you reach Banjaar Tola?

Reaching Taj Banjaar Tola is not a task. It is located at a distance of 150 kilometers from Jabalpur Railway Station as well as Jabalpur Airport. A cab will be easily available for you to cover that distance.