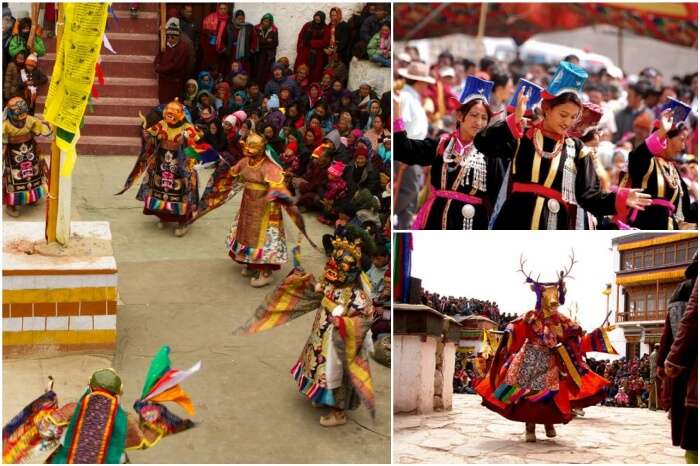 India is a land of diversities and the variety in food, culture, and festivals here makes the country an exciting proposition for explorers. To many, Ladakh is just a land enveloped by snow-covered peaks and daunting passes. But what they don’t know is that there are customs and festivals of Ladakh that are alluring as well. Know when can you be part of these traditional celebrations, and plan your trip to Ladakh accordingly. There is surely a lot to see and experience on your trip to the north this year, so do not forget to carry your camera along.

Ladakh is known for its interesting festivals and colorful celebrations. Let’s peep into the 10 most popular Ladakh festivals 2020 to know all about the rich and colorful culture of the land of high passes.

One of the most popular festivals of Ladakh is Losar – a medley of cultural events, rituals, and performances. Holy fire, the chant of mantras, and colorful robes set the tone for the celebrations for the Losar festival in Ladakh that falls mostly in the month of December as per the Tibetan calendar.

Key attractions: Stage fight between the good and the evil, ibex deer dance

Must Read: 15 Winter Festivals In India You Must Attend

Where: Banks of river Sindhu at Shey Manila in Leh

Sindhu Darshan celebrated on Guru Purnima, is another vibrant extravaganza of Ladakh. Through this festival, the natives commemorate the Indus River as they believe that the river plays a key role in maintaining harmony and unity among various ethnic groups and communities of India.

The 3-day festival is also a way of paying respect to the brave Indian soldiers who endanger their lives to save ours. Which makes

Hemis Tsechu is another of the most awaited festivals in Ladakh that stretches over two days. It features a series of mask dances by the lamas of Hemis monastery and concludes with a sacrificial offering on the last day.

Key attractions: The highlight of the festival remains colorful masks and fine silk costumes worn by the dancers that represent guardian divinities to which Hemis belongs. Every dance move has relevance and depicts the magical feats of Padmasambhava – an 8th-century Indian Buddhist master – in his eight manifestations to defeat the enemies of Buddhism.

Suggested Read: 10 Homestays In Ladakh: The Finest Gems Of Ladakhi Hospitality And Traditions

Ladakh festival is one of the most popular festivals in Ladakh that showcases the cultural diversity of various regions. Performers come from all parts of Ladakh and celebrate with utmost joy and opulence. Displaying a wide array of dance programs, traditional music performances, and colorful robes all around, Ladakh festival makes for one of the must-attend festivals of Ladakh.

Spanning over a duration of almost two weeks, the festival comes to an end at the polo ground in Leh. During this time, the religious procession crosses over from one monastery to the other, as people dance and celebrate the harvest season.

P.S. If you’re a photographer or a culture enthusiast, we suggest at least stay to see a week of the 15-day celebrations. For a comfortable stay, find a budget option among hotels in Leh Ladakh.

The mystical beauty of Lamayuru monastery accompanied by the celebration of Yuru Kabgyat makes it a prime attraction for travelers in the month of July. It is a 2-day Leh Ladakh festival that brings together the people of Lamayuru where they imitate the teachings of Tibetan Buddhism by singing and dancing in a traditional pattern.

The highlights of these dance dramas are the religious teachings of Buddha, and colorful ethnic garments donned by the monks during the festival.

Key attraction: The sacred ritual of the demolition of the statue to mark the liberate the inner demons is the highlight of the festival.

Suggested Read: 8 Experiences That Make Ladakh In May A Heartwarming Trip

Phyang Tsedup festival commemorates the teachings of Lord Buddha through festive celebrations. Monks don bright and colorful silk costumes, perform the sacred mask dance and offer prayers. Dramas or ‘Chhams’ are performed to instill the teachings of Buddha amid high spirits and cheerfulness.

Followers also perform a pilgrimage to Thangka of Skyabje Gombo, which is considered an important ritual of this Leh Ladakh festival.

Key attraction: Display of paintings inside the monastery

Must Read: Ladakh In April: When Your Adventurous Heart Yearns For The Himalayas!

Where: Monasteries of Thiksey, Spituk, and Karsha

When: Different months for each monastery

Gustor is transliterated as ‘sacrificing the 29th date’. The 2-day festival starts with chants and charms offered to god by the monks residing at the monastery. This is one of the much loved Ladakh festivals that reinstates the fact that all bad things must come to an end.

Key attraction: The second day comprises of the sacred ritual performed by the ‘Black Hat Dancers’ and a dough cutting ceremony of the sacrificial cake. It marks the end of the festival proceedings.

Where: All over Leh, Likir, Diskit monasteries

Started by Ladakh royals, the Dosmoche is a popular festival of Ladakh that is celebrated to ensure the safety and well-being of people living there. It is a congregation of Ladakhis masked in a fancy disguise and performing the sacred dance together. The festival goes on for two days.

Key attractions: The lamas from monasteries who are the experts in tantric practice and astrology prepare Thread Crosses – an offering that is believed to drive away all the evil spirits and demonic forces

9. Matho Nagrang: Of Oracles And Their Blessings

When: March; on the fifteenth day of the first month of the Tibetan calendar

Matho Nagrang is a two-day affair that sees monks dressed like various Ladakhi God and Goddesses. Their attire comprises silk robes and masks.

Matho Nagrang is a huge attraction among locals as it sees the return of two oracles who spend a month meditating in isolation. They are accompanied by masked dancers as they make their coveted appearance.

Key attractions: The return of the monks and the performances

Suggested Read: Ladakh In April: When Your Adventurous Heart Yearns For The Himalayas!

Where: Stok and Spituk monastery

When: February-March; one week prior to Matho Nagrang festival of Matho Monastery

The pride of Stok monastery, Stok Guru Tsechu is a 2-day celebration that begins on a ninth day right after the Tibetan New Year, which is why it is such a popular festival of Ladakh. Prayers, dance (Cham by Lamas), music, and food are common sights during the festival, and unlike other monasteries, most of the rituals are performed by the common people.

Key attractions: Pretty much on the lines of Matho Nagrang, the key attractions of Stok Guru Tsechu are the two commoners chosen by Lamas, who are properly cleaned and prepared to receive the spirit of the deities. Masked dances by the priests add to the frolic.

Where: All over Ladakh

Being one of the famous festivals of Ladakh, Saka Dawa is observed as the holiest Buddhist holiday. It is celebrated every year during the fourth month of the Tibetan calendar, which is believed to be the time of the birth of Buddha and his attainment of Nirvana.

Key attractions: During the festival, people can be seen reciting mantras, doing sadhanas, and protecting animals for the prestigious enlightenment of Sakyamuni.

Where: In Tak Tok Gompa, Leh

One of the main festivals of Ladakh, Tal Tok is a must-see celebration. It is celebrated at a cave of the Tak Thok Gompa in Leh on the 10th day of the 5th month. You can witness a lot of cultural programs throughout the day and end the evening with a well-organized feast. Do wear ethnic clothes this day if you wish to experience it like a local.

Key attraction: The day witnesses the dance of the lamas, mask dances, and the religious offerings made to the lord.

Further Read: 11 Best Things To Do In Ladakh That You Can’t Afford To Miss!

Leh-Ladakh isn’t just about mesmerizing escapades and imposing mountain frontiers in the north. Rather it’s the contentment and celebration of every day of existence that comes naturally to them. Go on and seek happiness in the festivals of Ladakh on your next trip! Plan your trip to Ladakh with TravelTriangle now!


Q. What is the national festival of Ladakh?

A. The Saka Dawa Festival is the main festival of Ladakh. It is considered to be the holiest Buddhist holiday in this place.


Q. What is Ladakh famous for?


Q. What is the food of Ladakh?


A. The staple food of the Ladakhi people is mostly comprised of Sku and Thukpa (made out of wheat flour), Pava (made from sattu) as well as Khambir (local Ladakhi bread). The natives also consume a lot of meat (mutton and chicken) to combat the cold climate.


Q. What language do they speak in Ladakh?


A. Bhoti (or Bodhi) is the official Ladakhi language. It’s essentially a Tibetic language that is spoken widely in the Ladakh region of India. Hindi is also widely spoken here, so Indian tourists would not have a problem with communication in this region.


Q. What is the culture of Ladakh?


A. Ladakh has a rich and colorful culture that is centered around their belief system and the practices of Tibetan Mahayana Buddhism, which happens to be the predominant religion here. You’ll find the roots of the purest traditional Tibetan societies here since China’s invasion of Tibet in the 1950s. Try to attend any famous festival of Ladakh when you’re here to understand its culture better.


Q. What are the festivals of Ladakh?


A. Some of the most famous festivals of Ladakh include:


Q. What is the famous festival of Ladakh?


A. Losar and Saka Dawa are two of the most famous festivals of Ladakh.

Magnetic Hill In Ladakh: A Handy Guide To Unravel This Mystery In 2020!

Leh Ladakh Bike Trip 2020: Everything You Need To Know From The Scratch!

Kala Ghoda Art Festival: An Ode To The Art, And The Creative Minds Of The World!