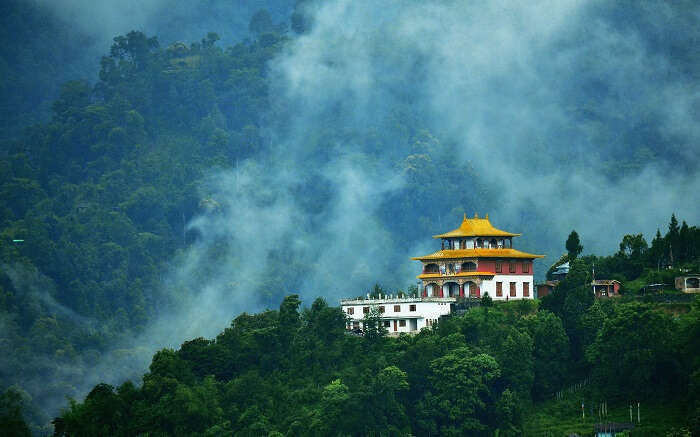 Sikkim is extra-special! For it is here the air breathes peace and folks live in harmony. Mountains sing lores of legend. And, amidst them lie the ancient monasteries, echoing with holy chants. These Buddhist monasteries in Sikkim are special not just because they are scenic and immersed in the soft aroma of alpine but also because of the great legacy they carry. Behold them for the fine architecture, ancient existence, and incredible surroundings, as these monasteries would leave you awed.

Perched atop the mountains most of these Buddhist monasteries in Sikkim are scattered across the length and width of the state. A majority of these monasteries belonging to the 17th and 18th century stand wearily today, tested by time and toughened by the weather conditions in the mountains.

Here is the list of famous monasteries in Sikkim that you can consider visiting when you travel to the Northeast next time. Take a look!

Image Source
Established way back in 1701, Dubdi is one of the popular monasteries in Sikkim. Belonging to the Nyingma sect from Tibetan Buddhism, this monastery enjoys an amazing hilltop location. Treacherous path and dense alpine guard the pretty monastery that must be visited by every traveler looking for popular attractions in Sikkim.

Perched atop 6,900 meters, this beautiful creation bears the statues of three lamas. The 2-storied stone architecture of the monastery is rather fine and there is a bell-shaped structure atop the roof is remarkable for its positioning known as Gyaltshen.

Special attractions: Kartok Monastery and Tashiding Monastery, Norbugang Chorten, Tashi Tenka, and Khangchendzonga National Park are some of the must-visit places nearby

How to reach Dubdi Monastery: Dubdi Monastery is a 3 km walk from Yuksom. Yuksom can be reached by a shared Jeep or government buses that run from Geyzing or Pelling. These places are located almost 2 hours away from Yuksom. One can also take a private cab to reach the monastery. Pelling and Geyzing are accessible from Bagdogra and Siliguri. Both these cities are well connected with major Indian cities.

Must Read: On A Solo Trip To Sikkim, Krishna’s Lens Captured The True Beauty Of The Himalayas

Suggested Read:Check Out This Itinerary Of Sikkim Tour For Couples For A Hassle-Free Vacation!

2. Enchey Monastery: At A Walking Distance From Gangtok

Image Source
Dating back to 200 years, the Enchey Monastery is located 3 km to the northeast of Gangtok. Enchey’ translates to solitary which is aptly justified by its location. The monastery belongs to the Nyingma of Vajrayana Buddhism. The location is truly embellished by nature’s grandeur. Special prayers are held at the monastery during the lunar month every year, which according to Tibetan calendar takes place in January and February.

Special attractions: Chaam – a religious dance performed by masked dancers during the celebrations in the lunar month

How to reach Enchey Monastery: It takes a 10-minute taxi ride from Gangtok city to reach the monastery

Suggested Read:15 Best Hotels In Lachung To Answer The Call Of Mountains In The Best Possible Way!

3. Kartok Monastery: The Most Picturesque Of ‘Em All

Image Source
Located opposite of Kartok Lake, the Kartok Monastery is the pride of Yuksom village. Hundreds of travelers flock to marvel this beauty in the northeast which bears red color. Yellow and golden motifs depicting Tibetan design can be found all over the monastery exteriors. One of the popular sites to visit in Yuksom the Kartok forms a great combo with Dubdi and Ngadak Monastery. Slow chants and fluttering prayer flags, and the beautiful Lake Kartok nearby makes it an awesome spectacle for the nature lovers.

Special attractions: Kartok Lake, the stunning landscape around the monastery, and fossils near the lake

How to reach Kartok Monastery: Yuksom can be easily reached from places like Pelling and Geyzing

4. Lingdum Monastery: Easy To Get To From Gangtok

Lingdum Monastery lies in the East Sikkim some 20 km from Gangtok. The monastery has been a preferred location for the Bollywood filmmakers, thus making it one of the popular monasteries in Sikkim. Lingdum, also known as Ranka Monastery, is the most recent monasteries of them all, completed in 1998. The monastery makes for the perfect place to spend some moments of solace in the company of divine intervention. Surrounded by forested mountains, the monastery is truly a photographers delight among other monasteries situated in Sikkim.

How to reach Lingdum Monastery: The monastery can be easily reached by a private vehicle from the capital city.

Image Source
Plana trip to Pemayangtse Monastery between March to June to experience the place in full glory. This is one of the oldest standing monasteries in Sikkim thronged by travelers year-round. Pemayangtse translates to Perfect Sublime Lotus and the place flourishes under the clear blue sky. The interiors of the monastery are noticeable with all the Tibetan motifs and designs on the walls and pillars.

The 300-year old monastery makes the perfect place to do some soul searching and indulge in prayers and meditation. Rich architecture, stunning mountains in the backdrop, and friendly Buddhist followers inside the temple would certainly make your trip to one of the oldest monasteries in Sikkim worthwhile.

Among many other monasteries that dot the pious land of Sikkim, Phodong Monastery, belonging to the Kagyupa Sect in Buddhism, is a popular attraction and a major monastery in Sikkim. Founded by Gyurmed Namgyal of Kagyupa Sect, the monastery stands at 4,500 feet above sea level. The monastery is well adorned with the paintings, murals, and holy scriptures from ancient times, making it one of the best monasteries in North Sikkim.

Suggested Read:15 Top Things To Do In Sikkim For Unbeatable Adventures In Breathtaking Landscapes

The intention was to make this one more accessible than the previous one located 13 km from Ravangla. The monastery is also popular because of the fact that it hosts Pang Lhabsol – a popular festival in the region, every year. Kagyed Dance performed by the monks during the festival makes for the highlight.

How to reach Ralong Monastery: Bagdogra (112 km) is the nearest airport while New Jalpaiguri(107 km) is the nearest railhead to Ravangla. From Bagdogra and Siliguri taxi are available for Namchi. Namchi to Ravangla is 22 km which can be covered in a private or shared vehicle. The last leg of 6 km from Ravangla to the monastery has to be trekked.

Fed by the thrills of the mountainous terrain, Rumtek Monastery in Sikkim that makes for an ideal site for nature. Located 23 km from Gangtok, the 3-storied monastery lies to the opposite of formidable mountains. To reach the main gompa from the main gate one has to walk a distance of half a kilometer. Vantage points from the monastery would charm you and the fine architecture would leave you fascinated.

This monastery is located in Rumtek, a place which is 23 km from Gangtok town and in the opposite mountain. So if you visit Rumtek, there are vantage points from where you get amazing sights of the whole Gangtok town on the opposite hill. However from the gate at the base, it requires an uphill walk (about half a kilometer) to reach up to the main monastery. One of the largest monasteries in Sikkim, Rumtek belongs to the Kargyu sect and was built by Gyalwa Karmapa in the 1960s.

Suggested Read:Monsoon In Sikkim: Explore The Unexplored Beauty Of Sikkim This 2020!

9. Tashiding Monastery: Adorned By Nature From All Sides

Image Source
Snow-capped peaks and rustic charm prettify Tashiding Monastery. Popular among travelers from all over the world this Sikkim Buddhist monastery truly reflects the old world charm. There is a pot of holy water kept inside the temple which is considered auspicious and is used only during the festivities.

With plenty of fluttering prayer flags and holy chants, the temple complex is a perfect place to spend some great moments in the lap of nature. A day at this one of the oldest and holiest monasteries in Sikkim will be perfect. The monastery houses close to 60-70 monks.

Special attractions: Inscription slab outside the monastery, Ravangla, and Yuksom

How to reach Tashiding Monastery: Located near Pelling, the monastery is around 40 km from Gyalshing and 30 km from Ravangla. Private taxis are available from all these major cities to reach the monastery.

The monastery came up towards the end of the 19th century and is one of the eminent structures in Sikkim. Popularly known as Tsuklakhang Royal chapel and Monastery is a popular religious spot for Buddhists from all around the world. The monastery is also important from a cultural point of view as it promotes and preserves the cultural heritage of the northeastern state. A trip to Tsuklakhang Monastery would also take you closer to the great glorious tradition of our nation.

How to reach Tsuklakhang Monastery: The monastery can be easily reached by a private vehicle from Gangtok (124 km). NJP is the closest railhead from Gangtok located 148 km far.

Further Read: 12 Old Yet Charming Monasteries In Bhutan Every Traveler Must Explore

Already excited to visit these monasteries in Sikkim? Not only you are just going to adore the views but the journey leading to some of these monasteries is rather more fascinating. So, get packed, plan your Sikkim vacay and leave right away as the stunning Sikkim beckons you!

Q. How many monasteries are there in Sikkim?

Q. Which is the oldest monastery of Sikkim?

A. Dubdi Monastery Is the oldest monastery of Sikkim.

Q. When was Tawang monastery built?

A. Tawang monastery was built in 17 th century.

Q. Where is the largest Buddhist temple in the world?

A. Borobudur temple at Magelang is the largest Buddhist temple.

20 Incredible Local Sikkim Food Options To Gorge Upon In 2020

Nightlife In Gangtok: Visit These Electrifying Nightclubs And Casinos In 2020!

19 Places To Visit In North Sikkim To Witness The Magic In 2020!