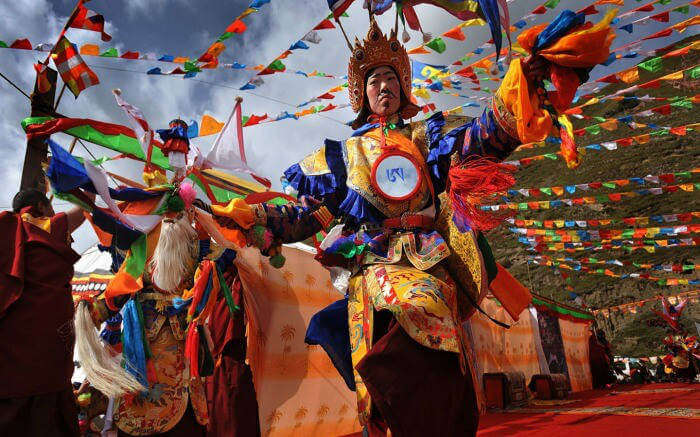 While the world welcomes new year in loud discotheques and concerts, Tibet has its own vibrant way of embracing Losar – the Tibetan new year – that falls in the month of February. The merry affair is an extravagant display of Tibetan traditions, customs, and beliefs blended with a lot of enthusiasm and excitement. It is also the time when farmers celebrate the harvest.

Here’s what Losar is all about and why you must attend this kaleidoscopic Tibetan new year 2017.

The Tibetan word Losar means New Year. Also known as Bal Gyal Lo, Losar celebrations include three days of revelry and merrymaking. It is a much-awaited event that features prayers, chanting, folk music, dance drama, and many other performances. The celebrations also include interesting competitions such as arrow shooting and horse-racing.

The grand festivities make for a wonderful holiday time for culture enthusiasts as well as photographers. It is also a good opportunity for solo travelers and families to explore the traditions and customs of Tibet. It is truly a delight to attend the spring new year and be a part of the Tibetan festivities.

People celebrate Losar with good food and new clothes, and by spending time with their family. Losar begins two days before the new year and ends on the first day.

The first day of Losar falls on the 29th day of the 12th month of the year. On this day, Tibetans clean their house and cook special dishes like soup with small dumplings. The monks in monasteries indulge in special rituals in order to prep up for the celebration.

Day 2: Gyalpo Losar – The last day of the Tibetan calendar

The last day of the year, and the second day of Losar is when Tibetans head to the monasteries for praying and offering gifts to the monks. Monasteries arrange religious celebrations while people dress up to enjoy them and have a good time.

At dusk, people celebrate with crackers and fire torches believing that this will scare away the evil spirits. The night is concluded with special reunion dinner, during which kapse (cake) and chang (alcoholic drink) are served along with other delights.

Day 3: Choe-kyong Losar – The first day of the Tibetan calendar

On the first day of Tibetan new year, people wake up early, bathe, and wear new clothes. They make offerings to the God that mainly include Torma (a dough figurine of animals and demons).

Prayer flags are hung on the hills and roofs, and juniper leaves & incense are burned. Families exchange gifts, gather for dinner, and have a gala time together. The custom of getting the year’s first bucket of water is also very significant. The housewives wake up before the sunrise and head to nearby well/river to fetch water. This is believed to bring good luck in the family.

Though the festival ends on this day, but the celebration lasts for 10 to 15 days.

The celebrations of Losar – the Tibetan new year – are concluded with the Butter Lamp Festival, locally called Chunga Choepa. The day is spent making butter lamps and placing them in different corners of the city. Towards the evening, lamas light up the lamps, illuminating the streets.

It is an enchanting view, when everything is bright and lit up, families get together, people dress up, and celebrate with good food and crackers – much like Diwali in India.

Surely, the best place in the world to behold the best Losar celebration is Tibet! But where in Tibet? We have the answer!

With gigantic beige hills, Shigatse is a busy and one of the largest cities in Tibet. Losar Festival celebration in this region comprises of keeping the houses clean, decorating doorsteps with new year paintings, eating gutu (a dough containing white stones, wool, charcoal and capsicum) , and indulging in many entertainment activities like horse-race, dance, and music.

Kongbo area too is an ideal place for celebrating Losar – the Tibetan new year. The style of celebrations is a little different from Shigatse region. On the last day of the year, people serve different dishes to dogs on a wooden plate, and on the basis of what a dog eats, they predict what will happen in the coming year.

Suggested Read: 10 Festivals Of Ladakh That Celebrate The Life In The Valley

Every year the dates of Losar change as per the Tibetan calendar. It is actually very similar to Chinese New Year, and sometimes the two fall on the same day. Dates for Losar for the next two years are:

Losar Festival is nothing less than a treat for a culture-vulture. If you are one, there is no way you can miss this new year extravaganza!

A. Tibetan New Year is a 15 day festival that begins from 29th December and continue till January. Tibetans perform a number of ceremonies over the days for purification and warding off the evil spirits.

Q. What does Losar mean?

A. Losar is the name of Tibetan New Year where ‘Lo’ means year and ‘Sar’ means new.

Q. Why do we celebrate Losar?

A. Losar is an important festival in Tibetan culture that signifies the beginning of the new year. Tibetans believe that the happiness of God and spirits will bless them with a prosperous New Year. It is also a festival of gratitude for harvest.

Q. Where Is Losar celebrated?

A. Losar is mainly celebrated in Tibet and countries with Chinese populations.

Q. What does Tashi Delek mean?

A. Tashi Delek is a Buddhist greeting associated with the festival of Losar. Though it is difficult to translate to the English language, it is interpreted as “May all auspicious signs come to this environment.”

Q. What is the Buddhist New Year called?

A. It is known by different names in different countries. In Thailand, Buddhist New Year is called Songkran.

7 Places To Visit In Asia In April For An Enjoyable Vacation!