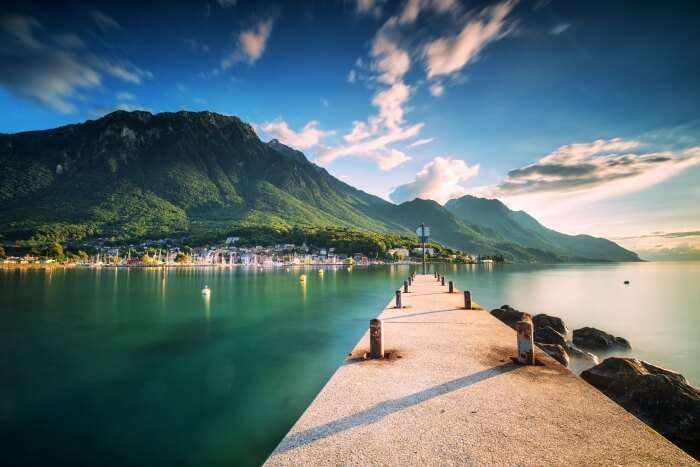 Do you like the feeling of wind in your hair? The rough terrain of European mountains is some of Earth’s most beautiful creations. They also happen to be a spectacular vacation choice. Mountains of Europe in particular, host a plethora of tourists all year round.

The rugged peaks alongside the sophisticated societies, make Europe an enigmatic dichotomy that simply needs to be visited. If you are an adrenaline junkie and are currently on the prowl for a new adventure, look no further! The mountains in Europe would make an excellent choice for an unforgettable journey of a lifetime.

Contrary to popular belief, most of the European continent has mild weather. Of course, personal preference in terms of favored weather, type of holiday and interest in activities must be factored in while choosing a season to visit.

Bordered by the Arctic ocean, Atlantic ocean, and the Mediterranean Sea, Europe is famous for its pristine snow-capped mountains: particularly, the Alps whose extensive range system spreads across eight different Alpine countries.

While visiting mountains, however, research is critical as the winter can be too harsh to handle for some. It is vital to know the weather and pack one’s bags accordingly:

In accordance with this list of mountains in Europe, Mount Elbrus holds the distinction of being Europe’s highest peak and the world’s 7th largest summit. It is one of the highest mountains in Europe. The range is sprawling, impressive and enough to fuel your ‘adrenaline junkie’ fantasies, in actuality are two dormant volcanoes, stretching from the east to the west and were formed over 2.5 million years ago. Makes for a pretty explosive holiday. It is considered as one of the best mountains in Europe.

Despite being the highest peak in Europe, Mount Elbrus makes for a comparatively easy climb especially in conjunction with the other mountains on this list. It only takes about 8 hours to ascend this mountain range via chairlift and is perfect for an amateur mountaineer who seeks a Eurasian adventure.

Dykh-Tau also called Dikh Tau or Dycktau is the second highest peak in the Caucasus region of Russia. Interestingly, its name is of Turkish roots and means ‘jagged mountain’ in Turkic. It truly does earn its name, rising up to 5,205 meters or 17,077 feet from sea level. The views from this range are stunning and unparalleled in their beauty.

Due to its steep slopes, it is difficult to scale this mountain and a journey here should be undertaken by only those who have a certain level of training. Bear in mind that while it is absolutely breathtaking, Dykh-Tau takes 13 days on an average to climb at a normal pace.

Shkhara is Georgia’s highest summit and lies in the Svaneti Caucasus region. As one of the most popular mountains in Europe continent, this Georgian summit is a snow-capped beauty was first scaled in 1888 and is a difficult climb. The Bezingi ridge is its highest point at 17,060 (5201 m) height.

For thrill seekers, Shkhara is a rewarding climb as it has a combination of snow covered, treacherously rocky, steep mountain terrain. Completing the Shkhara-Benzingi Wall is one of Europe’s most difficult challenges and is a popular choice among serious mountaineers.

The Koshtan-Tau is a massif with several peaks within its range. At a height of 5,144 meters, this range is present in the Russian section of the Caucasus.

Many of the peaks in this range go well above the 5,000 meters mark.

The Koshtan-Tau range has both easy and treacherous traverses and boasts of a vivid route of climbing. It proves to be an advantageous trek for interested adventurers venturing into uncharted territory.

The 3rd Georgian peak on the list, Tetnuldi is a dormant subclass of a volcano or a stratovolcano. It’s a part of the Caucasus Mountain range and has the 3rd highest peak in Georgia, Kazbek in its range. Kazbek is at a height of 5,047 meters.

Tetnuldi is the crowning jewel of the Kazbegi National Park and is home to a plethora of alpine meadows and beach tree forests. It is a destination for mountaineers and nature lovers alike. For mountaineers, it is a tricky climb and an adventure of a lifetime.

Snow-capped and pristine, this is a sight for sore eyes. Adishi, or Hadishi, is another mountain of the Greater Caucasus mountain range with its highest peak, Adishi over 15,000 meters above sea level. It is a neighbor to several mountains in Europe such as Mount Elbrus and the charming little town of Mestia.

This is the ultimate place for skiing with new ski resorts popping up all around this range. It is easy to access and is a popular choice among tourists and ski enthusiasts.

Mont Blanc or Monte Bianco is nestled between France and Italy and is among the top picks of tourists for the most beautiful mountain sights. It rises to a stunning 4,807 meters and offers a breathtaking view of the surrounding sites, above as well as below.

The ‘white-mountain’ is a one-stop destination for those of us who are crazy about snow sports. It has the widest variety of snow sports and is perfect for skiing, snowboarding, and other winter sports adventuring. For adventure seekers and ice-climbers, Mont Blanc also features the Mer de Glace glacier, the second longest in the Alps.

Ushba mountain is the Matterhorn of the Caucasus Mountains. However, this distinction is not only for its height (which is impressive at 4,690 m) of 15,387 ft but for its stunning double summit. The Ushba range is magnificent but is amongst the most difficult mountain climbs in the Caucasus mountain range. It may take up to 12 days to climb this range.

There is no truer adrenaline rush than the climb of the Ushba. It also involves cross-country climbing as it crosses into Russia. It is a spectacular vacation choice for true thrill seekers and adventurers.

Mount Rosa is the highest peak in Switzerland and is the second highest peak of the Alps range. If you are having a difficult time to choose which of the mountains in Europe to climb. Dufourspitze is its main peak at 4,634 m (15,203 ft) and is subject of many touristic adventures.

Monte Rosa is characteristically Swiss in its nature and remains snow-covered throughout the year. Travelers enjoy hiking, skiing, snowboarding, mountaineering, and trekking. A complete trek in this mountain will take around 10 days. However, temperatures can drop well below 20 degrees and conditions may be overwhelming to some. Well-rounded research is crucial before venturing to these mountains. It is amongst the most beautiful yet dangerous mountains in Europe.

The Alps are the signature mountain range in Europe and are among the most common choices of any adventure traveler planning to head towards the continent. Clocking in at an impressive 4,545 m (or 14,911 ft), Dom is the third highest peak in the range. Along with its twin, Taschhorn, Dom has secured its place as the absolute mountain majesty.

Although Dom is amongst the highest mountains, it is a relatively easy climb. The Dom is also famous for the intersection where the main Alps chain and an auxiliary chain running from Schwarzberg Horn in the South to Distelhorn meet.

Scuba Diving In Pondicherry: A Handy Guide To Experience This Adventurous Activity In 2020!

12 Enthralling Adventure Sports In Kerala To Challenge Your Adventurous Souls!

Go Karting In Bangalore: 13 Spots To Visit And Play An Ultimate Challenge In The City In 2020!

Trekking In Manali: A Tryst With The Best Of Himalayan Trails In 2020!

10 Trails For Trekking In Shillong That’ll Allow You To Experience Pure Bliss In 2020!

6 Adventure Sports In Ooty Which Will Definitely Give You An Adrenaline Rush In 2020!