Munich In January: Guide To The City Fondly Called Florence On The Isar 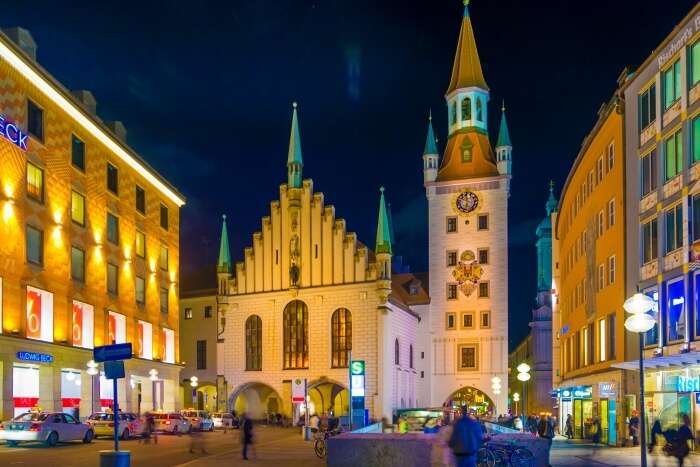 There is a magnetic charm about Munich that lures in travel enthusiasts from around the world to grace this Bavarian gem. Today, it is known for Oktoberfest and the widest range of beers that are served in one place . One of the most exciting aspects of this city is its effortless amalgamation of the traditional and the modern. This is evident from their obsession with the rustic beer halls and Leather pants at the same time. While many think Munich should be avoided during the winter months because of the extreme temperature, we feel that it makes for an absolutely wonderful destination. Read on to know about Munich in January.

Is It A Good Idea To Visit Munich In January?

Munich is frequented by many during the spring season because the weather is pleasant during these months. However, there is something different in the air in Munich in the winter seasons, especially during the months of December and January. Moreover, January is the low season which translates to smaller crowds and cheaper prices. If your style of vacationing involves an overcoat and a pair of woolen gloves, you should definitely consider visiting Munich in January when the temperature goes lower than 20 degrees. The weather in Munich in January 2019 is forecasted to be between 10 and 20 degrees and hence, would make for a perfect winter vacay!

Places To Visit In Munich In January

There are many experiences that one can enjoy here only in the festive months of December and January adding to the list of reasons that make visiting Munich in January a delightful experience.

If one place in Munich could capture the spirit of the city, it would be Marienplatz. It is located right in the heart of the city and had been around since the 12th century when it was used to organize many markets and tournaments. After all these years of change and celebration, Marienplatz is today known for hosting some of the most spectacular Christmas markets in the city. Marienplatz is best known for housing the Neues Rathaus which covers approximately 3.5 square miles and has 400 stunning rooms. There was a competition about designing the city’s town hall and Georg Hauberrisser won it. One of the most beautiful features is the grand Glockenspiel cuckoo clock which has a carousel of figures that break into a dance at 11 am, noon, and 5 pm.

Must Read: 10 Day Trips From Munich That Are Worth Taking Once In 2018!

This is one of the most visited museums in Munich and for good reason. Although it is a museum of science and technology, the collection here is not limited to a particular discipline and transcends different time eras. You could find on a display, the cave of Altamira and a magnified human cell. The museum has 8 floors and one is designated especially for children, ‘Kinderreich’. There are many interesting things on these floors ranging from aircraft and vehicles to machinery and even mine. It is located on an island that stands on river Israr. The museum also houses a planetarium (can’t keep calm!) and it is in fact, ahead of the race in technology from many others in Europe.

Suggested Read: Munich In Summer: Your Personal Guide For A Soothing Germany Vacay In 2019

If you’re at Marienplatz, this park will only take you 10 minutes on the U-bahn from there. We feel like this is a massively ignored tourist attraction, but it has all the elements needed to make an unforgettable touristy day for many. There is a barbeque area by the lake, a Japanese garden, a Thai temple, and even an outdoor cinema in summer and we don’t know what more do you need in a garden! Families love to have a picnic and BBQ’s here but if you are looking for something edgier, there is also a beer garden inside.

For a look into Munich’s royalty, visit the Munich Residenz which is the erstwhile residence of the kings and dukes of Bavaria. The residence has been demarcated into three different sections which are laid out around seven large courts. While the interiors will definitely pull you inside with the intricacy of the decor, make sure you also spend time in the wonderfully manicured Court Garden which houses many fountains, ponds, and gardens.

Suggested Read: Munich Travel Guide: A Curated Collection Of All That The City Has To Offer

Frauenkirche is the Cathedral Church of Our Lady that was constructed in the year 1488. This Late Gothic church played a significant role in the past which can be depicted from its enormous size. It has huge twin 100-meter-tall towers, with Renaissance domes, tower over a high building 109 meters long by 40 meters wide.

Things To Do In Munich In January

While the rest of Europe travel goes to slumber, Munich lightens up in January. There is an array of things you can do when on a trip to this beautiful city. Take a look at the best things to do in Munich in January 2020:

As the cold weather hits Munich, of the many things that change for the better is the Nymphenburg Palace canal which turns into the longest curling track of the city. Owing to the shallowness of the water, there is an icy cover formed 500 meters between Gerner Bridge and Hubertusstraße. Whether you are a beginner at curling or advanced, you can come here to curl and then head to the park cafe’s beer garden to chill and enjoy a good meal with some beer. This is one of the best things to do in Munich in January 2019.

One of the best things about the festive season is the overdose of Christmas markets (not that we’re complaining). The city’s favorite is the Christmas Market organized in Marienplatz owing to its central location and cheerful vibes. For a quintessentially Munich experience, purchase mulled wine, Feuerzangenbowle or red wine punch and other things to munch. The weather in Munich in January 2019 is perfect for going around in the Christmas markets in town.

3. Calm your senses in an indoor sauna

There are 10 indoor pools operated in Munich and hence, leave no chance for you to feel disheartened with the city’s indoor pool and sauna scene. Most of these pools have saunas and they are incredibly helpful in transporting you to another world, one where it is not as cold outside. In fact, many sauna events are organized here rendering it completely futile to make an expensive trip to a spa resort.

Winter dreams are made of snow sports and nothing spells fun as much as ice-skating at Munich. There are many places to go ice skating here and one of our top favorites is the ‘Münchner Eiszauber’ open-air rink which is open during the evenings as well. If you are visiting Munich in January 2019, simply hire a pair of snow boots and get ready for an action-packed day! Ask somebody to click a picture of you on the snow for those winter postcards.

5. Explore The City Through Tram

Still looking for the best things to do in Munich in January 2020? When the temperature dips down and cold breeze thrills the city, its best to explore it via Christmas Trams, runs exclusively during winter months in Munich. This tram will make you catch the best glimpse of the city and you can also enjoy the delicacies served and the festive music.

Places To Stay In Munich In January

We have listed three of the most highly recommended and rated properties to help you narrow down your choices if you are visiting Munich in January:

While there are hundreds of excellent accommodation options to choose from in Munich depending on location and budget. This hotel is one of the famous ones. This is located near Marienplatz making it an excellent location and this historic 4-star property has rooms that are adorned with a classic taste and warm tones for an overall luxurious and elegant ambiance.

Days and nights spent here translate to time spent sipping home-brewed beers and relishing traditional Bavarian dishes in the onsite pub and beer garden. The room has wooden everything: floors, furniture, and windows making it a classy stay! It might be a tad bit expensive than other hotels, but the luxury you can enjoy here is unparalleled.

The interiors are unparalleled inside this hotel and it also houses a highly rated restaurant known for whipping up delicious Bavarian meals along with a cocktail bar known for its whiskey sours and cosmopolitans. To kick things up a notch, head to the spa or a rooftop pool which lets you enjoy picturesque views of the entire city as you calm your senses.

Further Read: Your One Stop All Inclusive Guide To Lake Bohinj In Slovenia

If your style of vacationing involves an overcoat and a pair of woolen gloves, you should definitely consider visiting Munich in winters. Munich in January is a paradisaical experience that you must definitely get a taste of on your next vacation. Book your packages for Munich in January 2019 from TravelTriangle for an unforgettable holiday experience in Germany.

Q. What is there to do in Munich in winter?

A. The following are the best experiences of Munich in winter:
1. Check out the snow view
2. Go for sledding in Spitzingsee
3. Enjoy ice skating
4. Visit Christmas Markets
5. Board a Christmas Tram
6. Watch a movie
7. Visit a museum

Q. Is there snow in Munich in December?

A. Yes, there are 3% chances of snow in Munich in the month of December.

Q. When should I visit Munich?

A. The best time to enjoy the exquisite beauty of Munich is during springtime between last week of March to May end. Planning an excursion during September and October will also make you have an awesome experience.

Q. How many days should I spend in Munich?

A. A minimum 3-4 days stay is required to explore the entire city.

Q. How cold does it get in Munich?

A. Winters are quite cold here in Munich and the temperature also drops to zero degrees during winter days.

Q. What Munich is famous for?

A. Munich is famous for numerous things such as its impeccable beauty, magnificent architecture, fine culture, and enthralling festivals especially Oktoberfest.

A. Yes, it is a safe city both for visitors as well as travellers.

9 Wonderful Places To Visit In Frankfurt: See The Best Of Germany In 2020