Museums Near Cenotaph: Witness The Glorious Past Of Singapore 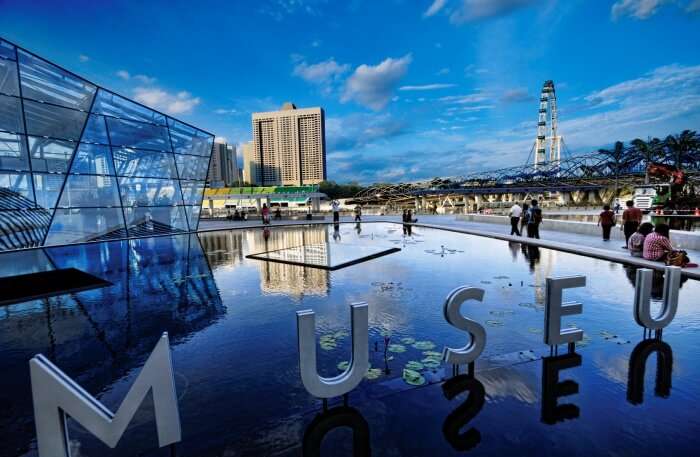 The Cenotaph is a memorial to the brave men who died in the First and Second World War. Surrounded by the lush Esplanade Park on Connaught Drive, the granite monument stands at 18 feet high in a quiet area of ​​a central business district in Singapore. It stands on amidst the bustle of the surrounding streets. There are a number of museums near Cenotaph as well. The bronze plaques on the cenotaph have the names of the men who sacrificed their lives in honor of their duties. The cenotaph’s construction began in 1924 in memory of Singaporean men who were killed during World War I. It was designed by architect Denis Santry of Swan & Maclaren and inspired by the cenotaph in Whitehall in London, England.
Other than the bronze plates with the name of the soldiers written in the four main languages of Singapore: English, Malay, Mandarin, and Tamil.
The cenotaph is made of granite produced locally and is quite high at 18 meters high. The bronze plates in the memorial in the name of the men who died during World War I. Each of the Five First Steps to the Monument mentions the war years 1914, 1915 1916, 1917, and 1918. Over them is a bronze medallion composed of a victorian laurel wreath containing a crown that these men and unions are a symbol of bravery. Under the inscription “The Glorious Dead” are the words “They died that we might live”, commemorating the soldiers. All in all, the cenotaph is a majestic memorial made of simple granite made with a hammer and chisel. Singapore has countless tourist attractions and is considered one of the best tourist destinations in the world.

This island city admired by everyone is historically, culturally and economically rich. The country has seen many developments in the year following the independence of the rules of the British and Japanese empires. All industries have developed in this country and most of them make a significant contribution to the country’s economy, including the tourism industry.

One of the many intriguing things to do in Geylang, Singapore is to plan a visit to the Peranakan museum called The Intan. The most interesting aspect of this place is that this place is a home-cum-museum started by its owner Alvin Yapp. The amazing place will give you a complete insight about the life and times of the Peranakans, scions of immigrants from China who married the Malay women. It’s a treat to spend some time learning about the rich heritage, tradition, culture and lifestyle of the community and that too straight from a fellow Peranakan. A 90 minute tour is concluded by a tea and snacks session which is a complete traditional affair and the culinary delights are prepared by the owner’s mother herself.

Image Source
This is the place to visit to learn all about the country be it wars, architecture, fashion, designs or culture. Best among the historical museums in Singapore, it takes you through an intriguing journey of fun and information. And its not just a depository of artifacts. There are video montages, interactive exhibits, guided tours, art performances, live galleries and movie screenings.

Singapore is an island and a country, but its best size is that of the city. As the cities of the past, it offers our civilization a new face. The combination of Western-style development and Oriental-style tranquility seems to be better when together in Singapore. It is a modern city to stroll around and an Asian business center that is a model of efficiency. Singapore is also a multicultural city and a quarter of its population consists of expatriates or foreign workers from around the world. Singapore is the most modern country in the region, making it a must for travelers to check out these museums near cenotaph on their visit to Singapore.