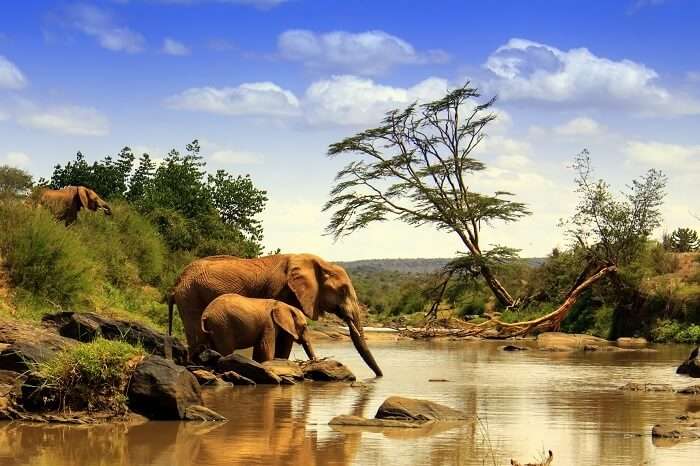 The beauty of Kenya is hidden in its raw and rustic national parks which is a home to many endangered species. This east-African country is named the wildlife capital for having numerous national parks and reserves in its boundaries.

10 Best National Parks In Kenya That Are A Must Visit

For all the wildlife lovers, here are 10 best national parks in Kenya which will leave you spell bounded as you explore the wildlife of Africa with your naked eyes and feel the thrill of staying close to these wild beasts.

Suggested Read: Best Safari In Kenya: The Ultimate Guide For A Vacation In The Wild

One of the greatest wildlife reserves in Africa, the Masai Mara reserve is situated at the south-west of Kenya. Merged with the Serengeti National Park, this place is a home to around 95 species of mammals and 570 bird species, this place gives an incredible view of the wildlife which one cannot miss.

Resting at the foot of mount Kilimanjaro, the Amboseli is one of the best national parks in Kenya. The signature sight of this park is sighting hundreds of gigantic elephants with big tusks. Along with this the reserve is blessed with mesmerizing views which can be witnessed in the dusk and dawn.

Best Time To Visit: July-September (January and February)
Major Attractions: Elephant Research Camp, Lake Amboseli, Sinet Delta
Must Experiences: hiking at Mt. Kilimanjaro, visit to the Observation Hill, meet the Masai Tribe
Where To Stay & Eat: Ol Tukai Lodge, Amboseli Serena Lodge, Kimana Lodge, Tortilis Camp
How To Reach: The national park is easily accessible from road. The route from Nairobi to Namanga is quite rough whereas from Namanga to Meshanani gate leads to experience potholes in the journey. And the flight also connects from Nairobi to Amboseli.

Suggested Read: 10 Surreal Beaches In Kenya That Portray The Soothing Side Of Africa!

Best Time To Visit: June-October and January and February
Major Attractions: Tsavo East, Epiya Chapeyu Tented Safari Camp, Agenzia Safari Vera Africa
Must Experiences: Ngulia Rhino Sanctuary, Mzima springs, Ngulia Hills, Lake Jipe
Where To Stay & Eat: Kilaguni Serena Safari Lodge, Voi Wildlife Lodge, Voyager Ziwani Camp
How To Reach: One can take a personal transport or bus from Nairobi, Mombasa and Malindi. Chartered flights can also be used which will land at one of the six airstrips in the south or 13 airstrips in the north.

Resting at the cliff of the Aberdare mountain range, this national park was created to protect the slopes and moorland of the mountain. The high altitude makes this area misty and prone to frequent rain. Despite being at a height, this park shelters the second largest herds of the endangered species of Black Rhinos. Apart from this many Kenyan animals can be spotted here like the African elephants, black leopard and bongo antelope.

Best Time To Visit: June-September and also January and February
Major Attractions: Thompson Falls, Kereita Cave and Waterfall, Soysambu Conservancy
Must Experiences: Bird watching, trout fishing, visit to the Lesatima and Kinangop peaks, hiking to the elephant hills and twin hills
Where To Stay & Eat: The Ark Lodge, Outspan Golf and Country Club
How To Reach: The Aberdare national park is at a distance of 160 kms from the Nairobi city. Whereas the easy to access routes to reach the park is from the town of Nyahururu and Naivasha.

Giving a break from the constant view of the wild beasts, this park will take you on a ride to witness different species of birds from a close distance. One of the top places to visit for a bird safari, Lake Nakuru is crowded with flamingos and endemic wildlife breeds during the peak season.

Best Time To Visit : June-March
Major Attractions: Lake Nakuru, Hyrax hill prehistoric site, Makalia waterfall
Must Experiences: Watching flamingos on lake Nakuru, wildlife safari
Where To Stay & Eat: Lake Nakuru lodge, Sarova Lion Hill Lodge
​How To Reach: The park is located at a distance of 156 kms from the north west of Nairobi. The easiest access to the park is via the main gate which is 4 kms away from the Nakuru Town Centre.

Tucked in the wilderness of the Mt. Kenya, Mount Kenya National Park Nairobi is the second tallest mountain in Africa with a height of 5,199 meters. Surrounded with pristine view of the lakes, tarns, glaciers, mineral springs and sightings of various endangered species animals and unique montane plantation.

Best Time To Visit: December-March
Major Attractions: Mount Kenya, David Sheldrick Wildlife Trust
Must Experiences: Mountain climbing, camping and caving
Where To Stay & Eat: Kinondoni campsite, Austrian head campsite, Like North Hut
How To Reach: The park is located at a distance of 175 Kms from Nairobi, the park can be reached on Nanyuki-Isiolo road via Sirimon Track or Nyeri-Nanyuki road near Naro Moru.

This unusual name of the park derived from the geothermal activities which happens in the area. A spectacular and remarkable area settled amidst the Great Rift Valley, this place boasts high towered cliffs, water-gouged gorges, an explored volcano and geothermal steams which makes this park one of the most atmospheric region among all the national parks in Kenya.

Suggested Read: 20 Hotels In Kenya That Will Transport You To The Surreal Side Of Nature & Wildlife!

Named as the “world’s wildlife capital” , this park is just a few minutes drive from the Nairobi’s central business district. A fascinating blend of the rustic wildlife and the city scrapers standing at the backdrop of the park. This park has diverse range of endangered species of animals like the black rhinos, hyenas, lions along with this it also shelter for variety of birds.

Resting amidst the Rift Valley Province of Kenya, this name of this national reserve is derived from the Samburu tribe of Kenya who were settled in this area for a long time. With no fences around, this park is almost an open savannah which shelters rare species of animals and birds like the long necked gerenuk, grevy’s zebra and Beisa oryx.

Best Time To Visit: December-March and July-October
Major Attractions: Samburu National Reserve, Shaba National Reserve, Buffalo Springs National Reserve
Must Experiences: Wildlife safari, Bird watching and Samburu cultural tours
Where To Stay & Eat: Samburu Sopa Lodge, Samburu Serena Lodge, Sarova Shaba
How To Reach: The national park is located at a distance of 345 kms from Nairobi whereas the reserve is also accessible by road via Isiolo and Archer’s Post. There are also chartered flights connecting from Nairobi to the Samburu national park.

Just in the vicinity of the Mombasa or Diani Beach rests this national reserve rich in green vegetation and forested landscapes.Apart from being enriched with nature’s blessing, the reserve also hosts the African elephant in Kenya.

Best Time To Visit: June to August
Major Attractions: Sheldrick Falls, Mwalugunje Forest
Must Experiences: Guided night tours, Souvenir shopping, Spotting cheetahs and African elephants
Where To Stay & Eat: Shimba Hills Lodge
How To Reach: The national reserve is located 56 kms away from Mombasa which can be accessed by road from Diani

Now after knowing about these incredible national parks in Kenya, plan a holiday amidst these wild savannah’s by booking an Africa Tour Package and spend the best times of your life staying close to the wildlife.

An Ultimate Guide To Explore The Best Sights From Mombasa To Nairobi, The Melting Pots Of Africa!

13 Bahamas National Parks You Must Witness The Beauty Of