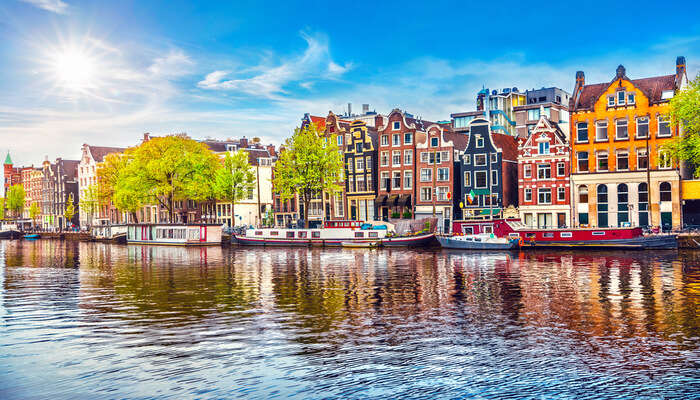 Imagine an open road, the end of which seems like a place beyond the horizons, and whereupon standing, you can look around to see alluring landscapes and windmills and feel the light gently touch your face. This is what the Netherlands in October looks like. The Netherlands is a beautiful country in Europe famous for many historical destinations and loads of captivating spots. While the country maintains pleasant weather throughout the year, it is ideal to visit it during October for many reasons that you will find out as you scroll down!

Weather In The Netherlands In October

The weather in the Netherlands is quite chilly and freezing as the average temperature recorded fluctuates between a minimum of 7.5 degrees Celsius and a maximum of 14 degrees Celsius. Nonetheless, the sky is pretty much always clear and the days bless you with ample sunlight to warm up your bodies and soul!

3 Things To Do In The Netherlands In October

 ​_The Netherlands has a lot to offer when it comes to interesting things that one can do. So, here are the three best things to do in Netherlands in October.

Nestled amidst dense forests, Soestdijk Palace was built in 1650 and till-date maintains regality and luxurious infrastructure. The Palace is decked up with beautiful nurseries and will give you a chance to have a sneak-peak into the royal living! The Palace is open for tours so you can go without any worries!

Must Read: Netherlands In March 2021: A Detailed Guide For Exploring The Country

If you are someone who loves enriching themselves with the history and cultural heritage of a place then exploring Kroller Museum will be one of the best things you can do in the Netherlands. There are many ancient paintings and sculptures at the museum that will give you an insight into the leverage that is left behind in the Netherlands.

Suggested Read: 10 Best National Parks In Netherlands For Your Next Wild Adventure

The Netherlands is famous for the sport of ziplining and if you are visiting, then you mustn’t miss out on this adventurous activity. Swing across the beautiful surroundings of the Netherlands and over beautiful buildings as you indulge yourself in this fun sport.

Suggested Read: The Netherlands In Winter 2020-21: A Country Tour Guide For This Exciting Season

3 Places To Visit In The Netherlands In October

There are a lot of places to visit in Netherlands in October that add to the cultural richness of the place. These places are worth a visit not once but a thousand times and here are the three best of these places.

One of Europe’s most well-known places, Amsterdam is an alluring city known for its rich cultural and historical heritage. The Anne Frank House and the Rijksmuseum Museum are the most well-known stops for history and craftsmanship searchers, while the Prinsengracht zone is perhaps the best spot for shopping, exhibition seeing, bar slithering, and looking at the special coffeehouses in Amsterdam.

Suggested Read: Honeymoon In Netherlands: Take A Romantic Vacay To The Land Of Tulips

The beautiful city of Leiden is an extraordinary spot to visit for its grand, tree-fixed channels that are set apart with old windmills, wooden scaffolds, and rich parks. A pontoon ride down one of these exquisite waterways makes for an extraordinary encounter. Attractions in Leiden incorporate the various exhibition halls that run from science and common history to galleries devoted to windmills and Egyptian ancient pieces. You can visit the beautiful architecture of the sixteenth century Church of St. Dwindle and much more!

Suggested Read: 15 Famous Festivals In Netherlands That Speak Volumes About Its Amazing Culture In 2021!

Most popular for the contemporary workmanship displays at the GemeenteMuseum Den Haag and the Royal Picture Gallery Mauritshuis, The Hague is seemingly one of the most phenomenal spots to visit in the Netherlands. Known as the Royal City because of its Dutch Royalty residents, it is always a good time to visit the Hague!

3 Places To Stay In The Netherlands

Waldorf Astoria Amsterdam is a 5-star lavish inn that combines comfort with world-class luxuries. It is situated in the core of the city, near every significant exhibition hall, theaters and shops, and just a little way from Amsterdam Airport Schiphol. The rooms of this stay are spacious, tidy and luxurious and you must not miss out on living here!

Amsterdam’s most established and most commended inn, the NH Collection Amsterdam Doelen Inn lies on the banks of the Amstel River in the core of the city’s notable community. Going back to the seventeenth century this social milestone has played host to everybody from Queen Victoria and Empress Sissi to The Beatles and Rembrandt! Experience luxury and regality at this dwelling!

Suggested Read: 10 Castles In Netherlands One Must Visit To Witness The Royal Side Of The Country!

This luxurious hotel is situated minutes away from Royal Carré Theater, Van Gogh Museum, Rijksmuseum and the Spiegelkwartier. The rooms at this hotel are spacious and tidy and the service is well-known.

Furrther Read: 10 Mosques In Netherlands That Give A Glimpse Of The Country’s Cultural Side!

Tips For Visiting The Netherlands In October

Netherlands in October is like poetry come alive; it is alluring and looks surreal on most days. The weather during this time is absolutely blissful and will make you feel comfortable and relaxed. You can tour around the place discovering new places and indulge in activities that will make your heart race fast. Explore culture and traditions as you plan your next trip to Europe soon!

Frequently Asked Questions About The Netherlands In October

Q. Is October a good time to visit the Netherlands?

A. Yes, October is a good time to visit the Netherlands provided that the weather is great and there are fewer people so it is not very crowded.

Q. Are any festivals celebrated in October in the Netherlands?

A. Yes, one of the festivals in Netherlands is the Amsterdam dance event which is celebrated in the last week of October.

Q. How is the weather in the Netherlands in October?

Q. What should one pack for an October trip to the Netherlands?

A. One should pack light winter clothes such as a light coat, scarves, thin cardigans, etc.

Q. Are there any beaches in the Netherlands?

A. Yes, some of the beaches in the Netherlands are:
Scheveningen Beach
Zandvoort Beach
Ameland Beach
Texel Beach
Hoek Van Holland Beach

A budding entrepreneur, Raminder has completed his studies from Delhi and gradually developed interest in writing. His zeal and experience is what has made him a successful writer today.

7 Exciting Festivals Of Edinburgh Every Foodie, Artist, & Thinker Should Attend In 2021

Food In Munich: 15 Mouth-Watering Dishes To Experience The Real Taste Of The City In 2021