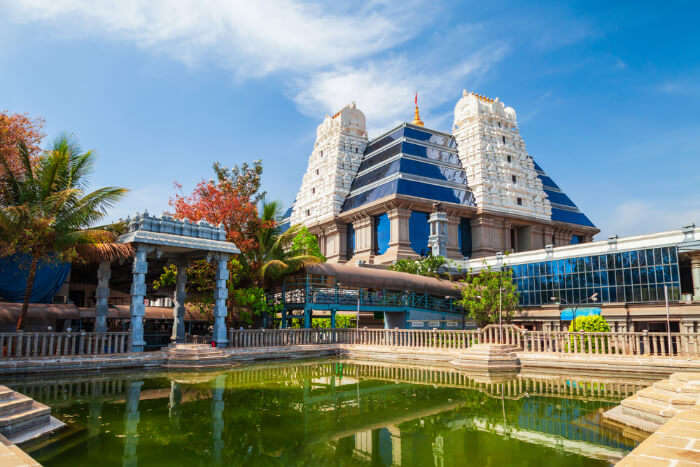 Bangalore, officially known as Bengaluru is the capital of the Indian state of Karnataka. This place is the third most populous city and fifth most populous urban agglomeration in India. The diversity of religions is reflective of the rich cultural heritage of this place. Although it is known to be a commercial hub, one can find various temples, Mosques, Churches, Jain derasars, Sikh gurudwaras, Buddhist viharas and the list goes further on. The ancient temples in Bangalore are built in the traditional Dravidian architectural style whereas few exhibits a modern facade. Must visit Bangalore if you visit Karnataka. It will provide to you the best religious trip you might have ever planned.

15 Most Popular Temples In Bangalore You Must Visit

Here is a list of the most popular and incredibly beautiful temples in Bangalore that will give you an overwhelming and insightful experience of diverse religions and cultures of India. Take a look!

Located at Domlur in the Indian city of Bangalore is one of the oldest religious structures built. It is dedicated to the Hindu god, Vishnu known as Chokkanathaswamy or Chokka Perumal. The temple is famous for its large pillars and the beautifully sculpted statues. This temple is one of the ancient temples in Bangalore which attracts tourists with its magnificent architecture and intricate designs.

Must Read: 20 Monsoon Getaways Near Bangalore One Must Visit For A Scenic Escape In 2019!

Located in the Bull Temple Road, Basavanagudi, area of South Bengaluru, part of the largest city of the Indian state of Karnataka. It is also known as ‘Dodda Basavana Gudi’ or ‘The Bull Temple’. This temple is dedicated for worship of the sacred bull in Hinduism known as Nandi, Lord Shiva’s vahana. The temple boasts a Dravidian architecture which was built by the Kempe Gowda. Apart from the magnificent statue of the bull at the entrance there is a beautiful statue of Ganesh placed inside the premises of the temple.

Location: Bull Temple Rd, Basavanagudi, Bengaluru, Karnataka 560004
Timings: 6:00 AM – 8:00 PM
Famous For: The bull statue in the entrance is built of a single granite stone

Suggested Read: The 10 Best Illuminating Museums To Visit In Bangalore

Also known to travellers as Shree Radha Krishna Temple, ISKCON Temple is located at Rajajinagar, in the area of North Bangalore, the capital of the Indian state of Karnataka. It is considered to be one of the largest ISKCON temples in the world and apart it is also the famous Krishna temple in Bangalore. Prosperous festivals related to avatars of Lord Vishnu or Vedic culture celebrated with great joy have made it a prime religious attraction of the city.

Location: Hare Krishna Hill, Chord Rd, Rajajinagar, Bengaluru, Karnataka 560010
Timings: 7:15am–1pm, 4pm–8:20pm
Famous For: This is one of the largest Iskcon temples in the world

It is a famous Shiv Temple dedicated to the Hindu deity, Lord Shiva and a popular spiritual destination located on Old Airport Road in Bengaluru, the capital of the Indian state of Karnataka. The temple complex contains a marvellously constructed statue of Lord Shiva, with the Holy Ganga flowing out of his matted locks.

Suggested Read: 12 Amusement And Water Parks In Bangalore That Are Ideal For 2019 Summer Vacay

Built in the 7th century, the temple is popularly known as Banashankari or Vanashankari since it is located in the holy region of Tilakaaranya forest. The temple is devoted to the Shakambhari, an incarnation of goddess Parvati. It is a major attraction of devotees from Karnataka as well as the neighbouring state of Maharashtra.

Another mesmerizing temple of Bangalore happens to be located in Hulimavu, Bannerghatta road, Bangalore,the capital of the Indian state of Karnataka. The temple complex contains three main deities consecrated inside. A Shiva Lingam occupies the center, a Devi idol and an idol of Ganesha on each of the sides has been consecrated.

Located in Krishnarajendra road in Bangalore is dedicated to the Hindu god Venkateshwara. The temple was formed in the late 17th century in Dravadian and Vijayanagar style by the ruler of mysore.The main festival celebrated here is Vaikuntha Ekadashi when thousands of devotees throng the temple.

Suggested Read: 26 Road Trips From Bangalore You Must Plan With Your Friends In 2019

Shri Dharmaraya Swamy Temple Is considered to be one of the oldest and famous temples situated in megacity, Bangalore. The temple is especially dedicated to the Karaga festival. Gowdas, Ganacharyas, Chakridaararu are the devotees who carry the tradition of conducting the Karaga every year.

Another entry in the list of incredible temples in Bangalore is The Jagannath Temple located in on Sarjapur Road in Agara, Bangalore. It is dedicated to the Hindu god Jagannath, his brother Balabhadra and his sister Subhadra. The beauty of this temple is experienced by more than fifteen thousand worshippers every year.

Suggested Read: 10 Off-The-Wall Weekend Destinations Which Every Bangalorean Must Try

Located in Rajarajeshwari Nagar, Bangalore, the capital of the Indian state of Karnataka. The temple is dedicated to the main deity, Lord Shanmukha. It is one of the important tourist destinations and religious places in Bangalore City.

The literal meaning of the Gavi Gangadhareshwara temple is “cave of the lord who adorns the Ganga”, which has been restored by Kempe Gowda in Gavipuram. Located close to the Basavanagudi, this shiva temple holds quite an importance in the city. One of the oldest temples in Bangalore, this place looks magnificent as it is cut out of a rock and still retains its special astronomical significance.

Another in the list of the best temples in Bangalore is the Someshwara temple which is located at the banks of the Ulsoor Lake. This temple was built during the reign of Chola empire and its historic architecture still speaks the story. In the 16th century, the Kempe Gowda renovated the temple and during that the gopurams (towers) were also added. There are carvings in the wall which reflects the story of Shiva’s marriage to Parvati. The beautiful architecture of the temple is surely going to mesmerize you.

Nageshwara temple is one of the hidden gems of Bangalore which is located close to the Hosur Road on the outskirts. Built during the Ganga and Chola era, the architecture of this temple is just incredible. The main deity in the temple is of Lord Shiva. The temple is also called the Panchalingeshwara temple as there are panch-lingas in the shrine. In the present the temple attracts people who are fond of the elegant structure.

Built in the 17th century by the younger brother of Chhatrapati Shivaji who once ruled Thanjavur in Tamil Nadu. In the earlier times, this temple was enclosed by a lush green thick jungle which now has become the old neighbourhood named Malleshwara. This place brightens up during the Maha Shivratri when a week-long celebration happens in the region. Apart from its magnificent architecture of the temple, there is a steady waterfall which is quite a mystery till date.

Resting at the hilltop of Jayanagar, the Ragigudda temple is one of the peaceful temples in Bangalore. This is one of the landmark places which add a beauty to the panoramic views of the city. Built in the year of 1969, this temple worships Lord Hanuman and devotees come in huge numbers to seek help. There are shrines of Lord Rama, Sita and Lakshman within the temple premises. The main highlight of this temple is during Hanuman Jayanti when the festival is celebrated for 12 days with great enthusiasm in the month of April.

Location: KSRTC Layout, 9th Block, Jayanagar, Bengaluru, Karnataka 560069, India
Timings: 8AM-11:30AM, 5PM-8PM (Weekdays), 8AM-12:30PM, 5PM-9PM (Weekends)
Famous For: It is believed that Lord Brahma, Vishnu and Shiva have visited this spot. This is depicted in a carving on a 32 foot tall monolithic blocks.

Temples reflect a synthesis of art, the ideals of dharma, beliefs, values and the way of cherishing life. It happens to create a spiritual link between man, deities and the Universal Purusha in a sacred place. Being the third largest and one of the most livable cities, Bangalore have gradually evolved from being Garden City to the Silicon Valley of India. Temples in Bangalore will provide to you with rich information on the heritage and culture of the city, and by extension, India. Planning a religious trip to India? Why not book a ticket to explore the marvelous city, Bangalore for a pretty perfect getaway.

Q. Which is the oldest temple in Bangalore?

A. The Someshwara Temple located in Halasuru is believed to be the oldest temple in Bangalore.

Q. How many temples are there in Karnataka?

A. There are well over 34,000 holy shrines and temples in Karnataka. Bangalore alone is home to more than 1,000 temples out of these.

Q. Is the ISKCON Temple in Bangalore made of gold?

A. The ISKCON Temple in Bangalore is amongst the most beautiful ISKCON temples in the world. Though it is not entirely made of gold, many of its prominent features are. You will find that the There Dhwaja Stambha (flag post) of this temple is gold-plated and is over 17 meters high (around 56 ft). The temple’s 28-feet high Kalash Shikara is also gold plated and puts people in a trance with one glance!

Q. Which is the oldest Hindu temple in the world?

A. The Mundeshwari Devi Temple (or Mundesvari Temple) situated in Kaura in the Kaimur district of Bihar is believed to be the oldest Hindu temple in the world. The temple is tucked away in the Mundeshwari Hills and is dedicated to Lord Shiva.

Q. Who built the ISKCON Temple in Bangalore?

A. The massive shrine of ISKCON in Bangalore was a part of the global project of ISKCON which was started to memorialize the birthday of its founder, Sri Prabhupada. The famed ISKCON Temple of Bangalore had opened its doors to the public in May 1997 after it was inaugurated by Mr. Shankar Dayal Sharma (the former President of India). The temple receives thousands of visitors every month!

A. The ISKCON Temple do have a set of restrictions regarding clothing for the people that enter the temple complex. One is advised to wear modest clothing that covers their shoulders and knees. One should refrain from wearing things like jeans, short tops, short skirts, and see-through garments.

Trekking In Uttarakhand: The 10 Greatest Treks That Will Leave You Mesmerized

21 Exciting Things To Do In Chikmagalur On Your Next Vacay In Karnataka!