Street Food In Bangalore: 15 Delicacies You Can’t Miss In 2020 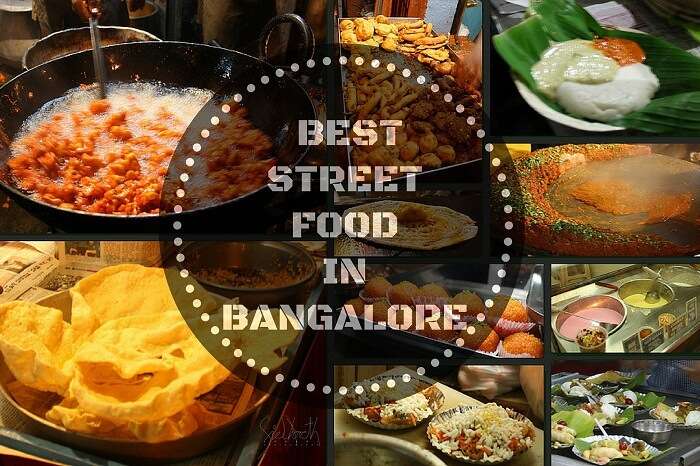 Silicon Valley and the hub of IT in India, Bangalore is a city of people, colors, and culture. It is also the city of sumptuous and mouth-watering delicacies that you just can’t say no to!From its dazzling plethora of splendid gastronomy, we bring you the best street food in Bangalore that you must not leave without trying. We put together everything you must know — popular eateries, as well as their must-try delights — before trying the famous street food in Bangalore that will blow your mind!

Most Popular Street Food In Bangalore: Cuisines From The Peninsula

Bangalore is known not only as the IT Sector, but also a foodie’s haven. The street food here is amazing, fulfilling, and available at budget friendly prices. Scroll down and check out the most tempting street food items to try here that will have you coming back for more!

A local delicacy of Udupi region, Mangalore Bun is sweet, tender and fluffy puri made of bananas. Easy to make, these Mangalore banana buns are generally relished with coconut chutney and sambhar. If you are looking for the yummiest street food in Bangalore, start with them.

Where to try: Chetty’s Corner in Serpentine Road and New Krishna Bhavan in Sirur Park

Relish with: Nothing tastes like a day-old buns eaten with potato bhaji or kurma. Mangalore Buns can be served hot or cold.

Must Read: 25 Best Restaurants In Bangalore For Every Occasion, Budget & Cuisine, Just For You!

Obbattu is a local dish of Mysore region and a popular street food in Bangalore. Locally called bobbatlu or puran poli, Dal Obbattu is made of toor dal, jaggery, cardamom powder, flour, and rava. It is one of the delicacies savored during festivals like Diwali and Ugadi. Obbattu is served piping hot with ghee sprinkled on it.

Where to try: Holige Mane in Malleshwaram

Shelf life: Dal Obbattu can be stored in room temperature for 2 days.

Suggested Read: 20 Offbeat Places Near Bangalore That Cherish Your Weekend Delights In 2020

The South Indian breakfast – piping hot idlis, soft vadas, and crispy dosas – is also the signature street food in Bangalore. These south Indian delights are easily available, affordable, and exceptionally tasty. They are best served with hot sambhar and coconut chutney. The neer dosa available at some outlets is an integral part of the Karnataka cuisine. It’s surely the best thing to try in the list of street food in Bangalore.

Suggested Read: 26 Road Trips From Bangalore You Must Plan With Your Friends In 2020

Eating the hot and crispy bhaji is one of the best ways to enjoy the typical Bangalore ‘mausam’. A number of roadside stalls sell these deep fried vegetable bhajis, winning the hearts of millions of foodies in Bangalore or maybe try them on your Weekend Getaway From Bangalore.

Where to try: Shivraj Bhaji Cart in Vijayanagar, Basavaraj’s Bhaji Bandi in JP Nagar, and Pramod’s Jalebi & Bhajji in Koramangala

Relish with: Sold with grated carrot and onion salad, and dhaniya-pudina chutney, they are the perfect rainy day snack, especially with a cup of refreshing filter coffee.

Suggested Read:51 Fabulous Places To See In A Day Around Bangalore In 2020!

Vada Pav, the popular street food of Mumbai, is quite loved in Bangalore too. Vada Pav is nothing but a sandwich made of bun-bread stuffed with vada. It is a spicy delicacy, served with gunpowder chutney and fried green chillies. In fact, there is a non-vegetarian version too. Replace the veg vada with stuffed minced meat and it becomes spicy and yummy keema pav. It surely is a great option if you are craving some midnight street food in Bangalore.

Where to try: Dadan Vada Pav in Indiranagar and Chatar Patar in Jayanagar

Image Source
Another one of the Bangalore special foods is Uttapam which is made with onions, rice flour and tomatoes. It is very much like dosa but just a lot more softer. The best way to relish Uttapam is with fresh Coconut chutney. Mouthwatering! From street side stalls to top notch restaurants in Bangalore, Uttapam is served almost everywhere.

Must try: Dosa and Idli

Suggested Read: Go Karting In Bangalore: 13 Spots To Visit And Play An Ultimate Challenge In The City In 2020!

Discover some of finger-licking North Indian food items that are served with some extra zest and flavors in the streets of Bangalore!

7. Sandwich And Parantha – For North Indians In Bangalore

The young population of Bangalore is always looking for a quick bite that is filling and yummy at the same time. Sandwiches and parathas are the best options for them. Bangalore has some awesome sandwich outlets that serve healthy and reasonably priced variants.

For those who don’t mind a little butter, there are parathas – choose from gobi, aloo, mooli, pyaaz, and more stuffings. This lip-smacking street delight tastes best when served with melting butter on top, a tangy pickle, and green chili. Midnight hunger pangs? Order away some sandwiches and paranthas that is, without a doubt, the best street food in Bangalore at night.

Suggested Read: 8 Best Amusement & Water Parks In Bangalore That Are Perfect For A Refreshing Day Out

Reasonably priced crunchy rolls and freshly grilled kebabs are also among the popular street food in Bangalore. These wraps, in the form of crispy parathas, have both vegetarian and non-vegetarian variants. Succulent and tender chicken rolls, mutton rolls, vegetable rolls, grilled tikkas, and juicy kebabs must not be missed.
For the health conscious people, there is an option to replace the paratha of the roll with roomali roti. However, taste-wise does not try to match with typical Calcutta Rolls as Bangalore has its own tasty version.

Where to try: Khan Saheb & Chakum Chukum Calcutta On A Roll in Indiranagar and Sha-E Darbar in Yeshwanthpur

The crispy, tangy, and spicy preparation of Gobi Manchurian is quite famous. Regarded as the best street food in Bangalore by the youth, it is a pocket-friendly delicacy made by deep-frying cauliflower balls and tossing them in dark soya sauce. Chopped spring-onion garnishing adds to the taste. Though the dry version is a popular snack, gravy variant is also available.

Where to try: Murli in Bellandur, Spicy Corner in Jeevanbheema Nagar, and Srinathji in Marathahalli

Though chaat and pani puri are not native dishes, Bangalore has adapted the chaat culture. You will find many roadside stalls and small restaurants selling mouth-watering varieties of khatti-meethi pani puri and chaat. The yummy filling of chhole and aloo in pani puri and the awesome combination of wafers, chips, bhujia, dahi, black salt, and imli chutney will be a treat for your taste buds. Looking for some good street food in Bangalore? Try chaat and pani puri!

Where to try: Puchka in Marathahalli and Sri Sairam Chaats and Juices in Malleshwaram. However the best Pani Puri is available at Rakesh Kumar Pani Puri stall in 3rd Block, Jayanagar.

Suggested Read: 17 Beaches Near Bangalore That You Have Got To Explore This Summer 2020!

11. Bhel – The Crunchy And Chatpata Plate

Bhel puri is a delicacy from the chaat genre, made of puffed rice, vegetables, tangy imli chutney, and bhujiya, seasoned with chaat masala. A close cousin of this pocket-friendly street food in Bangalore is sev puri, a famous food in Bangalore. It is a closer variation made of small pieces of potato, curd, garlic, and tamarind dip, garnished with small and crispy noodles or sev.

Where to try: Karnataka Bhel House in Basavanagudi, Tikki Tikki at Koramangala and Sri Sairam’s Chats and Juice in Malleshwaram

This one dish is evergreen and gets a new flavour everywhere. Try Pav Bhaji in Bangalore for the soul satisfying taste of it. One of the famous foods in Bangalore, Pav Bhaji is a delicacy made from soft bread and served with thick vegetable curry.  It is delicious aand you must not miss it out on your trip to Bangalore.

Where to try: Village- The Soul Of India, Sukh Sagar, Sikori and Chaat Street.

Suggested Read: Here’s The Perfect Guide To Reap The Best Nightlife In Bangalore In 2020

Does this even need an introduction? One of the most famous foods in Bangalore Shawarma is mostly served with chiclen as a filling. This Lebanese dish is actually very popular in the North Indian region so here it is. Shawarma is basically a Lebanese roll served with hummus and pickles.

Image Source
One of the most loved and Bangalore special foods, Samosa Chaat is something you should definitely try. Samosa is a very popular dish all around the country and we all know why!  A famous ‘chai – time’ snack, in Bangalore they do Samosa differently. There is an added flavour of chaat to it which makes it so much better.

Suggested Read: 12 Amusement And Water Parks In Bangalore That Are Ideal For 2020 Summer Vacay!

Can any list for street food be complete without mentioning Momos? One of the most popular street foods in Bangalore, Momos dominate Bangalore’s food scene and there are many variants of the same. Chicken, vagetables, paneer, and lamb are some of the popular variants that you can get in Bangalore. The delicacy is served with a tangy red sauce. Momos is a famous food in Bangalore and you’ll never have enough of them.

Further Read: Live The Bangalore Way: 10 Fun Places In The Silicon Valley For An Ultimate Whoopee

Q. What are the famous street foods in Bangalore?

A. Some of the most popular street foods in Bangalore are Samosa Chaat, Bhelpuri, Dosa, and Uttapam.

Q. Which are the famous restaurants in Bangalore?

A. Some of the popular restaurants in Bangalore are Karavalli, JW Kitchen, The Only Place, and Smally’s Resto Cafe.

Q. What is the best time to visit Bangalore?

A. The best time to visit Bangalore is from March to May and from October to February as the temperatures are favourable during this time.

Q. Is Bangalore worth visiting?


A. Yes, definitely. Bangalore is one of the world’s major IT corporations and one of the cleanest cities in India.

Q. What is the famous sweet dish in Bangalore?

A. Halbai is an exotic and very famous sweet dish from Bangalore that you must try.

33 Best Picnic Spots Near Mumbai In Summer That’ll Provide You Respite From Heat In 2020!

22 Alluring Places To Visit In Dalhousie In 2020 With Your Travel Buddies!

Skandagiri Trek: A Night Trek For All Stargazers And Adventure Seekers In 2020!

16 Spectacular Offbeat Places Near Mumbai To Be Explored In 2020