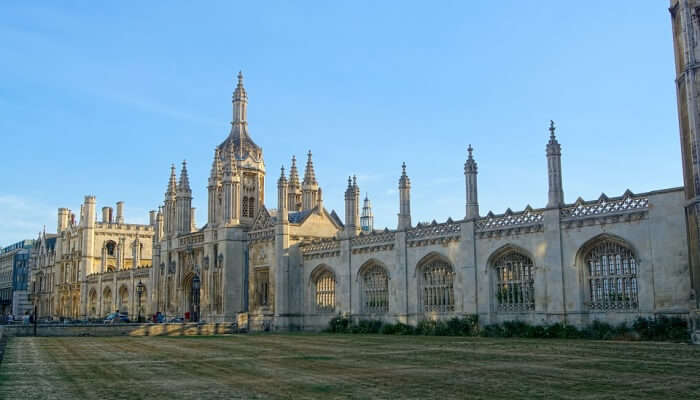 Cambridge is one of the popular cities of the UK on the River Cam in eastern England. Home to the prestigious University of Cambridge, dating back to 1209, tiny Cambridge city remains famous globally due to this renowned university. Cambridge lays claim to having one of the highest concentrations of the preserved historic buildings anywhere in England for showcasing its romantic and medieval character.

The architectural splendour centred around the Cambridge University’s 31 colleges, each rich in tradition is unmatchable, the beauty of this city is enhanced through the darling outlook of Fitzwilliam Museum to Kings College, Cambridge Cemetery including Jesus Green and Midsummer Common, Sheep’s Green, Lammas Land, Christ’s Pieces, Parker’s Piece, the University Botanic Gardens having been developed much and extended through constant improvements to the Backs et al are worth visiting places to visit in Cambridge. Furthermore, Cambridge is also famed for its choir and towering attractions.

10 Places To Visit In Cambridge

Below are some of the best tourist destinations in Cambridge which you must explore during your vacation!

Image Source
The Fitzwilliam Museum is world-renowned and most famous museum in Cambridge that is considered as one of the classic tourist attraction in the region. This museum is a masterpiece of architectureRiver Cam that contains a magnificent collection of the English pottery besides Chinese, Greek, Roman and Egyptian antiquities. Being one of the sought after places to visit in Cambridge, this museum has illuminated manuscripts, beautified with Italian and Spanish paintings and much more. Its exceptionally fine gallery has the works by Hogarth, Gainsborough, and Turner amongst others as well as Impressionists and Dutch Masters of the Baroque including Rembrandt, Van Dyck, and Rubens.

Image Source
Founded in 1441 by Henry VI and the earliest of the royal foundations, King’s College is worth visiting for the huge expanse of its lawn extending down to the river and King’s Bridge, with its lovely views of the Backs, different college grounds along the riverside. Distinguished alumni of King’s College include writer Horace Walpole, poet Rupert Brooke, and economist Lord Keynes et al.

King’s College Chapel, renowned for its 12-bay perpendicular-style interior, as well as its breathtaking fan vaulting by John Wastell (1515), is worth exploring to know history and observe the rich architectural beauty. The lovely tracery on the windows and walls look amazing here. The spectacular 16th-century stained glass windows; the lavishly carved 16th-century wooden organ screen and choir stalls and the altarpiece besides Rubens’ Adoration of the Magi are all amazing seeing worth believing.

Location: King’s Parade, Cambridge CB2 1ST, United Kingdom
Timings: Throughout the day
Nearby Hotels: Several hotels are located nearby at a distance of less than 20 km.
Nearby Attractions: Notable attractions especially Cambridge University and its Colleges & other historic monuments.

Suggested Read: 10 National Parks In United Kingdom That Will Bring You Closer To Nature

3. The University Of Cambridge

Image Source
The University of Cambridge is steeped in history as the oldest and world’s leading university for learning and research in the United Kingdom that had been founded in the year 1209. Amazing environment for study, fresh air, iconic colleges and gorgeous architectures are what most fascinating elements to see here. Standing apart by imparting quality education over the last 600 years, the grandness and opulence come out of its mortar.

Considered one of the best places to visit in Cambridge, the University of Cambridge is made up of 31 colleges out of which the most famous ones are Trinity College, King’s College, Queen’s College and Robinson College et al.

Location: The Old Schools Trinity Lane, Cambridge CB2 1TS, England
Timings: Throughout the day.
Notable Attractions: The campus punting tour is amazing and flows 2 miles over the River Cam by passing through the King’s College, Trinity College, Queen’s College, the Mathematical Bridge, the Bridge of Sighs, and several other amazing sights along the river.

Image Source
The idyllic River Cam of Cambridge flows through the heart of Cambridge. The River Cam is the city’s lifeline as one of its most captivating natural landmarks in the region. For the visitors to Cambridge, the quintessential local activity includes punting along the River Cam – a chauffeured cruise in a flat-bottomed boat or ‘punt’, propelled along by a 5-meter-long pole. A romantic, slow-paced punting tour is ideal for sightseeing as you’ll float downstream with plenty of time to snap photos and admire the riverside landmarks while the grassy banks make an idyllic picnic spot during the summer months.

The Cambridge University Botanic Garden is sprawled over an area of some 40 acres. Beautifully landscaped, it is a must-see location, especially for gardening enthusiasts. Established in 1831, this garden showcases an impressive collection of more than 8,000 species of plants from across the globe. Charming and inspirational scenes of wandering through the garden’s many glasshouses and trails make you feel elated. The excellent Garden Café and Botanic Garden Shop delights every visitor.

Suggested Read: 15 Vibrant Festivals In United Kingdom In 2022 That Are Rejoiced With Ultimate Splendor

Image Source
St. John’s College had been founded in the year 1511 by Lady Margaret Beaufort, mother of Henry VII. A richly ornamented gateway, it is a fine example of Tudor architecture. Its dining hall has an excellent hammer-beam roof beside the beautiful panelling, and some fine portraits make it an amazing location. The Combination Room has a splendid plaster ceiling with the festoons of vines. Second Court, built-in 1602, is an exceptionally attractive one with its mellow brickwork. Among the notable members of St. John’s were dramatist Ben Jonson and poet William Wordsworth, who described his college rooms in his famous Prelude.

Image Source
The Museum of Cambridge has in displays and exhibits that focus on the everyday lives of the local masses from the 18th to 20th centuries. In the old White Horse Inn, the museum features an extensive collection of artefacts, including coinage, costumes, medals, toys, and medicine, along with numerous interesting artworks.

Also worth visiting, the Cambridge Museum of Technology focuses on the county’s industrial past. Housed in a Victorian pump house, this museum displays a working steam winch, plus a variety of other engines and a collection of antique printing equipment. The Whipple Museum of the History of Science is also worthy of a visit for its fascinating collections of old scientific artefacts, including instruments and prints that date back as far as 17th century.

Suggested Read: London In March 2022: All You Need To Know About The Square Mile In Spring

Image Source
National Horse Racing Museum at just 13 miles east of Cambridge, Newmarket has been a centre of English horse racing since 1174. Horse racing fans will enjoy visiting the National Horse Racing Museum on the picturesque High Street. Exhibits relate to the history of “sport of kings” as one of the most popular sports in Britain. The collection includes paintings of famous horses and jockeys, old saddles, tack, and trophies are interpreted using the latest interactive and audiovisual technologies fascinating to show about horse racing.

Image Source
St. Mary the Great Church is both a parish and university church. Built-in 15th century, it has fine interiors and its galleries being added in 1739 given by the great scholars attracted huge congregations for several centuries. The tower, erected in 1608, is famous for its views over Cambridge. Also, worth a visit is Little St. Mary’s. Known as St. Mary the Less, this Anglican parish church is famous for its many fine stained glass windows.

The Round Church, the Church of the Holy Sepulchre is one of the only four Norman round churches left in England. Built-in 1131, its rectangular chancel was added in the 15th century. Another important church, the Gothic Revival Church of Our Lady and the English Martyrs – one of the largest Roman Catholic churches in Britain that had been built in 1885 houses a rare statue of the Virgin Mary.

Cambridge American Cemetery and Memorial of the World War II grave cemetery is flocked by a large number of visitors. Covering 30.5 acres donated by the University of Cambridge is immaculately maintained. This cemetery contains the remains of 3,811 of the war dead; 5,127 names are recorded on the Walls of the Missing. Rosettes mark the names of the recovered and identified. The great outlook of exhibits that incorporate personal stories, photographs, films, and interactive displays, visitors gain a better understanding of this critical campaign that contributed to the Allied victory in Europe during the World War II.

Visiting Cambridge literally takes you to a bygone era. Several monuments and important locations are considered to be amongst the notable places to visit in Cambridge. Your trip to England will definitely be a memorable one if you add the above-mentioned places to your Cambridge expedition plan!

Frequently Asked Questions About Places To Visit In Cambridge

Is Cambridge University open to public?

The Centre offers help and advice on making the most of your time in and around Cambridge, including official guided tours, accommodation reservations, public transport, maps and guidebooks, discounted chauffeured punt tour tickets and more.

What is Cambridge famous for?

Cambridge is famous for its University of Cambridge which is currently one of the best universities in the world. The university has been producing scholars in almost all streams of education including science and technology thus many renowned scientists boast their association with this university.

What is the topmost art in the Fitzwilliam Museum?

There is a wonderful collection of arts, ancient military weapons, ceramics and Greek, Roman and Egyptian relics in this museum.

Are there covered boats for the river trip?

You can obtain covered trips for Cambridge River Trips as such facilities are offered if sought.

Which is the best college to visit in Cambridge?

What is better Oxford or Cambridge?

However, there is a common perception that Cambridge is slightly better for sciences, while Oxford is marginally stronger for social sciences and humanities – but both Universities insist there is no significant difference.

Can one swim in the River Cam?

Swimming! Yes, Swimming is very much interesting activity in the River Cam.